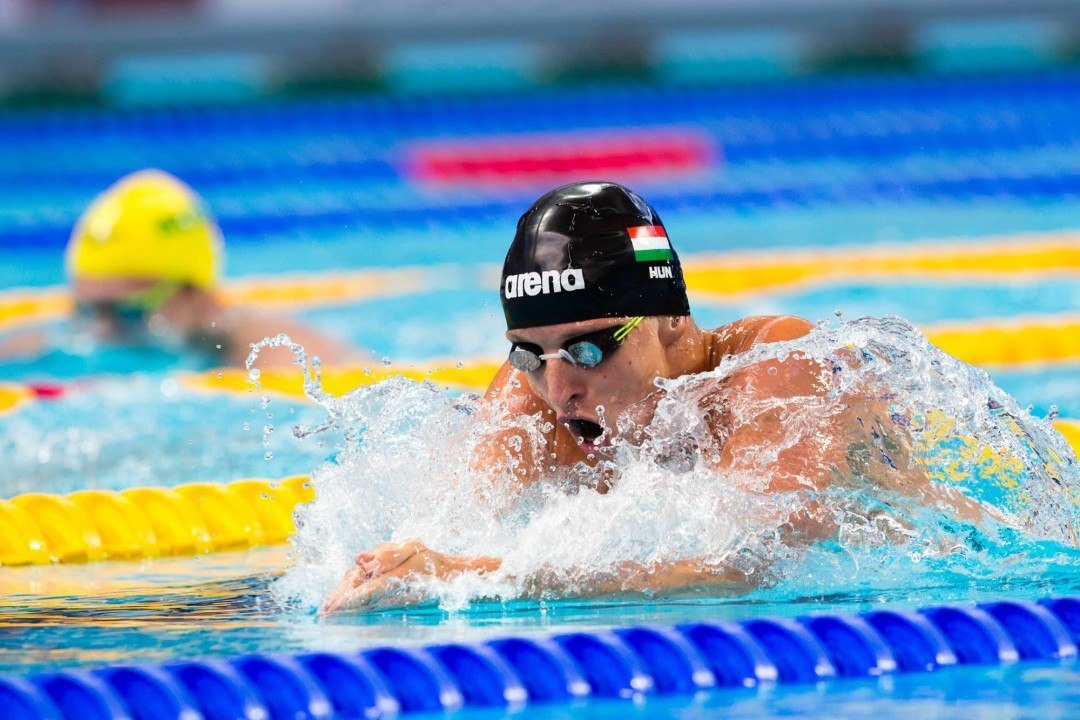 Hungary's David Verraszto and Japan's Daiya Seto gave the crowd an exciting battle in the men's 400IM at this year's Sette Colli meet in Rome. Archive photo via Tim Binning/TheSwimPictures.com

With 20 days to go until the 2017 World Championships, some swimmers aren’t shy about putting their competitors on notice during the final tune-up meets leading up to Budapest. Such was the case today in Rome, as several of the sport’s biggest names came down like a ton of bricks on the Sette Colli record book during day 2 finals of the annual international swim meeting.

The men’s 400m IM was perhaps the race of the night, as two competitors crushed times in the 4:07 range, the fastest in the world this season by a relatively big margin. Headed into tonight’s 400m IM final, Hungary’s David Verraszto held a season best of 4:10.01, while his Japanese rival, Daiya Seto, carried a season-based of 4:10.17.

Taking no prisoners during tonight’s race, both men cranked out times well beneath those thresholds. Verraszto won tonight’s race in a huge 4:07.47, a new meet record, while Seto finished about a half a second behind in 4:07.99. Seto led through the butterfly, but the Hungarian took things up a notch to keep the Olympic bronze medalist at bay for the remainder of the 300m. Verraszto’s splits tonight were 57.11/1:03.44/1:09.66/57.26 for his final 4:07.47 mark, now his new personal best in the event.

Both Verraszto’s and Seto’s outings fall within the world’s top 25 performances of all time and each would have won bronze with their results had they been performed at the 2016 Olympic Games. In that Rio race, Seto earned 3rd place in a slower 4:09.71.

Host nation Italy saw a big win in the form of Olympic gold medalist Gregorio Paltrinieri‘s victory in the 1500m freestyle. Touching in a solid 14:49.06, Paltrinieri wiped out the old meet record of 14:50.59 held by countryman Federico Colbertaldo since way back in 2008. Tonight Paltrinieri was the only competitor to score a mark under the 15:00 threshold, but he’s already been even faster this year. At April’s Italian Nationals, Paltrinieri set the stage for Budapest with a wicked-fast 14:37.08, a time that still sits atop the world rankings throne.

The women packed the heat tonight as well, with Italian Ilaria Bianchi cranking out a 100m butterfly win in a time of 57.89. Tonight’s outing falls within Bianchi’s personal top ten performances of her career and represented the only sub-58 time of the field tonight. The next fastest was her teammate Elena Di Liddo who finished in 58.05 for silver. Bianchi’s time tonight falls just .01 faster than the 57.90 she produced at this spring’s Italian Nationals.

Dutch Olympian Ranomi Kromowidjojo moved up big-time in the women’s 100m freestyle world rankings, laying waste to her previous season fastest time while racing to gold tonight. Entering Sette Colli Kromo’s fastest time was the 53.72 she threw down in Eindhoven, but tonight she took things to a new level with a super quick time of 53.07. That checks-in as the 4th fastest time of Kromo’s career, her fastest since London 2012, and now places the Dutch star 4th in the current world rankings in the event.

Korea’s Park Tae Hwan doubled up on his 400m freestyle victory from last night with a win in the 200m event tonight. Clocking 1:46.89, Park was able to hold off a pair of British opponents, Nick Grainger and Duncan Scott, who finished in 2nd and 3rd with times of 1:48.30 and 1:48.47, respectively. 200m freestyle defending world champion James Guy wound up 4th in the B-Final in a time of 1:48.37.

Also earning a 2nd win was Britain’s Adam Peaty, who followed up his monster 100m breaststroke from last night with a win in the 50m splash n’ dash tonight. Peaty scored a time of 26.61 for a new meet record, beating the previous mark of 26.83. He’s been as fast as 26.48, a time which he earned en route to claiming a British National title earlier this year.

World ranking shake-ups took place in the men’s 200m butterfly race tonight, as Hungarian Tamas Kenderesi, the bronze medalist in this event in Rio, topped the field tonight in 1:54.33, a new meet record. The previous meet mark was held by Hungarian legend Laszlo Cseh (1:54.69). Cseh was scheduled to appear at this meet, but pulled out at the 11th hour due to illness.

Kenderesi’s time tonight beats his 1:54.89 from Hungarian nationals and now sits as the 2nd fastest outing this season, only behind Japan’s silver medalist Masato Sakai. South Africa’s Chad Le Clos notched his first sub-1:55 mark of the season, cruising to silver in 1:54.87. Le Clos took the race out quickly, blasting an opening split of 53.86 to Kenderesi’s 55.26. Le Clos wasn’t able to hold on, however, as he closed in 1:01.01 to the Hungarian’s 59.07.

I believe the 4:01.01 is incorrect for David Verraszto

David V. swam an excellent second half of his 400 IM.

I thought the article meant they crushed 4:07…