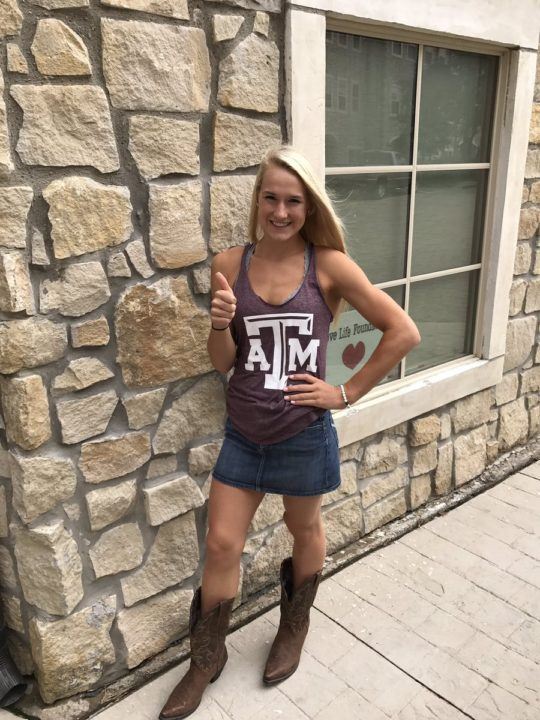 Gabrielle Kopenski, our #7 recruit in the high school class of 2018, has elected to remain in her home state...

Gabrielle Kopenski, our #7 recruit in the high school class of 2018, has elected to remain in her home state of Texas and will swim for Texas A&M beginning in the fall of 2018. Her social media post announced:

“I’m super excited to announce my verbal commitment to swim and further my academic career at Texas A&M! ❣️?? #GigEm”

Kopenski swims year-round for Texas Ford Aquatics. As a member of the U.S. National Junior Team, she won the bronze medal in the 1500 free at the 2015 FINA World Junior Swimming Championships in Singapore, and took fifth in the 800 free. This spring she won the 500/1000/1650 freestyles and 400 IM at College Station Sectionals, taking another 1.6 seconds off her IM time. She also competed in the 5K at 2017 USA Swimming Open Water Nationals, where she finished 24th.

Terrific decision to swim for & to go to school at A&M Gabrielle. Fantastic academics & swimming program in Aggieland. Congratulations on joining an “up & coming” program. Enjoy the experience!!

A&M has a very strong group of girls coming in over the next 2 years to join a team that was already 3rd at NCAAs. With Cal and Stanford both graduating many of the olympians over the next couple of years, A&M looks very strong. Now if Julia Cook would just stay in her home pool, the Aggies would likely be in a position to win at least a couple national championships.

This is BIG for the Aggies. Kopenski and Joy Field will be a great one-two punch in the distance events over the coming years.

Very exciting addition to the team! What a great event line up for the Ags, welcome to the Aggie family!

Awesome for you to encourage her Sarah, I think she will help the Aggies tremendously and help out the distance group.

Mmh Leah Smith… not so open