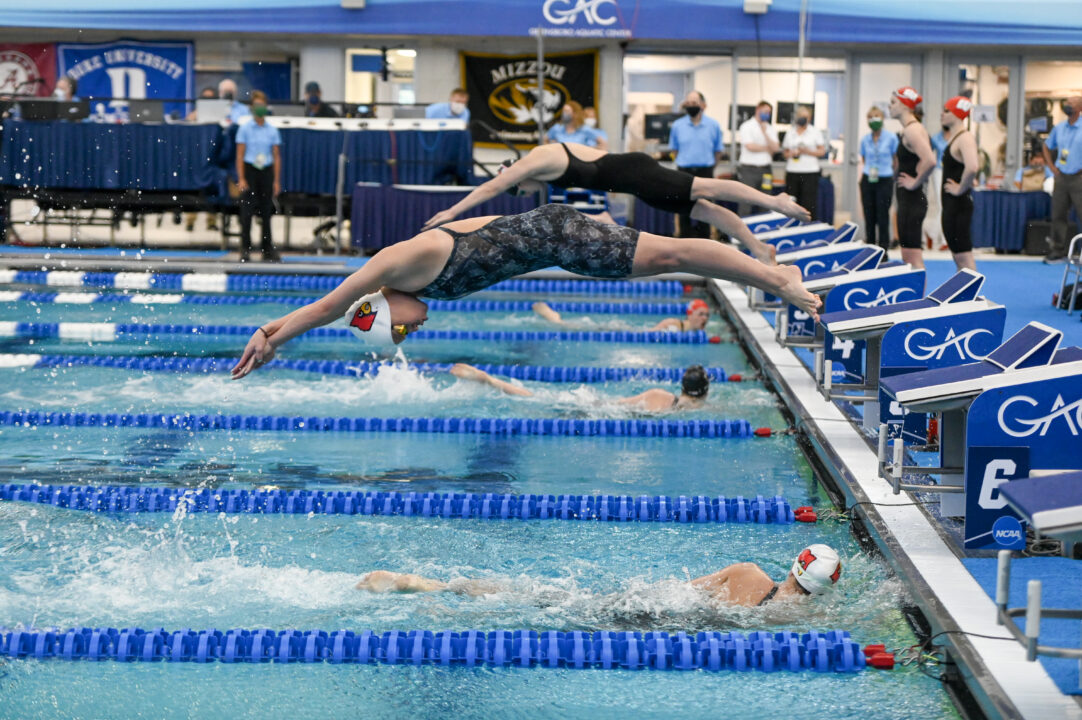 The Louisville Cardinal are crushing their seeds through 2 days at the 2021 NCAA Women's Swimming & Diving Championships, and have a chance to sneak in to the top 5. Current photo via NCAA

2021 won’t go down as the fastest NCAA Championship meet ever, and after a Cal relay DQ, it appears that the team title battle isn’t going to be in question, barring a disaster for the Virginia Cavaliers.

But there have been some fun races, capped off by the fastest-ever 400 medley relay from NC State, and a nice moment for senior Julia Poole (who in her words, ‘wasn’t supposed to be on this relay’), with a new NCAA Record.

While Virginia looks ready to win the team title, there are great team battles brewing for the minor positions at the meet. That includes NC State, a team battling back from a pointless 800 free relay to open the meet, that now sits in 2nd.

Here’s the data. More analysis after the jump.

NC State took over 2nd place thanks their session-ending relay win, and now they and the Cal Bears are separated by just 10 points after each had an ’empty’ relay (NC State didn’t score in the 800, though that was a function of their lineup choice rather than a DQ).

Squarely in between them are the Texas Longhorns, with the best diver of the trio.

Aside from the DQ, none of those three teams are blowing away their seeded points, but none are getting beat up too bad by their seeded points either. Each team had a highlight on day 2 (Cal and NC State each won relays, Texas’ Evie Pfeiffer picked off Brooke Forde to place 2nd in the 500 free), and each team missed some opportunities to take control.

It’s going to come down to the wire between those three. We’ll get some more crucial data on day 3, but after the relay swim from Sophie Hansson, the Wolfpack look really great. Izzy Ivey has a tough double with the 100 fly and 100 back scheduled for Friday, and she’ll need to upset some swimmers to keep Cal in the hunt for 2nd.

In the lower ranks, there are some really fun battles to be had. Kentucky, currently ranked 10th and consistently moving up versus seed, should have big swims the last 2 days. The spoiler team is Louisville. They were only seeded to score 14 points through the first 2 days of competition and that number has already bloomed into a whopping 62 points. If they were to keep that pace up for the rest of the meet, it would put them at around 240 points and they would become serious spoiler contenders for a top 5 placement after being seeded just 16th coming into the meet.

There are opportunities. While the opportunities to catch Virginia have all-but-evaporated, there are smaller opportunities all around the last 2 days of this meet – owed in part to an overall lag in times (very few personal bests have gone on the board). If any team, like a Louisville, catches fire, they have the opportunity to move up in a hurry.

Louisville consistently outperforms their seed at NCAAs. They arguably have the most consistent NCAA taper of any team. It’s how they place so high with only a couple stars.

Terrific analysis, thanks. This has to be one of the most interesting years ever to watch this meet unfold. Prelim swims and relay finals get more interesting every day.

For sure. Because, almost everyone is adding time…but someone has to move up in the rankings, right? So there’s this battle to “add the least time.”

It’s cool to see Teri fully hand over teaching relay exchanges to her assistant. You can see the old MIT performances in these Cal women. Very cool!