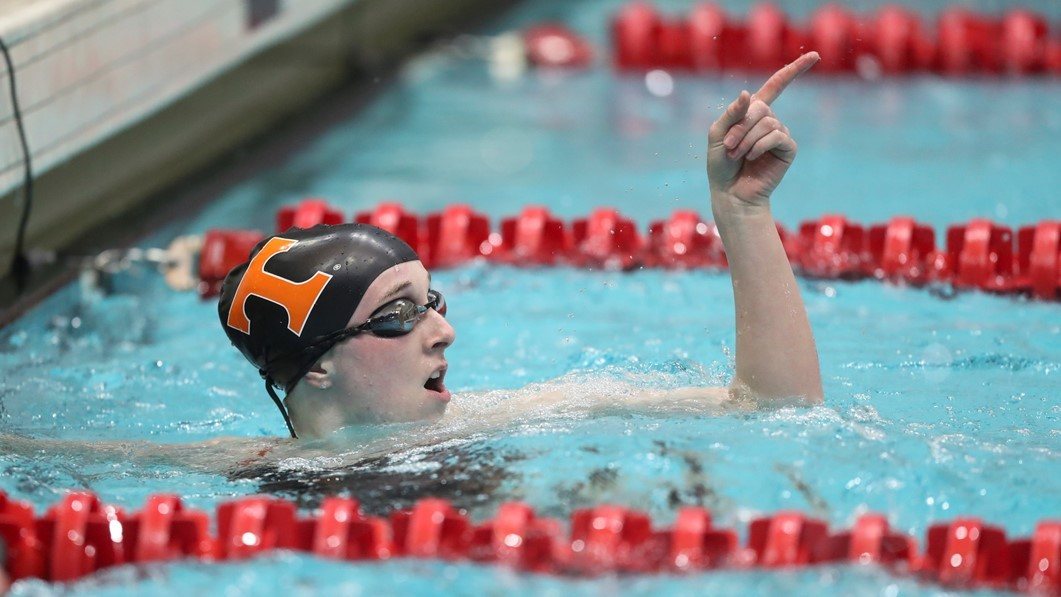 Now that all the major mid season invites are complete, pretty much every team in the country has had a... Current photo via John Golliher/Tennessee Athletics

The next conference on the list: the SEC. From a team competition point of view last year’s SEC meets were pretty dull affairs (there were other sources of excitement to keep swim fans interested). The Texas A&M women won their third straight title by nearly 300 over Georgia. Florida won the men’s meet by 243 points over Texas A&M for their 6th straight title.

This year by contrast is set up to be an absolute barn burner for both the men and women (article about the men’s meet). The Tennessee women, Missouri men, and Texas A&M men all have strong chances at their first ever SEC title. The women’s meet could plausibly be won by 4 different teams. There are 5 men’s teams within striking distance of 1st right now. I don’t know which conference meet will be the fastest this year, but the SEC is definitely the most interesting.

In the current SEC women’s Swimulator projection Tennessee lead the way with 981 points followed by Texas A&M with 928.5, Florida with 822.5, and Georgia with 821.5. Florida and Georgia have won 29 of 38 all time SEC women’s championships and Texas A&M have won the last 3 titles. The Tennessee women have never won an SEC crown. Let’s take a look at each team’s chances this year.

The Tennessee women graduated 76.5 individual swimming points last year, and their freshmen are projected to score 74.5 points, a nearly exact replacement of their losses. Despite this equality, Tennessee’s projected points total is 184 higher than last year, so the improvement has come from returning swimmers. One source of points gain has been the break out of former #5 recruit Nikol Popov. Popov didn’t score at last year’s SEC championships and is now projected to 64.5 points.

The defending champions entered this year as the SEC favorites and Tennessee’s projected points lead isn’t big enough for A&M to be anything less than a co favorite right now. A&M return 732 individual points from last year’s SEC meet, 160 more than Tennessee. The Aggies’ freshmen project to score 56.5 points this year, not a ton, but also not many fewer than Tennessee’s freshmen (74.5). A&M’s reduced point total this year is mostly because of the graduation of 309 individual points. With A&M’s returning point’s advantage and Tennessee and A&M’s highly similar diving and freshmen totals, it’s easy to see a 4th straight title for the Aggies.

This meet could be decided by the relays. Tennessee project to 302 relay points and A&M project to 234. Tennessee have 3 top seeds and 2 second seeds in the relays. A&M’s best relay is ranked 4th and their worst is 10th. For a team with the most projected individual points, those relay rankings seem low. There is some room for A&M to pick up points here, while it’s hard for Tennessee to improve their already near maximum relay points.

There is reason to believe that A&M’s relay weakness might stick. As a team they are much better at longer distance races. They are seeded to score more points in the 200 than the 100 in 3 of the 4 strokes, and in the one stroke where the 100 is better, back, it’s a case of being weak in both the 100 and 200 rather than a strong 100 (100 back projected points: 16, 200 back: 4). To be fast at relays you need sprinters, and this team doesn’t have that many. This is a team built on breaststroke, IM, and distance events. While they are very good at those things, the NCAA format rewards teams like Tennessee that are strong in sprinting events (projected points in the 50 free: Tennessee 117.5, Texas A&M 12).

While Tennessee and Texas A&M are the top tier contenders, Georgia and Florida are close enough that they can’t be dismissed automatically. Florida were 7th last year, but with the strongest group of freshmen in the country so far this season, they have quickly returned to (fringe) contender status. Their freshmen project to 234.5 points, top in the conference.

The main argument for Florida is the the unknown. Their long time coach Greg Troy retired from college coaching this year, so their taper history isn’t very useful in predicting their performance this year under new coach Jeff Poppell. Last year they under performed their projected total by 64 points, but with a new coach and lots of freshmen, who knows what they’re capable of this year?

With 85.5 returning diving points, Florida aren’t a diving power, but they are good enough that diving isn’t an Achilles’ heel. Similarly to Texas A&M, their fatal flaw may be sprint free. They project to score only 5 points in the 100 free and 11.5 in the 50 free. This hurts their relays which project to 238 points, well behind Tennessee’s 302.

Georgia are typically a team that focus on nationals instead of the SEC championships. However, this is a down year for Georgia, and right now they only have 4 swimmers with times under last year’s qualifying times, and only 2 relays with cuts. Same as with their men’s team, if the Georgia women want to even be invited to the big show, they’ll need to show up at conference.

This change in incentives should help reverse Georgia’s backslide vs projections. Last year at this time they were projected to score 1011 swimming points at conference and ended up with 940. Also in their favor, they may be under seeded a bit this year due to a relatively flat mid season meet where only 34% of their swims were faster than their mid season meet last year.

Of the top 4, Georgia are the weakest diving team with only 74 returning diving points, but the deficit isn’t insurmountably large. They are deep enough so that if they have a meet where everyone is swimming fast at once, they should be able to catch the top teams. Their sprint group isn’t as much of a liability as Florida and Texas A&M’s. They have 2 top 12 swimmers in the 50 so far.

Florida actually has depth this year in a lot of places they typically don’t – breaststroke for instance – and that’s going to pay dividends at conference because they’ll be able to slot girls into their best events instead of just trying to fill holes. If their second tier can follow the lead of the top end and the improvements they’re making, their overall depth could actually split the difference between Tennessee and TAMU and challenge for the conference title. That would be one hell of a come-up.

UF has the best coaching in Poppel for sure but they are not ready to take on the BIG ORANGE GIRLYVOL FIGHTIN MACHINE…yet.

I guess we’ll find out when Tennessee swims Florida on February 2nd!

NO WAY the TENNESSEE GIRLVOL Machine can lose! Heckfire with Downtown Brown, LittleBIGsmall, StickoutyertongueBANIC and a host of others they are unstoppable. Time for them to take and put up a banner in the Jones Pool. I say Girl Vols by 20.

Nothing is guaranteed! As of now, the women’s SEC Championship runs through College Station, Texas; not Knoxville, Tennessee. All it takes is one DQ in a relay & “poof”! That advantage just disappears. We’ll see what’s up early next year. Hold on tight!!

Agree – it gonna be a goodun!! Although TN GIRLVOLS win by 15