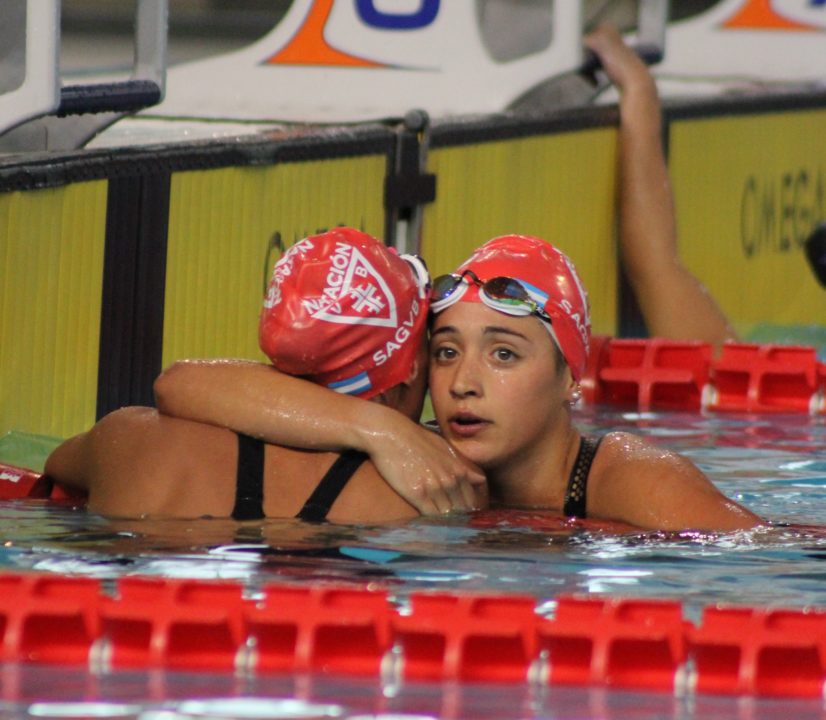 Sebastien, Bardach, and Grassi will be repping Argentine at their second straight debut while Pignatiello will make her Olympic debut. Archive photo via Andrés Tomasone

As confirmed by the official Tokyo 2020 entry list, 3 women and 1 man will represent Argentina at the Olympic Games this summer. On the women’s side, Julia Sebastian, Delfina Pignatiello, and Virginia Bardach Martin will represent the nation while Santiago Grassi will be the sole entrant for the men.

All of Argentina’s 2020 Olympians with the exception of Pignatiello will be making a return to the Games 5 years after racing in Tokyo.

Her entry time for Tokyo is quite a bit faster than what she swam 5 years ago, sitting at a 4:41.05. She swam that time back in 2019 at the Pan American Games in Lima Peru which was good enough for a silver medal. Notably, Bardach holds the Argentine national record in both the 200 butterfly (2:10.80) and 200 IM (2:13.46) but not the 400 IM. The current national record holder in the event is actually Virginia Bardach‘s sister Georgina who swam a 4:37.51 at the 2004 Olympics. That swim for Bardach was quick enough for a bronze medal at the 2004 Games.

Unlike Bardach, Julia Sebastian will be swimming more events in Tokyo than she did in Rio. Sebastian is entered to race both the 100 and 200 breaststrokes, compared to her last Olympic appearance where she only raced the 200. In Rio, she placed 21st overall with a 2:27.98, and this year she will enter with a 2:24.92 in the event. That time for Sebastian is a national record in the event which she set at the 2019 Maria Lenk Trophy in Brazil.

Santiago Grassi is also set to race more events this year than he did 5 years ago as he’s adding the 50 freestyle to his lineup, having solely raced the 100 fly in Rio. Grassi holds the 100 butterfly national record for Argentina at a 51.88 which he posted at the 2019 Richard Quick Invitational. That time is a bit quicker than the 52.56 he swam at the 2016 Olympics for 24th overall.

Grassi’s entry time and PB in the 50 freestyle is a 22.28 which he swam at the 2019 Pan American Games for 6th place in the final. That time for Grassi is a bit slower than the 22.18 national record held by José Martín Meolans from back in 2008.

Delfina Pignatiello will be the sole Argentine swimmer making her Olympic debut in Tokyo and will be swimming the most events out of anyone on the roster. Pignatiello is entered to swim the 400, 800, and 1500 freestyle triple as the national record holder in all 3 of those events.

Argentina has collected a total of 3 Olympic medals in swimming including Georgina’s 400 IM bronze back in 2004. In addition to that bronze, Alberto Zorilla won gold in the men’s 400 freestyle back in 1928, and Jeannette Campbell took silver in the women’s 100 freestyle in 1936.