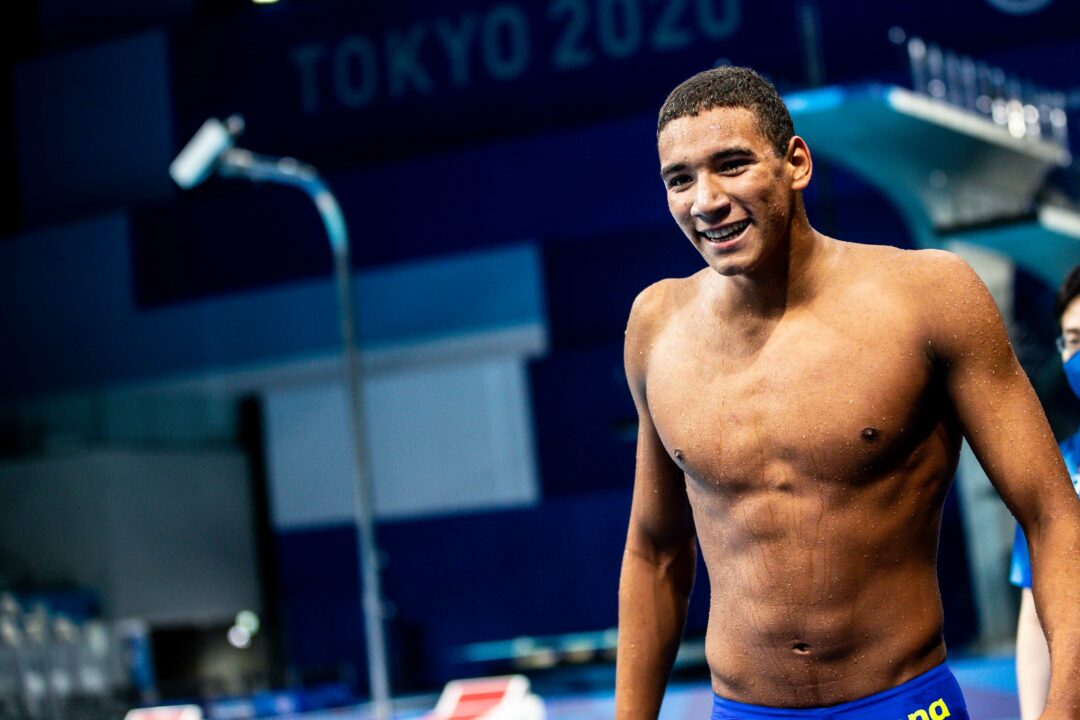 Two World Champions in the form of Tatjana Schoenmaker and Ahmed Hafanoui are absent from the list of entrants for 2022 Worlds. Current photo via Jack Spitser/Spitser Photography

FINA has uploaded the list of swimmers who have entered to race at the 2022 World Championships. To check out the list you can follow this link to get to the main meet page, select “Athletes”, and select “Swimming” under the “Discipline” filter. You can then see a full list of who is expected to race at the meet and you can also filter the list by nation.

Among those swimmers who are notably absent from this list are Olympic champions Tatjana Schoenmaker and Ahmed Hafnaoui, along with Olympians Kaylene Corbett and Bjorn Seeliger.

Schoenmaker disclosed earlier in 2022 that she wouldn’t be racing at this meet, but then she appeared on the South African roster that was released. Schoenmaker won gold in the 200 breaststroke at Tokyo 2020, hitting a new world record of 2:18.95. She also took silver to Lydia Jacoby in the 100 breaststroke, swimming a 1:05.22.

Kaylene Corbett of South Africa is also absent from the list of entrants. Corbett raced to a 5th place finish in the 200 breaststroke at the Olympics in 2021, hitting a 2:22.06 in the final. Corbett was expected to race that event again in Budapest but according to FINA entry lists, won’t be there.

Considering that medalist Annie Lazor didn’t make the team, Evgenia Chikunova is not able to race, and Fanny Lecluyse has retired, only 200 breaststroke finalists from Tokyo 2020 will be back in the event this year in Lilly King, Molly Renshaw, and Abbie Wood.

Ahmed Hafnaoui was one of the biggest storylines of the Olympics in 2021 when he soared to victory in the men’s 400 freestyle, hitting a 3:43.36 to defeat Australia’s Jack McLoughlin (3:43.52) and Kieran Smith of the USA (3:43.94). Hafnaoui, a Tunisian, is scheduled to take his high school graduation exam at the end of this month so that he can begin school at Indiana University in the fall, according to a person at Indiana. He is also not entered in the Mediterranean Games at the end of the month, which is a high-priority event in Tunisia.

Another absence on this list of swimmers is Swedish Olympian Bjorn Seeliger who was listed on the Swedish World Championships roster that was released in May. Seeliger swam the 50 freestyle for Sweden at the Tokyo Olympics, placing 23rd in a 22.19. This would have been Seeliger’s debut World Championships.

Swimming begins in Budapest on June 18 and runs through the 25th.

Both Sates and Schoenmaker have already said that so it’s probably the same for the others as well.

Seeliger will swim the mens 400 fr relay, though no individual events. “to minimalize the risk of being burnt out” as he puts it in a recent interview. He is eyeing further down the road, aiming for Paris ’24.

No Hafnaoui is a bummer because I don’t think there’s another chance for him to get high level LC racing in this year. It makes sense given what junglecat commented, but selfishly I wanted to see if he could build off of his success from the Olympics and short course worlds.

The article mentions he is also not entered in the Mediterranean Games.

Does anyone know why Oleksiak doesn’t swim fly anymore? I remember seeing her at 2016 Olympics swimming the 100 and thinking “oh my, her stroke is beautiful”. Happy to see her in the 100/200 FR!

She won’t be contesting the individual with Summer and Penny in those slots, but it will be great to see her again contend for a spot on Canada’s 4*2 finals team!

ARE YOU KIDDING ME. That is great, this race just got better.

Hafnaoui will take his high school graduation exam at the end of June to get his diploma, so that he can enroll in Indiana University this year.