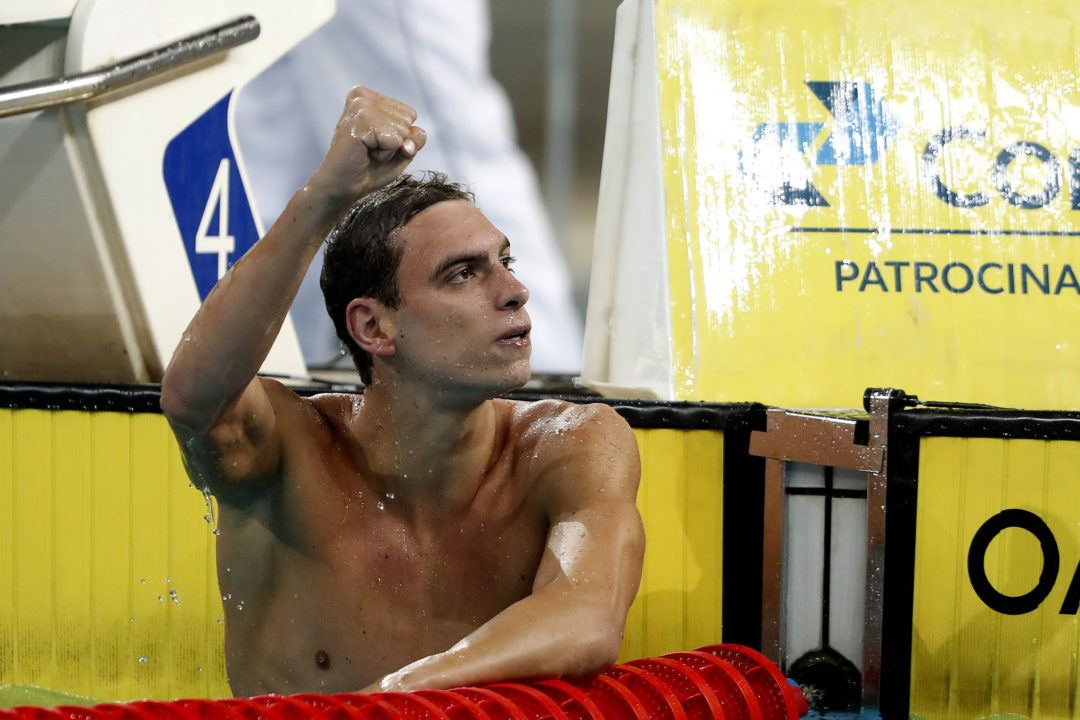 Fernando Scheffer (above) and Breno Correia qualified for their first Olympic roster in the 200 free, besting the FINA A cut by .79 and .35, respectively. Archive photo via Satiro Sodré/SSPress/CBDA

With two days of racing down at the 2021 Brazilian Olympic Trials, Brazil’s Olympic squad has grown from two to six swimmers.

Fernando Scheffer and Breno Correia mirrored their 1-2 finish at the 2019 Pan American Championships in the 200 free, earning spots on Brazil’s Olympic roster. Scheffer’s time of 1:46.28 ranks him 16th in the world this season.

Correia’s chopped half-a-second off his previous lifetime best from the 2019 World Championships to earn 2nd. Both swimmers were well under the Olympic qualifying time of 1:47.02. Correia’s time of 1:46.72 ranks him 19th in the world this season:

The 100 backstroke prelims foreshadowed National Record-holder and 2016 Olympian Guilherme Guido would run away with the win, but it was 4th seed Guilherme Dias Masse who overpowered him at the end. In true photo-finish style, Dias Masse wore down Guido’s .33 second lead to .01.

Not only was it physically a close race, but they also had a tight race with the clock as well. Dias Masse beat the Olympic qualifying time of 53.85 by .01, meaning that Guido tied it to the hundredth of a second. This still qualifies him for the Olympic roster.

Dias Masse is now ranked 17th in the world this season and Guido is 18th:

There are still 4 more days of competition left for swimmers to secure a spot on Brazil’s Olympic roster. Racing continues tomorrow morning at 9:30 am local time (8:30 am EDT) with the women’s 200 IM, men’s 200 butterfly, and women’s 200 freestyle.

Remember when the Brazilian men broke the WR in the 800scm relay? That was wild.

13
-1
Reply
Troll in the Dungeon
Reply to  DCSwim

where russian guys 100m back?

I think he is 16th in the 200 free. The four Brits are missing from your list from last week….