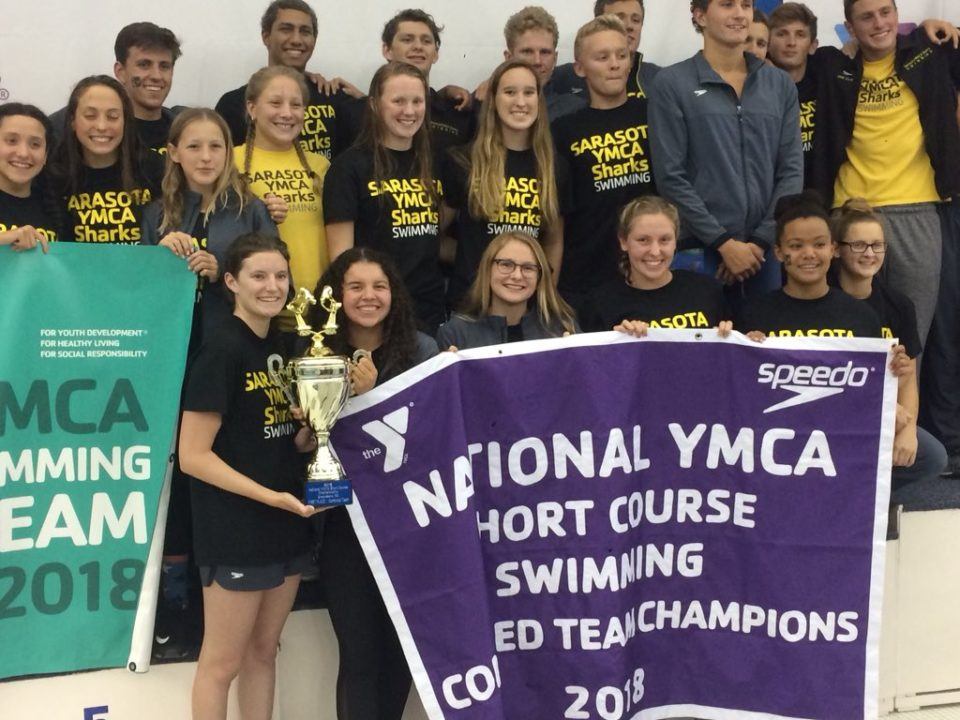 Out of the 3 team titles awarded at the 2018 YMCA Short Course National Championships that finished on Saturday in... Current photo via Sarasota YMCA Sharks

Out of the 3 team titles awarded at the 2018 YMCA Short Course National Championships that finished on Saturday in Greensboro, North Carolina, 1 was competitive, while the other 2 were not.

In the women’s team battle, the Cheshire YMCA beat out the Greater Spartanburg YMCA by just 8 points. Cheshire didn’t wind up scoring any points in the meet’s last event, the 1650 free, and while Greater Spartanburg’s Rachel Reistroffer finished 8th for 11 points in that race, it wasn’t enough to overcome the 19-point deficit. The two teams had a great battle late in the meet, in the closing 400 medley relay, where a 49.53 anchor from Cheshire’s Sophie Murphy, who is only 14-years old, overcame a full-second deficit to Greater Spartanburg to win the race.

For Cheshire, they moved from 4th at last year’s meet into the champions spot, while Greater Spartanburg finished 2nd for the 2nd-straight year. Last year’s women’s champions from the York YMCA finished 3rd, while last year’s 3rd-place finishers from the Boise YMCA fell to 4th. The top 4 teams, in a different order, were all the same as last year; the first major interloper was 5th-place Springfield (Illinois) YMCA – the club famous for producing 2016 Olympic gold medalist Ryan Held.

Sarasota repeated as men’s champions, though the gap closed after they nearly doubled the field last year. Sarasota dropped over 100 points to finish with 401 this year, but that still gave them more than a 100-point margin of victory over runners-up Somerset Hills, who were just 6th last year.

Top 5 team scores are below; for full final team results, see the end of the results document here.