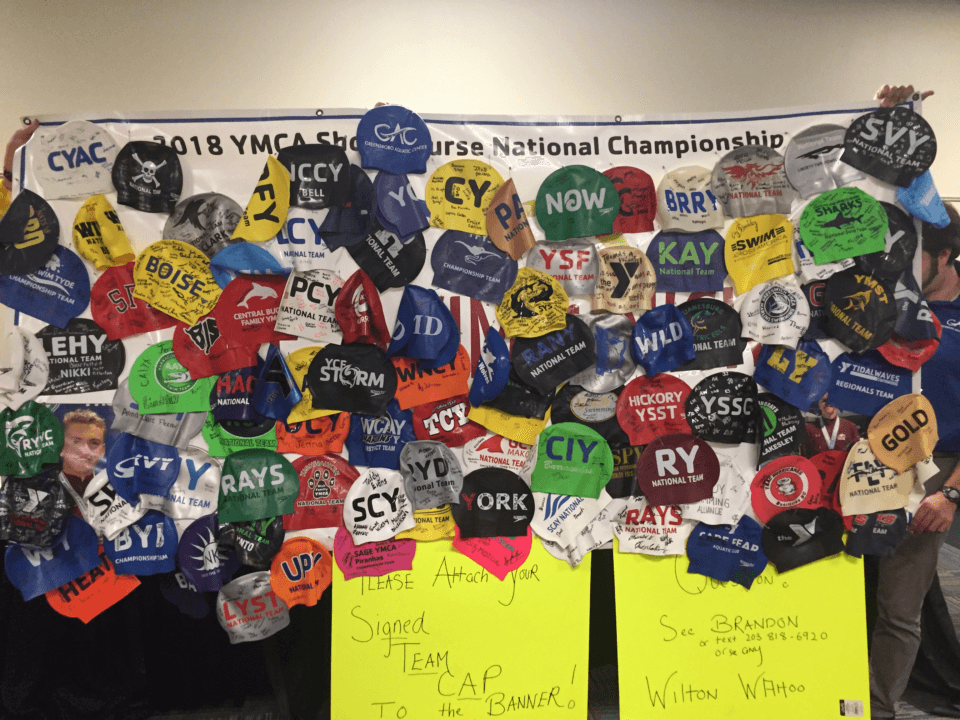 Swimmers at the YMCA National Championships put their competitive rivalries aside last week to create a memorial devotional and banner for Nick Dworet, the high school senior and swimmer slain in a school shooting in February. Current photo via Brandon Berger

Braswell’s best time coming into the meet was 4:19.21, which she swam at last year’s Y Nats. She dropped a 4:15.78 in prelims, which was already a decent drop, until she dropped almost another 7 seconds in finals.

Dworet was a senior at Marjory Stoneman Douglas High School in Parkland Florida, as well as a verbal commit to the University of Indianapolis to continue his career in college. He was killed when a former student opened fire in the high school on February 14.

To honor his memory, Wilton Y junior Brandon Berger put together a devotion he presented at YMCA Nationals honoring Dworet’s commitment to swimming and to being his best self. That devotion is included below.

Berger also set up a banner at the athlete’s village, hoping to unify all the attending teams and swimmers in support of Dworet and his family. Berger asked teams to sign a swim cap and attach it to the banner, which will be presented to Dworet’s family. We have pictures of the original banner and the banner with the signed caps attached, also included below, courtesy of Berger.

The devotional, courtesy of Berger:

Hello, my name is Brandon Berger and I am a junior on the Wilton Y Wahoos.  It is an honor for me to share words of inspiration, reflection and gratitude during these opening ceremonies with you, my fellow swimmers, coaches, especially my own coach, Randy Erlenbach, and the thousands of supporting family members watching tonight. Together, over these 4.5 days, we will live out our athletic goals and witness the culmination of months of training, morning practices, and balancing the heavy demands of school, work and activities. All in all, this is a testament to our unwavering desire to be our best selves. When I tell my non-swim friends about doubles or 5 am practice, they all have the same response, “why would you ever put yourself through that?” For a while, I had no response to that question, but then I realized how fortunate we are for the privilege to commit to something so deeply, to set and work for challenging goals, to be supported by great coaches and to witness what it actually looks like to stretch our limits beyond our wildest imagination?

I am deeply inspired by a fellow swimmer whose was one of the seventeen victims in the Parkland Shooting, Nicholas Dworet. As the nephew of a close family friend, I felt a calling to honor his life and It is through his legacy and example that I stand before you tonight to emphasize ….that the life we all choose with all of the sacrifices we make, should be cherished and never taken for granted.

Nick’s incredible journey illuminates the truths of what lies beneath the surface of a great swimmer who lived his best life. Contrary to what many would of imagine, his life’s journey started when he quit the sport soon after he began high school because he simply lost his love for it.  Without swimming, he witnessed the quality of his life deteriorate. He was struggling, his grades were dropping and most importantly, he wasn’t happy. He then came to the realization that although he may not have been the fastest swimmer, the happiness that he gained from being in the pool and surrounded by his good friends was priceless. He then slowly immersed himself back into the sport and shortly after, acquired a newfound love for swimming and planted the seeds to what blossomed into a beautiful life. He joined TS Aquatics, his beloved swim team led by coach Andre, who according to Nick’s parents, took him under his wing, and mentored him to be not just a great swimmer, but also a great leader. Nick learned that he can achieve any goal he set for himself regardless of the difficulty. He had a whiteboard in his room which housed all of his goal times not just for his upcoming meets but for meets years down the road.  He didn’t care if others doubted him because he knew that he only needed one person to believe in him and that was himself.

More than that, his kindness, caring and compassionate way that he selflessly mentored others, is what teammates loved most about Nick. He was the first person to console you after a bad race, or as you get out of the pool after swimming a best time, he would be the first to congratulate you. As a senior, he was granted captainship of his High School team and enjoyed tremendous success in the sport. However, if you ask Nick about what made him love the sport again, he wouldn’t tell you it was the times or the fact that he could eat whatever he wanted, it was the fact that he was surrounded with the people he loved and that he witnessed everyone living their best lives.

Swimmers are all united in the lives we share, regardless of the team we are on or the state that we live in.We’ve all fallen short and all have experienced the ecstatic feeling of achieving a goal that you once thought was impossible. As this week progresses, I ask that you celebrate Nick’s life in the way I know he’d want:  Swim your heart out, Race with tenacity and show great compassion, respect and kindness to all fellow competitors and teammates. Whether it is shaking the hands of the person in the lane next to you or cheering for a teammate who is seeking a cut. You have no idea how far a simple kind gesture can go towards changing someone’s day.

I ask everyone on the deck and in the stands to take the hand of your neighbor in a moment of silence,  Let’s show Nick’s family, Mitch, Annika, and his younger brother Alex that the YMCA community sends them strength and love and that together we honor their son, Nick Dworet.

We are asking every team to sign a cap and attach it to a banner that will be located in the Athlete’s village all week which will be presented to the family    Thank you.

dang my cap is hidden :/

So proud to be a Wahoo alum. Wonderful devotional Mr. Berger. Thank you.