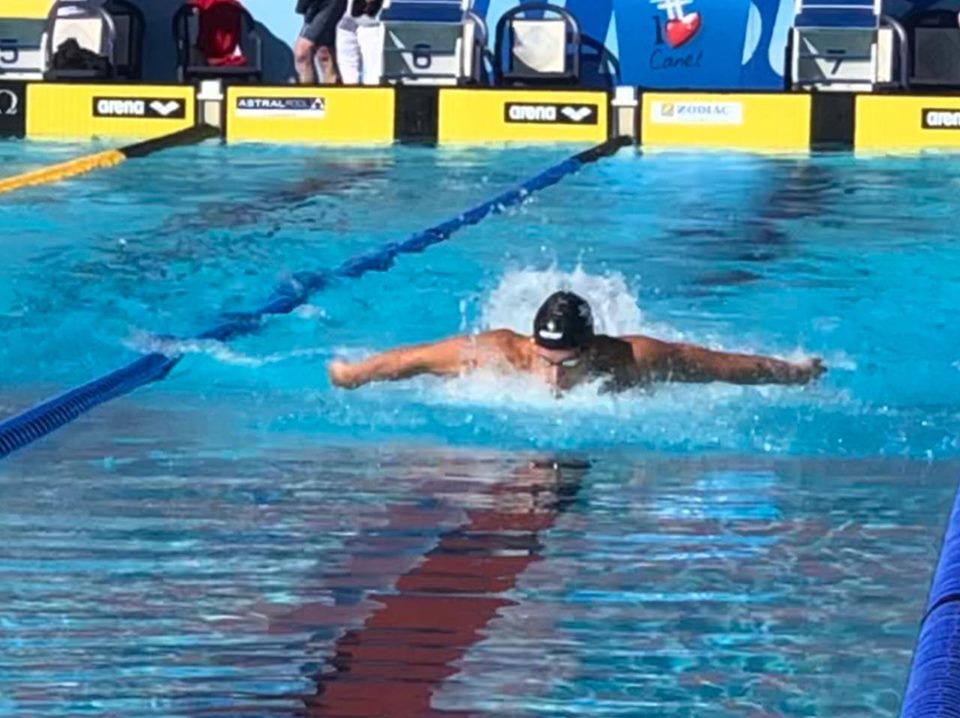 Auburn junior Santiago Grassi posted a 51.88 this weekend to lower his former Argentina national record of 52.02 from last July. Archive photo via CADDA

A trio from Sandpipers of Nevada lived up to their clubs’ lofty expectations by delivering big time drops at the 2022 Western Zone Senior Championships.

The 2019 Richard Quick Invite proved to be a battle between some of the top age groupers in the country and a plethora of elite collegiate and post-collegiate athletes, primarily those affiliated with Auburn University.

One of the more dominant Tiger athletes was rising senior Santiago Grassi, who broke the national record of his native country Argentina in the 100 fly with a 51.88 to dominate the event by over three seconds. The former national mark was also set by Grassi at last year’s Bulldog Grand Slam with a time of 52.04.

Grassi also holds the national record in the 50 fly with the 23.65 he posted at the Canet stop of the Mare Nostrum series less than two weeks ago. He reigned victorious in the event at this meet, finishing slightly off his best with a final time of 24.06. Running marginally behind was former Indian River swimmer Erik Risolvato, who touched the wall at 24.08.

Many other male athletes training with Auburn won multiple events. Former Tennessee Vol Ethan Browne swept all three of the breaststroke events. He first took the 100 breast over current Vol Luke Massey – the two finished in times of 1:02.69 and 1:03.04.

Like Browne, soon-to-be Auburn senior David Crossland swept all three of the backstroke distances. He won the 100 back by a full second, cruising to a 56.50 over his teammate Christian Ginieczki, who stopped the clock at 57.62.

Only one male age grouper managed to win multiple events throughout the entirety of the meet, and that was 15-year-old Tom House of the Dayton Raiders. House handily won the finals of the 400 IM – a final that was solely occupied by age group athletes – in a time of 4:31.69. 16-year-old North Carolina native Jay Baker was the next closest competitor; he came into the wall at 4:34.22.

On the final night, House found another victory in the 200 IM, taking the win by four one-hundredths over his teammate, 17-year-old Nathan Holty. They respectively produced final times of 2:07.81 and 2:07.85.

The girls meet proved to be more diverse in terms of the number of victories going to collegiate or post-collegiate athletes versus age groupers. Baylor Swim Club’s Addison Smith, a Princeton commit, had a dominant showing this weekend. She first won the 200 free with a 2:00.86, and then proceeded to win both the 200 and 400 IMs with times of 2:17.12 and 4:53.44.

Two additional female athletes won three events over the course of the weekend. Luxembourg native Julie Meynen, who will be a senior at Auburn, first won a tight 50 fly over 29-year-old Leah Gingrich, as the two finished with times of 27.66 and 27.74. She then followed that up with wins in both of the sprint freestyles: taking the 50 free in 25.00 ahead of teammate Claire Fisch’s 25.76; and then dominating the 100 free with her 54.49, the closest competitor being Alyssa Tetzloff and her final time of 55.71.

Cecilia Porter, a 17-year-old from Baylor Swim Club, also held down the fort for the age groupers at the meet. She won both the 50 and 100 breaststrokes, cleanly winning the former with a 32.21; and solidly winning the latter in 1:12.00 over Auburn sophomore Val Tarazi‘s 1:13.43.

Coming off her freshman season at Auburn, Emily Hetzer was the final athlete to win multiple events during the course of competition. The distance ace claimed her first win in the 400 free 4:14.88 to out-dual Addison Smith, and then won the 1500 by well over a minute – hitting the pad at 16:45.33.