Sanity Reigns at Cal-Stanford and Other Stories from College Swimming 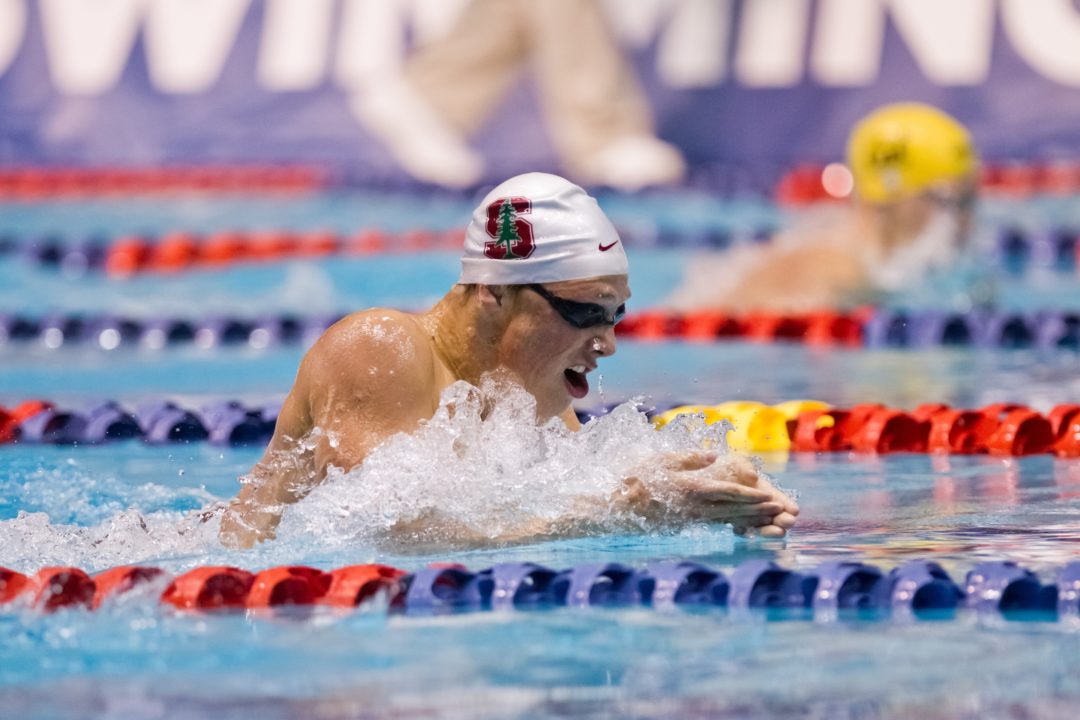 Chris DeSantis tells us why it's better that there were no jaw dropping times at the Cal/Stanford men's meet. (Photo Courtesy © Tim Binning, TheSwimPictures.com)

The annual dual meet between Cal and Stanford, the biggest rivalry meet in college swimming, sneaks up on me every year. Perhaps it’s because of how late it comes in the season, with major conference championships already in full swing. Perhaps it’s also because it usually features jarringly fast swimming. When I say “jarringly”, I mean to indicate that sometimes someone swims so fast at this meet you wonder if they have any more left in the tank.

This year’s meet still snuck up on me. I was muddling through an interminable platform diving break on Saturday night when I remembered the meet. When I looked at the results, I was struck by how remarkably appropriate they seemed. The times were fast, and the defending two time National Champions in Berkeley won. I’m still trying to decide whether that qualifies as an upset (they hadn’t won since 2005). Yet none of the swims were so out of this world that it left me questioning whether either team had sacrificed the end of their season.
The unquestionable star of the meet was Cal’s Tom Shields, who put up two times that will easily qualify for the NCAA Championships, both in the 200 free (1:34.7) and 100 fly (46.0). Both those times also qualify as good “in season” swims for a performer of Shield’s caliber. Stanford swam overall well, taking the medley relay and sophomore David Nolan was outstanding. But many swims on both team seemed tired. Probable NCAA scorers like Drew Cosgarea (4:37 500 free) and Trevor Hoyt (55.4 100 breast) managed 5th and 4th in those events. Based on the results here are two fearless predictions:
1. Cal will win their third straight NCAA title
2. Stanford will not prioritize their PAC-12 streak over the NCAA meet.
Georgia, Florida win bigger, badder SEC
Before I go, one concern on the new look SEC, let’s celebrate its champions. Georgia remains an indomitable force in the women’s meet -and perhaps is approaching the same for their men. Their depth on the women’s side was very impressive and their relays stack up much better for NCAAs next month. Florida broke Auburn’s huge conference winning streak as well, with depth in some events that was completely overwhelming. The meet overall was incredibly exciting and fast. It prompted more “Did you see….” conversations with other coaches on deck than all the other meets going on combined.
With a couple days to clear my head, however, I have to say I’m pretty troubled by the concept of the first super conference and what it means for swimming. Despite whatever assumptions you may make about today’s youth, in my experience most high school kids would rather be depth on a team in a superconference than star for a mid-major. A bigger, more powerful SEC (with the ACC to follow with a junior version in a couple years) will only further consolidate talent in a smaller list of schools. The departure of A&M and Missouri from the Big-12 has crippled the Big-12 conference which still at least maintained a little credibility as a major conference women’s meet. What will the Big East meet be like in two years? Sure I’m excited to watch these super fast conference meets but the implications for college swimming at large are not good.

Right but, if some guy who was 47.8 went 49.1 you would be excited about it but not losing your mind.

Can you repeat that in English?

It is plainly evident based on the past years data that Cal and Stanford rested for their dual meet despite denials. An additional problem is Stanford unquestionably goes all-in for PAC10s in the Skip Kenney years. Let’s see if different this time.

The thing is, looking at the depth of their roster, I don’t think Stanford has a chance to win NCs this year, so why wouldn’t they rest up and at least continue their impressive conference streak?

While people on the farm are justifiably proud of the conference streak, it was a big shock to the system/psyche when a Stanford swimmer failed to make the US Olympic team for the first time since 1952.

The program is far from failing, but change is in order. The quarter system messes with what they can do, but if they can’t get swimmers qualified for NCAAs before Pac-12s, they are always going to have to leave a lot in the pool at Pac-12s.

I think the “rested” state of the swimmers in recent years is just a byproduct of the dual meet being so close to the end of the season. Back when Bottom was coaching at Cal, the times were just ridiculous (eg 19.5 placing third in the 50 when the NCAA record was 19.05).

Judging by how many swimmer both Cal and Stanford have in the Top25, they may find themselves needing to rest for Pac12s in order to get most of the team there!

To NCAA’s that is…

That’s true… both will need to swim fast at PAC 12s. Here’s the guys who I think are already in individually:

Obviously, both teams will be getting guys in on relays, but they still need to get guys in individually. Nolan hasn’t even qualified yet for Stanford.

Someone going 4:37 for the 500 at this time of the year needs more than just rest. But I’m guessing Cosgarea probably got sick that day; he was going 4:19 rested back in November.

They were probably just super beat down from the last few days before they start coming down with the yardage for PAC-12s. Because 37 is hella slow for guys like that, I’ve done that unrested, mid-season and I’m no Danny Thomson and I’m in high school.

Chris, I couldn’t agree more with your remarks on the “super conference” that is the SEC. As a swimmer and a normal high school student, I think that a lot of kids are getting caught up in the idea of going to a name- brand swimming school and sacrificing the potential to be a star on a smaller, or less known team. Additionally, as talent gets more and more consolidated into a few top schools, I fear that more colleges will cut their programs due to a lack of talent and competition…

Very fast swimming at the SECs, but I found it troubling that only one of the five days was on a weekend. Perhaps it’s quaint and old-fashioned, but I think the Ivy basketball model (games only on Friday and Saturday) makes more sense if schools want to pay more than lip service to student-athletes.