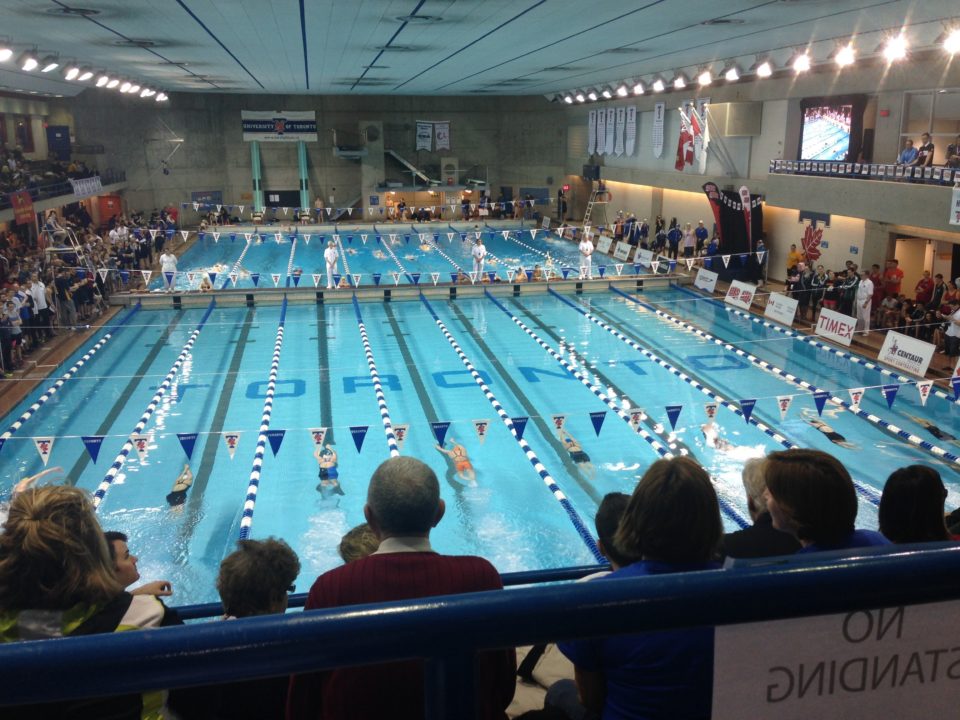 University of Montreal's Sandrine Mainville won the 50 free as one of two CIS Records on Friday. Stock photo via Mitch Bowmile/SwimSwam.com

After winning his 3rd medal on day 7, Josh Liendo has won the most medals of any Canadian man at a single World Championships.

Liendo swam 2 individual races on day 7 of the meet, cracking a Canadian record in the 50 free and collecting bronze in the 100 fly.

Night two of the CIS Championships was full of rivalries, great races, and even some new CIS records. The UBC Thunderbird women are still way out in front, leading by a whopping 262.5 points. The UofT men had a huge day two, overtaking UBC for the current first place rankings.

Marie-Pier Couillard from the University of Laval took the women’s 100m backstroke in 52.66 to win the first event of the night. Her teammate Geneviève Cantin finished behind her in 1:00.07 to give Laval a 1-2 finish. Couillard won the 50m backstroke last night and earned herself a silver in the 100m fly.

The men’s 100m backstroke was all about Calgary’s Russell Wood. Wood who won the 50m back yesterday threw down a 52.66 to beat second place finisher Mitchell Benkic from UBC by over a full second. Wood, who represented Canada at the 2013 World Championships in Barcelona, will be swimming the 200m backstroke tomorrow. Wood should have his hands full with the current top ranked 200m backstroker Matthew Myers from UofT. Myers finished third tonight in the 100.

UofT’s Edward Liu won the men’s 50m fly in a time of 24.04 coming from lane eight. Liu’s outside smoke gave the Varsity Blues a one-two finish in the event after Brian Lee finished second in 24.15. Luke Peddie from UBC took home the bronze in 24.17, just behind Lee.

The women’s 400m freestyle showcased multiple Olympians including 400m freestyle Canadian and CIS record holder Savannah King. Barbara Jardin however took control of the race from the start and never let go, winning the event in 4:06.57. Jardin won the 200m freestyle last night. King ended up finishing second in 4:07.62 just out-touching Calgary’s Lindsay Delmar who earned herself a bronze with a 4:07.72.

Keegan Zanatta stole the show over hometown favourite Zack Chetrat in the 400m freestyle. Zanatta won the event in 3:45.85 coming close to the CIS record which was set way back in 2001. Frank Despond from Toronto was second, Chetrat third.

Tera Van Beilen and Fiona Doyle have created quite a rivalry in the breaststroke events over the year, and this championships has only added to that. Doyle beat Van Beilen yesterday in the 50m breaststroke, but Van Beilen came out on top today with a huge win in the 200. Van Beilen swam a 2:21.18 to take home the gold, beating her rival Doyle by almost three full seconds.

Chris Manning stepped up and grabbed Toronto another gold by winning the 50m freestyle. Manning just out-gunned UBC’s Luke Peddie 21.92 to 21.94. Steven Hibberd rounded out the podium with a 22.23.

The men’s 200m fly final was a total face off between Zack Chetrat from Toronto and Coleman Allen from UBC. Going into the event Chetrat was the four time defending CIS champion in the event. With a 1:55.17 Chetrat earned himself his fifth CIS title in the event, and a huge ovation from the crowd.

The UBC Thunderbirds continued their complete domination of the relay events by taking gold in both the men;s and women’s 800m freestyle relays. The UBC men took down a longstanding record with some pretty impressive names on it to win the event in 7:09.50. The record that they broke was set by Brian Johns, Mark Johnston, Brent Hayden, and Justin Tisdall for UBC in 2003.

The following are the standings after day two:

Looks like the UBC women could almost skip Day 3 and still bring home the title.