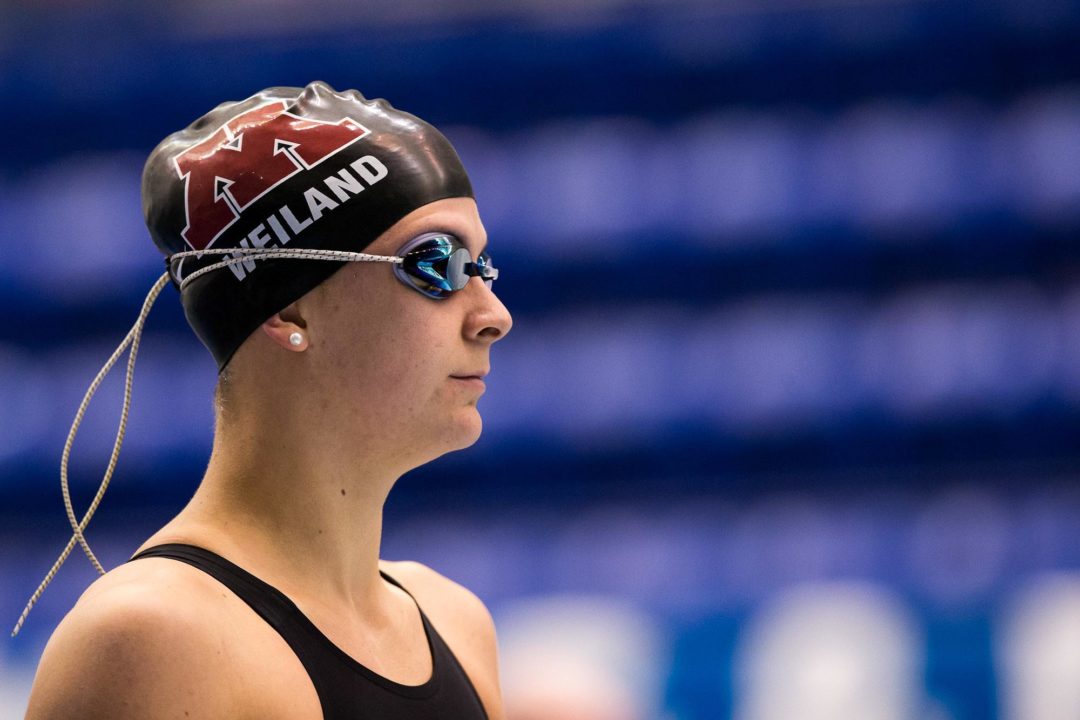 Minnesota's Becca Weiland will look to defend her 100 fly title, but it won't be an easy go for her with Gia Dalesandro and Mckenzie Powers swimming well in prelims. Archive photo via Tim Binning/TheSwimPictures.com

The Minnesota women enter the 3rd day of the 2014 Big Ten Women’s Championships with a 47-point lead, and with 12 individual A-finalists to just 8 for Indiana in the swimming events, the Gophers will be looking to extend that lead headed into the final day of competition. Add to that three divers into the A-final (with not an Indiana diving point to be seen), and the lead could be triple-digits at day’s end.

The race to watch is the women’s 100 fly, where Gia Dalesandro from Indiana, Mackenzie Powers from Penn State, and defending champion Becca Weiland from Minnesota will all battle for the title, and possibly the conference record as well.

Update the page to see new recaps, as we’ll be providing them while the races happen.

Though the team scoring is slipping away from them, the Indiana women are still swimming extremely well on the week, and they put up a great 400 medley relay time of 3:30.30 to break their school, meet, and Big Ten Conference records in the 400 medley relay to begin Friday’s finals session. The old records were all 3:31.26, set by the 2009 Indiana Hoosiers team.

The new record-breakers included Brooklynn Snodgrass (51.66), Bronwyn Pasloski (59.18), Gia Dalesandro (51.43), and Kait Flederbach (48.03). The questions will be answered by the end of the night, but those first three legs are all the top seeds headed into the 100 yard finals of their respective strokes, and Flederbach is a contender for the same honor in the 100 free on Saturday.

The Penn State women have also put together a very good foursome, and they were 2nd in 3:33.27. That included senior Mackenzie Powers on the fly leg in 52.25, and sophomore Alyson Ackman on the backstroke leg in 52.74. Ackman is better known as a middle-distance freestyler, but is also the team’s number-two backstroker behind Powers. Powers is seeded 2nd in both the 100 back and 100 fly later in the session.

The meet leaders Minnesota finished just 3rd in 3:34.00, but got a great middle-section with a 59.60 breaststroke from Kierra Smith and 52.00 fly from Becca Weiland. Fortunately for them, relays don’t cause the same huge point swings that a poor showing in an individual race can at these conference championship meets, so their lead still sits at 39 points after this race, and should grow in the 400 IM.

Michigan’s Courtney Beidler turned a lot of heads last spring when she went a huge personal best in the 400 IM at the Big Ten Championships.

She turned even more this spring by improving another three seconds to go 4:07.42 and win her first career Big Ten title as a senior.

Beidler’s story has been all about improvement. As a freshman in 2011, she was an “also ran” at Big Tens, finishing no higher than 44th in any of her individual events. But now, she’s dropped ten seconds in total in her 400 IM to become a conference champion, and this is an event that she didn’t even take up seriously until Mike Bottom took over the women’s program last season at Michigan. That swim also broke Mattie Kukors’ 2011 Michigan Record in the event.

Beidler’s sophomore teammate Marni Oldershaw took 2nd in the race in 4:08.40. She used a superior breaststroke leg to overtake the defending champion, Indiana’s Dorina Szekeres, who was a 4:08.68 for 3rd. That’s slower than she was when she won last year.

Indiana’s Gia Dalesandro came out of prelims in the 100 fly within a sniff of the Big Ten Record; Minnesota’s Becca Weiland held that Big Ten Record and was the defending champion coming into Friday; but it was Penn State’s Mackenzie Powers who swooped in and took both the title and the record away from them both with a 51.56.

All three swimmers raced the event fairly evenly, with nobody going out or closing all that quickly, but at the end, Powers put it all together for the win. That was the front-half of a Powers double on Friday, that she handled masterfully (more on that later). This is Powers’ second title in this event, as she won the race as a sophomore in 2012.

Wisconsin also picked up 9th-place points thanks to a B-final win from Dana Grindall (52.99).

Alyson “Don’t Call It An Upset” Ackman has won her second-straight Big Ten title in the 200 yard freestyle, this time swimming a 1:44.11 to just miss out on the conference record. The sophomore is now two-for-two in this event in her career at Big Tens.

Ackman was one of just two champions to defend her crown in four opportunities on the day.

In the process of making a name for herself, she beat some really big names. That includes Indiana’s Lindsay Vrooman, who won the 500 free earlier in the meet, and Minnesota’s Kiera Janzen. Vrooman and Janzen were 3rd and 5th in 1:45.29 and 1:45.99, respectively.

Ackman, in fact, ran away with this title in some sense. She beat the runner-up Jessica Plant (1:45.22) of Minnesota by over a second.

After Indiana’s Bronwyn Pasloski was dominant in prelims of the women’s 100 breaststroke, she wound up adding time in the final, while Minnesota’s Kierra Smith dropped a lot of the same, and that left Smith with the win in 59.80. Pasloski, who still ends the day with the best time of the meet, was 2nd in 59.90 in a battle of two Canadians.

Right there with them stroke-for-stroke was an American, Michigan’s Angie Chokran (1:00.22), and a Mexican, Penn State’s Melissa Rodriguez (1:00.25) in 3rd-and-4th respectively.

Aside from Ackman’s 200 free, this was the other individual title that was successfully defended on Friday night, as Indiana’s Brooklynn Snodgrass was the only swimmer under the NCAA Automatic Qualifying time to win the title in 51.65.  That just missed Kate Fesenko’s Championship Record in the event.

As alluded to earlier, Penn State’s Mackenzie Powers topped off her double impressively, taking 2nd in the women’s 100 back with a 52.19.

Michigan’s Zoe Mattingly (52.83) and Ali DeLoof (52.84) took 3rd-and-4th overall. From there-on-out, it was just about the Hoosier show. Justine Ress was 5th in 53.33, Ali Day was 6th in 53.91, and Cynthia Pammett was 8th in 54.31. In between them was Minnesota’s Tess Behrens in 54.00. That race allowed the Hoosiers to take a big chunk out of Minnesota’s lead, but the Gophers still led by 80 points headed into the final event of the day – the 3-meter springboard diving.

And in a twist for the long-storied Indiana diving program, it was actually Minnesota’s divers who rolled through the 3-meter to the tune of 49 points (Indiana didn’t score at all) to earn all of those backstroke points back for the Gophers. The win went to Maggie Keefer for the second-straight year, as she beat the defending NCAA CHampion Casey Matthews from Purdue.

Matthews’ teammate Mary Dunnichay was 3rd on the 3-meter, which is the same position she held on the 1-meter. Purdue’s diving group, this loss notwithstanding, has looked strong this week.

With just one day left, Minnesota has opened up a nearly-insurmountable lead of 129 points (remember, unlike the SEC and ACC, the Big Ten is still only scoring two finals). Indiana will make another push on the 200 backstroke, which is Saturday’s first prelims event, but Minnesota is too good in too many places to give up that big of a lead.

Penn State has given themselves a little cushion over Michigan. On paper, Michigan has maybe a little more depth in the final day’s events, but with both teams swimming well, 42 points might be too much to overcome. The Wolverines do, though, have the edge on diving points (the platform is on Saturday). Michigan needs their sprinters to move up in order to have a chance at 3rd place. Ohio State is not out of that battle yet either, nor is Purdue (who has put a total of 7 placings into diving A-finals so far).