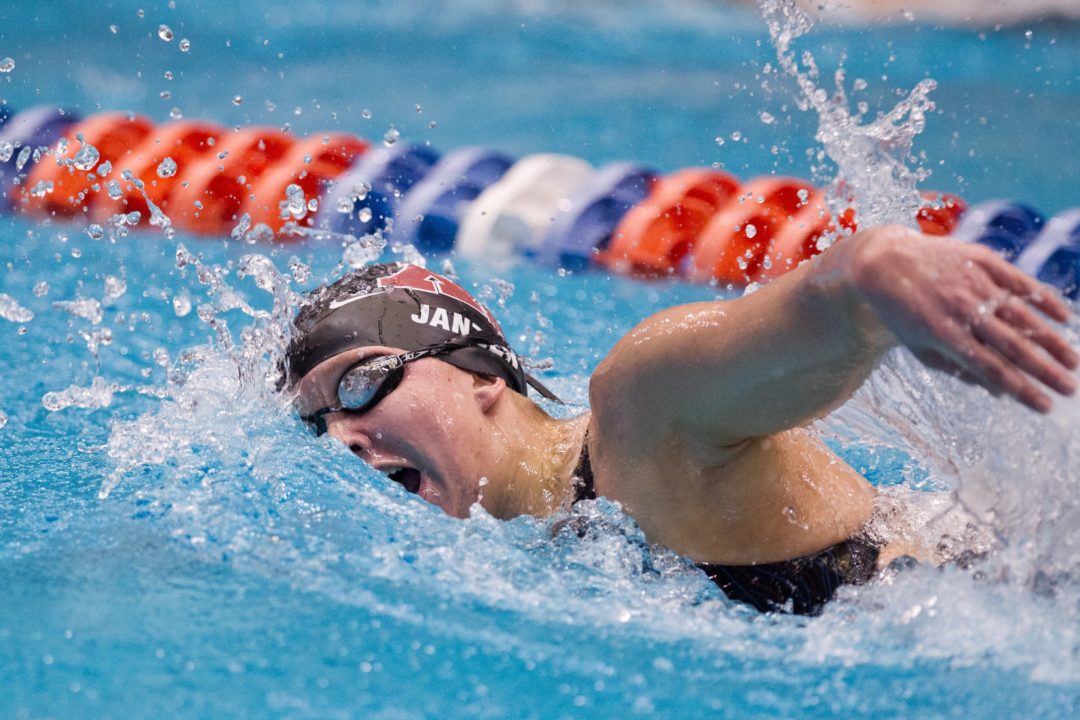 After they split the relays on the opening night, Indiana and Minnesota continued to separate themselves from the rest of the conference this morning, placing a combined 13 swims in the top eight over three events (the rest of the conference combined for 11).  Individually, meanwhile, Ivy Martin stole the show this morning with her Big Ten Conference record of 21.58 in the 50 free.

Minnesota took the top two overall seeds in the 500 free, with Samantha Harding (4:38.05) and Kiera Janzen (4:39.77) both turning in season best times to lock up the middle of the pool tonight.  Janzen was the runner-up here a year ago, nearly catching eventual champion and conference record holder Lindsey Vrooman of Indiana over the final 100 yards.  Vrooman (4:41.16) is the fourth seed heading into tonight, so the two will be right next to each other to face off again.

Alexandra Norris of Ohio State cracked the 4:40 barrier for the first time in her career, finishing third in 4:39.85.

A pair of Nittany Lions and Hoosiers make up the rest of the A-final, with Penn State teammates Katel Sowinski and Alyson Ackman tying for fifth in 4:42.87, and Indiana swimmers Haley Lips (7th, 4:44.31) and Stephanie Marchuk (8th, 4:45.00) rounding out the heat.

Michigan?  Michigan!  The Wolverines took the top two spots in the 200 IM, with Marni Oldershaw and Courtney Beidler turning in lifetime best times this morning.  Oldershaw is the first overall seed, touching in 1:57.23, just in front of Beidler, who finished in 1:57.59.  The Wolverines have continued to improve since the program was combined under Mike Bottom beginning last season, and with one of the nation’s best recruiting classes, the future looks bright in Ann Arbor.

Minnesota and Indiana each put two swimmers up, including the defending champion Tori Simenec of the Golden Gophers (4th, 1:58.16).  Teammate Kierra Smith used the fastest breaststroke split in the field to sneak into the 8th spot in 1:58.98.  Dorin Szekeres (3rd, 1:57.87) and Bronwyn Pasloski (7th, 1:58.75) are the two Hoosier representatives.

Wisconsin’s Ivy Martin continues to be the individual star of this meet through the second session. She swam a 21.58 in the women’s 50 free to take the top seed into finals, mark an NCAA Automatic Qualifying Time, and break her own conference record of 21.84 set last year.

That swim gives her a comfortable top seed, but Minnesota has heavily populated the A-final, including 2nd seed Becca Weiland in 22.21, the 5th seed Erin Caflisch in 22.53, and the 6th seed Blake Zeiger in 22.58.
They’ve got three finalists, and the other team with multiple A-finalists is Wisconsin, with freshman Chase Kinney breaking 23 for the first time of her college career. Her 22.44 is only about a tenth faster than she was at the Ohio high school state championship meet during her senior year, so the time isn’t as much of a surprise as the lofty seed).
Indiana’s senior-transfer Kait Flederbach is the 4th seed in 22.50, and in the outside lanes will be Penn State’s Carolyn Fittin (22.59) and Ohio State’s Michelle Williams (22.64).
Total Up/Downs:
Minnesota – 7 up/4 down
Indiana – 6 up/2 down
Michigan – 2 up/2 down
Ohio State – 3 up/3 down
Penn St – 4 up/3 down
Wisconsin – 2 up/2 down
Purdue – 0 up/4 down
Nebraska – 0 up/1 down
Iowa – 0 up/2 down
Northwestern – 0 up/1 down