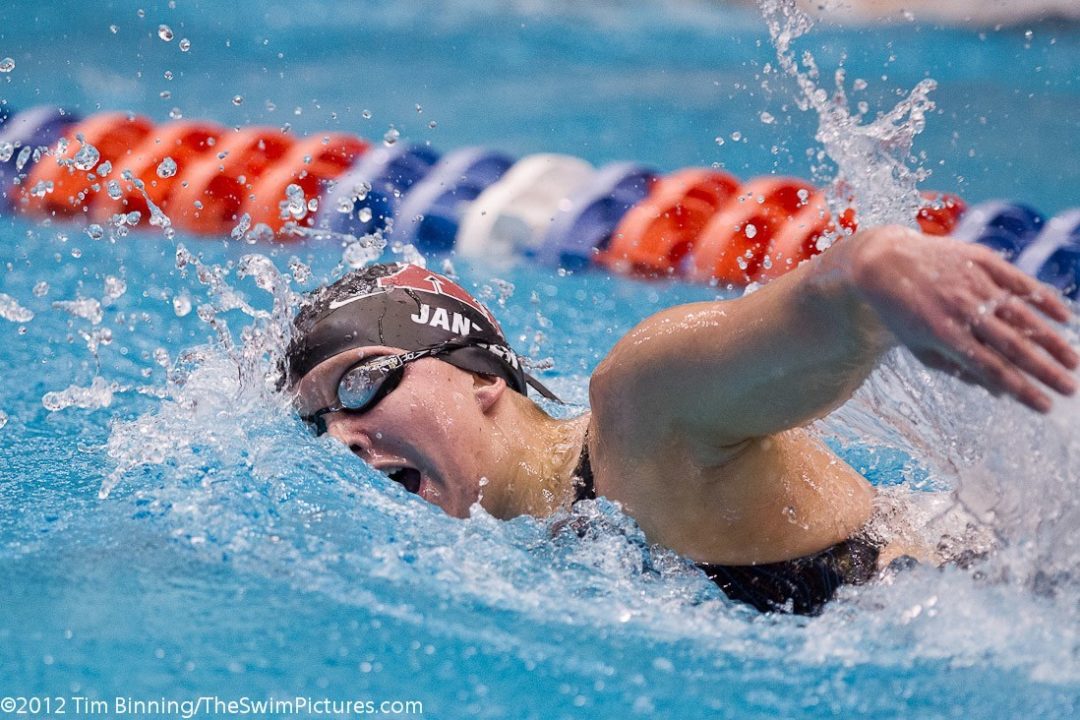 The Golden Gophers won the conference at home on a big final night that saw conference records from Wisconsin's Ivy Martin and Indiana's Gia Dalesandro. Archive photo via Tim Binning/TheSwimPictures.com

Minnesota will look to close off a three-peat in front of a home crowd, heading into the final night of competition with a substantial lead. Golden Gopher breaststroker Kierra Smith looks to go double-gold by winning the 200 breast after a thrilling come-from-behind win in the 100 last night. Indiana isn’t giving up yet, though, loading up the 100 back field with 5 A-finalists including defending champ Brooklyn Snodgrass.

Wisconsin’s Ivy Martin and Penn State’s Alyson Ackman look primed for a 100 free showdown after Martin won the 50 Thursday and Ackman the 200 Friday.

The night kicks off with the 1650 freestyles. Also run will be the 200 fly, platform diving and 400 free relay.

The mile might’ve had a deja vu type feeling for spectators, as it was essentially a lengthier rerun of Thursday night’s 500 at the top. Minnesota’s Sam Harding went out fast, leading through the 600, but then Indiana’s Lindsey Vrooman started to gain some traction, making up the deficit gradually. She led by .01 at the 700-mark and never looked back, slowly building a 3-second lead that ended with a 15:55.20 win. Harding stayed tough, keeping her splits consistent to take second in 15:58.12.

The top swimmer out of the morning heats, Minnesota freshman Breanne Siwicki, wound up as the 3rd-place after going 16:11.32. Northwestern freshman Lauren Abruzzo came in fourth in 16:15.29, just beating out Penn State’s Megan Silverling by .6.

What looked like a big event for Indiana turned into a huge one as the Hoosiers went 1-2-3-4 at the top of the 200 backstroke. Defending champ Brooklyn Snodgrass was the easy winner, going 1:51.43. She had the race wrapped up by the 100 mark, and with that kind of time, should be a real factor to put up big points come NCAAs.

Another sprint race, another Big Ten record for Ivy Martin. The Wisconsin junior has pretty much been the undisputed sprint queen of the conference this season, and added the 100 free championship to her collection on the final night. Her 47.78 broke the conference record of 48.05 she set this morning, and her 22.5 opening split put her an astounding eight tenths up on the nearest competitor.

Penn State’s Alyson Ackman took second in 48.34. She closed well but didn’t have the early speed to hang with Martin. She did top Indiana’s Kaitlyn Flederbach by two tenths to round out the first crew of swimmers to hit the wall.

The rest of the A final was very bunched up. Ohio State senior Michelle Williams went 49.06, just ahead of Minnesota junior Becca Weiland. Weiland’s teammate Erin Caflisch moved up from the 8th seed to take 6th, and Michigan’s Zoe Mattingly and Wisconsin’s Chase Mattingly closed out the field with a tight race for 7th won by Mattingly.

She won the 100 last night in a tight battle, but tonight Minnesota’s Kierra Smith got to run away with one, winning the 200 breast in dominating fashion. The sophomore went 2:06.66, winning by three seconds over the field and rattling her former teammate and NCAA champion Haley Spencer‘s conference record of 2:05.98.

Smith was still two tenths off her mid-season best time, suggesting that she’s got more in the tank for NCAAs. A 2:05 from Smith could make for a mighty entertaining 200 breaststroke the NCAA championships next month, especially after Texas A&M’s Breeja Larson went 2:05 earlier tonight and Notre Dame’s Emma Reaney went 2:04 to break Larson’s American and NCAA record.

Indiana freshman Gia Dalesandro announced her first-ever Big Ten championship in a big way, breaking the conference record set by former Indiana star Kate Fesenko back in 2010. Dalesandro was 1:53.95 to run away with the conference title. She beat Penn State’s Kathryn Rowe, who swam a tough double with the 200 back and went 1:56.80 for second.

Even with that tough event combo, Rowe touched out Brenna Maclean by .04 to prevent an Indiana 1-2. Minnesota’s Devin Ste Marie came in fourth, just a tenth back of those two.

Minnesota’s Maggie Keefer won on 3-meter last night, but tonight it was her teammate Sarah McCrady who claimed the Big Ten title, scoring 329.50 on the Platform event to beat Indiana’s Kate Hillman by 7 points for the conference championship.

Michigan’s Carey Chen finished sixth, just before Minnesota’s third entrant, Jessica Ramberg. Like last night, the divers were a huge point swing for the Golden Gophers – in addition to McCrady, Keefer and Ramberg, Minnesota went 1-2 in the B final with Katy Etterman and Lexi Tenenbaum grabbing 9th and 10th overall.

Once again, Ivy Martin‘s sprint dominance was too much to overcome as her 47.4 split led the Wisconsin Badgers to the final event title of the night. Wisconsin went 3:15.65 to top Minnesota by .6 – Rebecka Palm was a solid 48.9 on the anchor leg, holding off three charging anchors from Minnesota, Penn State and Indiana.

The Gophers went 3:16.24, the first of that trio of teams to finish. Becca Weiland fought valiantly swimming the leg against Martin and putting up the field’s third-best split at 48.6. Penn State was only a tenth back of Minnesota, with Gophers anchor Blake Zeiger (49.0) running down the Nittany Lions for the runner-up spot.

With that, Minnesota clinched it’s third-straight Big Ten title, beating Indiana by 111. Both the Gophers and Hoosiers should be in line to make some waves at NCAAs as well, considering many of their top swimmers (Kiera Janzen and Kierra Smith for Minny, Brooklyn Snodgrass and Lindsay Vrooman for Indy) didn’t appear to be fully rested for the conference meet. On top of that, the national championships will be back in this very same Minnesota pool, so no Big Ten teams should be caught off-guard by an unfamiliar facility.

Penn State was a clear-cut third, but the battle below them got interesting. Ohio State topped their big rivals Michigan by just 13 points for fourth, with Wisconsin and Purdue just on the outside looking in.