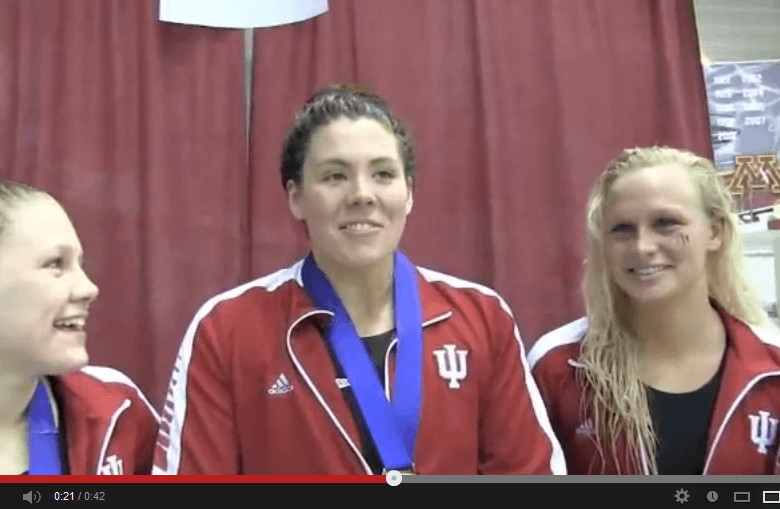 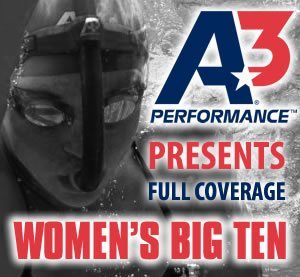 The final morning of swimming at the Big Ten Women’s Championships saw a big run by Indiana, which sits second in team points. They doubled Minnesota’s number of A-finalists 10 to 5, although those numbers don’t include the 1650 or diving, both of which should be solid events for the Gophers. All-in-all, it’s still a significant gap between Minnesota and Indiana at the top, although the Hoosiers should have enough firepower tonight to keep things interesting.

No surprise here: Brooklyn Snodgrass is the clear favorite and top seed, going 1:52.49 this morning. If the Hoosiers are going to make a run at Minnesota in the team points, the brunt of the work is going to have to be done here, as IU placed 5 in the A final, with all 5 in the top 6 spots. Junior Cynthia Pammett is second for the Hoosiers in 1:54.67.

Penn State sophomore Kathryn Rowe broke up the IU run at the top, going 1:55.16 for the 3-seed. Behind her are Alexandria Day, Dorina Szekeres and Justine Ress, all Hoosiers.

Whatever momentum Indiana gains in the backstroke will be somewhat offset by the 100 free, though, where Minnesota will score 5 total women to IU’s 1. The top seed, of course, is Wisconsin’s Ivy Martin, who broke the Big Ten record with a very-fast 48.05 this morning. Not far behind her is 200 free winner Alyson Ackman of Penn State, who went 48.25, and should give Martin a solid run in tonight’s final.

Indiana’s Kaitlyn Flederbach sits third with a 48.86, and Ohio State’s Michelle Williams also got under 49 this morning.

After coming from behind over the final 25 to win the 100 last night, Minnesota’s Kierra Smith grabbed the top seed in her signature 200 this morning with a 2:09.47. Expect this race to get faster tonight – Smith was still 3 seconds off her outstanding mid-season time of 2:06.43, and Indiana’s Bronwyn Pasloski was a bit off her best, too, going 2:11.14 for third.

Between those two is Penn State’s Melissa Rodriguez, who went 2:10.19 for the second slot going into tonight. Her Nittany Lions are sitting third overall, and not completely out of the hunt for second, although it would take some big efforts from their high seeds like Rodriguez to make a late run at Indiana.

This conference is surprisingly well-dispersed in terms of top breaststroke talent. In a unique twist, the 200 breast will represent all 12 Big Ten teams in the point-scoring heats, including the top 6 in team points all represented in the championship final.

Indiana and Penn State are dueling atop the 200 fly, combining to take the top 4 spots. Gia Dalesandro, the fantastic freshman from IU, is the top seed in 1:55.29. Behind her is Nittany Lion freshman Katelyn Sowinski. Her teammate and sophomore Kathryn Rowe is third before yet another freshman, Indiana’s Olivia Barker.

Minnesota’s Devin Ste Marie, runner-up in this event a year ago, is the 5th seed with a 1:57.26. Behind her, Purdue’s Rhiannon Sheets, Indiana’s Brenna Maclean and Wisconsin’s Dana Grindall were all 1:58s to close out the heat.

Indiana put together the best morning of the bunch with 10 A finalists. That should keep them from having to worry much about a hot Penn State team behind them, but still probably won’t be enough to catch Minnesota. The 1650 will also be added to these numbers, which should inflate Minnesota’s and Indiana’s point-scoring opportunities greatly – those two teams combined for the top 5 spots in the mile last season, and four of the five return.

The platform diving event will also take place this afternoon and tonight. Minnesota placed three divers in the top 8 last night, a big boost to their now-129 point lead. In addition, the 400 free relay is added to the end of the schedule tonight.