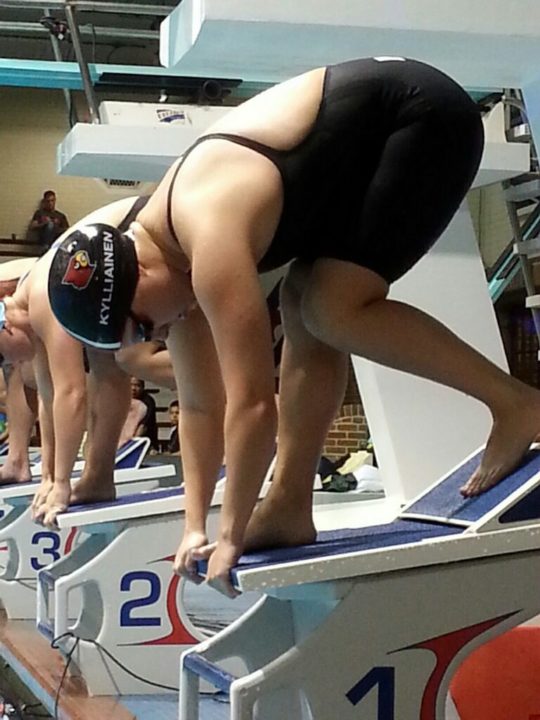 Louisville stayed hot on the final day of prelims at the AAC Championships, breaking more pool records and taking top seeds in 7 of the 8 events. Tanja Kylliainen is the top 200 flyer, looking for her third conference title of the meet. Archive photo via Gisselle Kohoyda

Louisville stayed hot on the final day of prelims at the AAC Championships, breaking more pool records and taking top seeds in 7 of the 8 events. Tanja Kylliainen is the top 200 flyer, looking for her third conference title of the meet.

Winner of the 100 back last night, Rutgers’ Joanna Wu is back on top this morning, going 1:55.07 to break the pool record and score the top seed for the final tonight. Sitting 2 seconds ahead of the field, Wu is definitely the favorite tonight.

Louisville and SMU loaded up the A final, qualifying in 5 of the top 7 spots. Louisville’s Erica Belcher sits second in 1:57.15, just up on SMU’s Isabella Arcila, the fastest backstroker from the medley relays last night. Another Cardinal, Kristina Steins, is fourth before Connecticut freshman Christine Pedersen broke up the Cardinal-Mustang party. SMU’s Ursa Bezan and Kenzie Buss of Louisville came in next, and Cincinnati’s Jessica Piper rounded out the A field.

Nolan Tesone has been on fire for Louisville the weekend, especially in the prelims. The sophomore grabbed his third top-seed of the weekend, going 1:42.95 for a new pool record. He won the 200 IM Thursday, but fell to second in the 400 IM last night.

Also under the old pool record was freshman Aaron Greene, and yet another Louisville freshman, Gregory Tarasevich, was just off the mark, going 1:43.98 (the pool record stood at 1:43.93).

Juan Lopez rounded out the 1-2-3-4 punch for Louisville – they’ll try to make this their third top-4 sweep of the meet tonight.

SMU’s Matas Andriekus sits fifth in 1:46.79, a second and a half behind Lopez, and Cincinnati’s Donovan Kearns is sixth. The final two championship final spots went to UConn swimmers Jeff Magin and 400 IM champ Sawyer Franz.

The ong0ing mystery of Kelsi Worrell‘s entries was finally resolved today, with the Louisville sophomore entering the 100 free and taking the top seed. Her 48.86 broke the pool record and is first by .7 over SMU’s Nina Rangelova. Rangelova has been in tight battles for two different conference championships already this week, but has yet to win one. She pushed Cincinnati’s Jackie Keire in both the 200 and 500 frees, taking second in both.

Keire sits fourth in this event, just behind UConn’s Chinyere Pigot, who beat Worrell for the 50 free title. Also in the race is 100 fly winner Marne Erasmus of SMU, setting up what should be an outstanding final tonight.

Two more Cardinals got into the A main, Krissie Brandenburg and Breann McDowell. Cincinnati’s Weronika Wasiakowska and SMU’s Nathalie Lindborg will swim off for 8th in a showdown that hasn’t yet appeared in the live results.

Louisville’s Carlyle Blondell claimed the 100 free’s number-1 seed, one of four Cardinals in the final. His 43.06 is a new pool record, and topped freshman teammate Matthias Lindenbauer by eight tenths.

Ryan Koops is third for SMU, followed by his teammate Ziga Cerkovnik – both men were 44.3 to get in ahead of Louisville’s Joao de Lucca. De Lucca seemed to really take his foot off the gas over the back half of the race: his 20.58 opening split was fastest of the field, but he coasted from there into the fifth seed, just like he did yesterday morning in the 200 before rocketing to the win at night.

Louisville freshman Trevor Carroll was next, and SMU grabbed the final two spots in an all-Louisville and SMU field for tonight.

Andee Cottrell now owns a share of both the breaststroking pool records in her home Louisville facility. The freshman went 2:11.12 to tie the old recrd set by Notre Dame’s Emma Reaney earlier this year. She’s the narrow 1-seed, just ahead of SMU’s Rachel Nicol and Louisville teammate Gisselle Kohoyda.

SMU’s freshman Tara-Lynn Nicholas is fourth with a 2:12.39, also not too far out of the hunt. From there, Cincinnati’s Helena Pikhartova and a pair of Rutgers Scarlet Knights (Greta Leberfinger and Allyson Perrotti) bridge the gap to the third Louisville finalist, sophomore Lucy Kramer.

The Louisville breaststroking trio that ran away with the 100 last night will have a challenge in the longer distance. Though Kameron Chastain is the easy top seed in 1:56.93, the other two Cardinals are in the thick of a dogfight with UConn’s Lachez Shumkov. 100 breast champ Thomas Dahlia is 1:58.39 for second and Addison Bray is 1:58.87 for fourth, with Shumkov sandwiched between at 1:58.65.

It’s worth remembering that Dahlia blew up at finals last night to win the 100, so its not out of the question that he could make a big drop to challenge Chastain tonight.

SMU took three of the remaining four A final spots, with senior Nicolai Hansen leading the way in 2:01.01. UConn’s Greg Baliko is right behind in 2:01.20.

Tanja Kylliainen goes for her third conference title in the 200 fly tonight. She broke yet another pool record (she already did the same in the 200 and 400 IMs), going 1:56.09 for the top seed. The junior is still well off her best, so expect that record to fall again tonight.

Kylliainen’s teammate Devon Bibault sits second in 1:57.56, and the two are well separated from the rest of the field.

Rutgers grabbed the next two spots with Morgan Pfaff (1:59.03) and Brittany Guinee (2:00.17), while UConn’s Sophie Nothnagle and Caroline Finkle combined for the next two. Houston’s Laykin Lowry gives the Cougars their first A finalist of the day before UConn’s Holly Gallagher rounds out the top 8.

Another men’s event, another 1-2 seeding for the home Cardinals. Freshman Josh Quallen leads this one in 1:45.44 with his senior teammate Juan Lopez second in 1:47.17. Quallen is just .2 off the pool record, so expect him to gun for that hard tonight after his splits really tailed off late in the race with little competition this morning.

SMU’s Tyler Rauth is third in 1:47.97. UConn freshman Christopher Girg continued his nice championships by taking fourth, breaking up an SMU duo, with Tucker Wells just .04 back from him.

Louisville’s David Boland, Cincinnati’s Hunter Pasek and UConn’s Ryan Walsh are the rest of the A finalists in an event where only 10 men will score tonight – the rest of the field exhibitioned and 100 fly champ Pedro Coutinho was disqualified in the prelims.

Louisville already had the meet pretty well in hand on both sides, but today’s prelims should seal that deal. The Cardinals continue to load up the A finals, while SMU still looks to be in good shape in battling off the Rutgers women and UConn men for second place.

Added to these numbers will also be the 1650s, which run this afternoon with the final heat tonight, platform diving and the 400 free relay.

Talking about down play…De Lucca went 41.95 in final.That is a Personal Best for him.