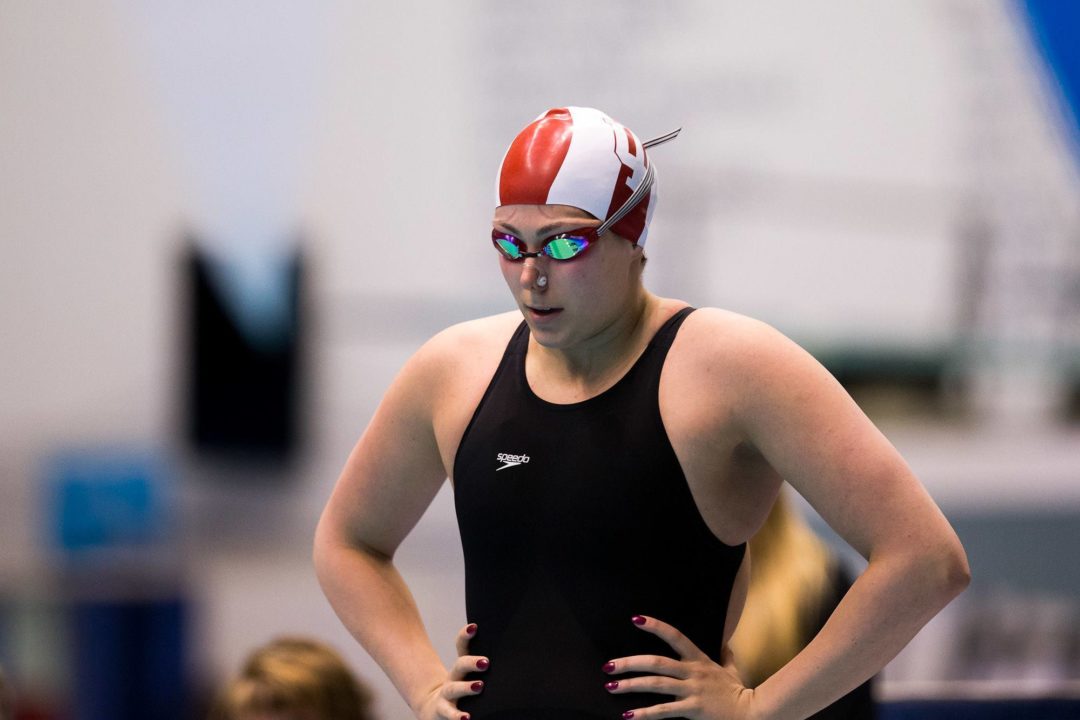 Indiana needs a second-straight big performance from their backstrokers, led by Brooklynn Snodgrass, to keep pace with Minnesota on Friday. Archive photo via Tim Binning/TheSwimPictures.com

The Women’s Big Ten Championships shape up to be yet another dogfight between Indiana and Minnesota, who have combined for the conference’s last 5 championships.

Coming into Friday’s prelims session, Minnesota has a 47-point lead over Indiana, but both teams are swimming extremely well.

Minnesota had a big morning, and even though Indiana’s strongest event (the 100 back) comes on Friday night, the Gophers should extend their lead by day’s end.

The top 5 from last year’s meet in this event are all back in this A-final again in 2014, including Penn State’s Gabi Shishkoff (3rd seed – 4:11.04), Michigan’s Courtney Beidler (4:12.33 – 5th seed), and Minnesota’s Samantha Harding (6th seed – 4:13.56). Harding was the runner-up in this race last year, when she dropped huge from prelims to finals. Given how well she swam in the 500 free, expect her to contend for another top two finish in finals.

Minnesota got a spectacular performance, from a team perspective, to get three swimmers into this A-final. Freshman Breanne Siwicki is the 4th seed in 4:12.30, and Hailey Szews is the 7th seed in 4:13.65. Purdue’s Nina-Karlina Petric is the 8th seed in 4:14.58.

Running, Cumulative session Up/Downs. “Ups” are A-finals, “Downs” are B-finals. Listed in order of standings at the end of Thursday’s finals.

Indiana’s Gia Dalesandro continued her impressive run as a freshman by taking the top seed in the women’s 100 fly on Friday morning with a 51.76. That crushes the Indiana Record (previously held at 52.44 by the great Kate Fesenko), and was just .15 seconds away from the Big Ten Record set by Minnesota’s Becca Weiland.

Weiland, last year’s champion in this race, will be right next to Dalesandro to defend her title thanks to a 52.24 for the 2-seed. Penn State’s Mackenzie Powers will be on Dalesandro’s other side, with a 51.90 in the morning.

Wisconsin’s Ivy Martin swam a 52.80 for the 4th seed, showing just how much she’s developed as a “swimmer” as compared to just a “50 freestyler” this year. That’s two seconds better than she was coming into this season, and last year she swam in the C-Final of this race.

Minnesota put three into this final: Tori Simenec sits 5th with a 52.92, and Devin Ste-Marie is tied with Penn State’s Kathryn Rowe in 53.24 for the 7th seed. Also finaling is Wisconsin’s Rebecka Palm in 52.99.

Running, Cumulative Up/Downs for the session.

Penn State’s Alyson Ackman snuck down from Canada last year and surprised a lot of people when she won the Big Ten title. This year, she’s got the pressure of the title, and so far she’s handled it well with a 1:44.81 in the 200 yard free for the top seed. She closed in a split of 26.53, which is almost a full second faster than the second-seed Jessica Plant of Minnesota was to win her heat in 1:45.67.

Indiana’s Lindsay Vrooman, if she puts herself in the position early, will have the endurance to go with Ackman coming home. She’s the 3rd seed in 1:45.73, and Minnesota’s Kiera Janzen is 4th in 1:45.94.

Purdue scored their second A-finalist of the session, with junior Rhi Sheets swimming a 1:46.03 for the 5th seed; Lauren Votava made it three Gophers in the A-final (her teammate Maddie Hoch would make it four as the 8th seed), and Alex Norris raced to her second top-8 prelims finish of the meet with a 1:46.39 as the 7th seed.

Running up/downs for the session:

Indiana’s Bronwyn Pasloski led the way into prelims as the only swimmer under a minute in the 100 breaststroke prelims.  She swam a 59.53, which is her lifetime best and the third-fastest swim in Indiana breaststroke history.

Iowa got their first scoring-finalist of the meet with freshman Emma Sougstad tying for 5th with Ohio State’s Ashley Vance in 1:00.90. Sougstad is one of three Hawkeyes who will swim in the A-or-B finals of this race for points tonight.

Running up/downs for the session:

That includes sophomore Brooklynn Snodgrass, who is looking to defend her title with a 51.95 (faster than she was to win the Big Ten last season). Also into the A-final was Allie Day (53.36 – 5th seed), plus Justine Ress and Cynthia Pammett (53.84 – tied for 7th). If any of those other three can sneak up into the top half of the A final, it will have a huge impact on Indiana’s chances at this meet.

Zoe Mattingly pulled the tough 100 fly/100 back double, and was better in this 100 back with a 53.33 for the 4th seed. If she does qualify for NCAA’s, look for Michigan to break up that double.

Illinois junior Alison Meng was 9th in prelims in 53.94. That crushed her own school record of 55.11, and is lined up to be their first individual scorer of the meet.