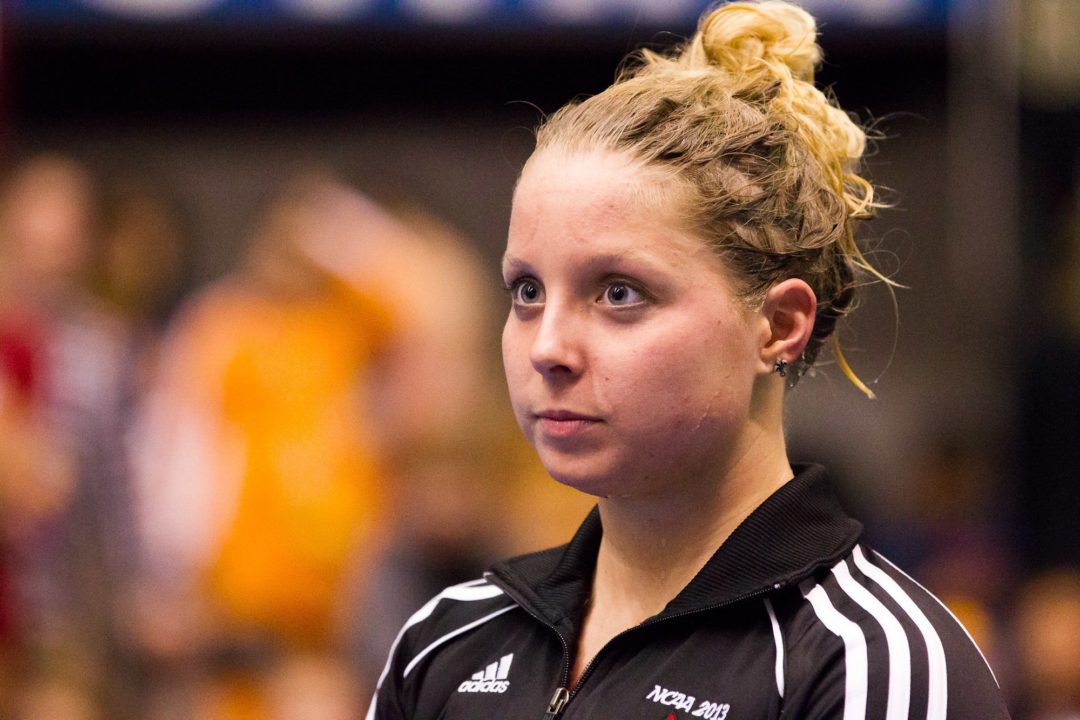 Prelims of day 3 at the first-ever American Athletic Conference championships saw Louisville continue to press its advantage in both genders, qualifying enough A and B finalists for tonight to potentially put the meet out of reach before the final day even begins.

Cardinal junior Tanja Kylliainen continued her tear through the weekend, downing another pool record with a 4:06.34. Perhaps “downing” isn’t the right word; it’s not quite strong enough to capture the fact that Kylliainen hacked 8 full seconds off the mark. She’s just nine-tenths off an A cut as well.

Morgan Pfaff of Rutgers is second with a 4:15, and Louisville’s Abby Chin is just behind, closing out the second tier of swimmers this morning. Louisville put 3 swimmers up (Carly Munchel joined Chin and Kylliainen), while SMU and Rutgers each had two.

In the men’s event, 200 IM champ/pool record-breaker Nolan Tesone added another top seed for Louisville, going 3:47.59 to lead the field by 8 seconds. He went slightly faster at finals in the 200 IM last night, and if he can do that again, he may have a shot at the pool record of 3:46.03.

Jake Schultz is second, also for Louisville, in 3:55.85. Three more men got under four minutes this morning: Cody Green and Joey Ferreri of Cincinnati and Michael Lennon of UConn.

Marne Erasmus, who just joined SMU officially a few months ago, is already having a big impact on these championships. She grabbed the top seed in the 100 fly with a 52.05, beating Louisville’s star flyer Kelsi Worrell by four tenths. The two should be primed for a big showdown tonight, although it’s hard to tell how rested either is – Worrell seemed a bit off her pace in the 50 free last night.

Louisville’s Devon Bibault is the third seed back at 54.04. Rutgers’ Brittany Guinee and Mary Moser follwed her into the A final.

The Cardinal men grabbed the top 4 finals spots in the 100 fly, an event that looks like Cardinal domination tonight. Junior Aaron Young led the way in 46.62, a new pool record. Also under the old pool mark was Pedro Coutinho, who went 46.89. A pair of freshmen, Josh Quallen and David Boland were the only others in the field under 48 seconds.

Of the remaining four A final spots, 3 went to SMU, with freshman Tucker Wells sitting fifth in 48.16. Louisville took 8th for their fifth overall A finalist in the event.

Last night’s 500 free winner Jackie Keire is the top seed in the women’s 200 free. She went 1:46.57 to once again top Nina Rangelova of SMU. Both women went way faster at prelims last night, so keep your eyes peeled for another great race with some potential fast times tonihgt.

A Louisville Cardinal leads the men’s 200 free, but it’s not Joao de Lucca. Freshman Trevor Carroll went 1:35.91 this morning to nab an inside lane for tonight. His teammate Matthias Lindenbauer went 1:36.42 for second and de Lucca easily cruised a 1:37.20. He’s probably not fully rested, but is also still the clear favorite tonight after splitting 1:32 on the 800 free relay on opening night.

SMU’s Matt Roney is the first non-Cardinal qualifier, sitting fourth, and UConn qualified three men for the A heat, with Cincinnati taking the last slot.

Louisville’s Andee Cottrell became the first AAC swimmer to break a minute in the 100 breast, going 59.35. That’s a new pool record for the freshman, and should set her up well for NCAAs, especially if she can drop any more time tonight. SMU’s Rachel Nicol is next with a 1:00.52 that should get faster tonight, and her teammate Tara-Lynn Nicholas is third ahead of Louisville’s Gisselle Kohoyda.

On the men’s side, a three-way battle between Louisville teammates is set up: Kameron Chastain holds the top seed at 53.20, but Thomas Dahlia is right behind in 53.33. Making things even more interesting, Addison Bray is 53.50 and still well within the hunt.

Those three are pretty well checked out from the field – SMU’s Nicolai Hansen is fourth with a 54.31 and UConn’s Lachezar Shumkov is the only other swimmer under 55, sitting fifth in 54.90.

Rutgers has a shot at an individual swimming title in the 100 back, where top threat Joanna Wu holds the top seed with a 53.19. She’ll have to fight off Louisville’s Erica Belcher (second in 53.79) as well as SMU’s Isabella Arcila (third in 54.01) to get the job done, though.

Continuing their domination of the prelims, Louisville placed four women in the A final of the backstroke for tonight. After Belcher are freshmen Kristina Steins and Kenzie Buss as well as senior Krissie Brandenburg.

Aaron Young took his second top seed of the morning, coming back off the 100 fly to go 47.08 in the 100 back. He leads a trio of Cards at the top, with freshmen Grigory Tarasevich and Aaron Greene going 2 and 3. SMU’s Matas Andriekus is fourth with a 48.51 and UConn’s Jeff Magin is not far behind in 48.88.

Louisville also got sprinter Carlyle Blondell into the championship heat. SMU’s Ryan Koops and Cincinnati’s Joe Scherpenberg round out the A heat of the final event of the morning.

Louisville set themselves up extremely well, qualifying 16 A finalists on the women’s side and 18 on the men’s. Those kind of numbers mean the Cardinals could just about seal the meet title by the end of tonight, barring any drastic Saturday happenings.

SMU is probably in the next-best shape on both sides, although the Rutgers women also had a very strong morning. The Cincinnati men loaded up the B finals tonight with 15 swims. The Bearcats also have 7 A finalists on what should be a big night for them.

Note: The men’s meet saw multiple events where the swimmers didn’t fill the B final. That’s why the “down” numbers don’t completely add up on the men’s side.