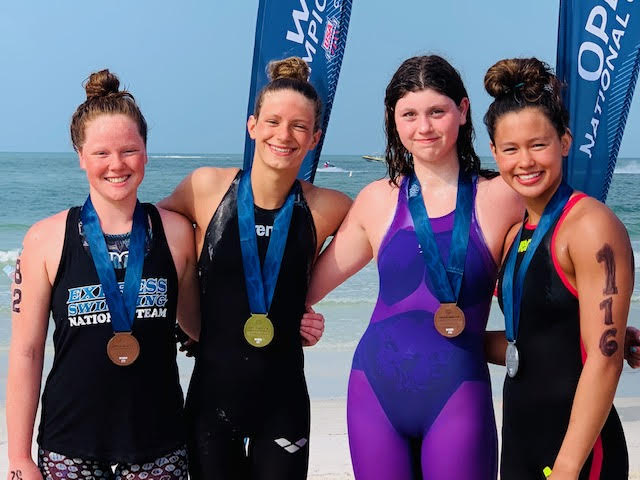 Grimes will have the opportunity to move herself up in the rankings even further tomorrow night. Stock photo via Carl Fierro

15-year-old Katie Grimes, a Sandpipers of Nevada product, exploded in the heats of the women’s 1500 free this morning, obliterating her previous best time by 13 seconds. Grimes swam a 16:07.44, taking 6th this morning to earn a spot in tomorrow night’s final.

The swim vaulted Grimes up to #5 all-time in the 15-16 girls rankings at just 15 years old. Keeping in mind both that Grimes will have another opportunity tomorrow night, and that she’s only 15 years old, here is the new all-time top 5 for 15-16 girls:

There are a few notable things about this list. Firstly, Grimes will be racing two of the other swimmers in this all-time top 5, Katie Ledecky and Erica Sullivan, at tomorrow night’s final. Sullivan is a Sandpipers of Nevada teammate. The other interesting note is that both Janet Evans and Kim Linehan are holding strong in their #2 and #3 spots in the rankings, despite the fact that Evans swim is from 1988, and Linehan’s from 1979. It should also be noted that Linehan’s, Evans’, and Ledecky’s swims from this list were all World Records at the time they were swum. Ledecky still holds the World Record, of course, at 15:20.48.

Grimes will have the opportunity to move herself up in the rankings even further tomorrow night, and, more importantly, she’ll have a shot at becoming the youngest swimmer to make the Olympic team this cycle. She’s going up against stiff competition, including teammate Erica Sullivan, who posted a speedy 15:56.24 this morning, and coincidentally is directly ahead of Grimes on the 15-16 all-time standings. However, Grimes did what she had to do this morning, and that was to earn herself a lane in the final.

Another interesting aspect of the women’s 1500 final tomorrow that we don’t necessarily see all the time is that 4 of the 8 swimmers are some of the top open water swimmers currently for the U.S. This includes Grimes, who had an excellent showing at the Open Water Nationals meet in April of this year. Erica Sullivan won a national title in the 10k back in April, and both Ashley Twichell and Haley Anderson have already earned roster spots on the U.S. Open Water team for Tokyo.

No mention of Katie Grimes during finals tonight. 3rd place tonight. 3rd fastest of all time in 1500m for 15 yr olds. That to me was biggest story of the night. Way to to go Katie G.

Sucks to be #5 all time and not even have your own team record.

That is such a good point! Completely overlooked that. Thanks.

You may not be old enough to remember.