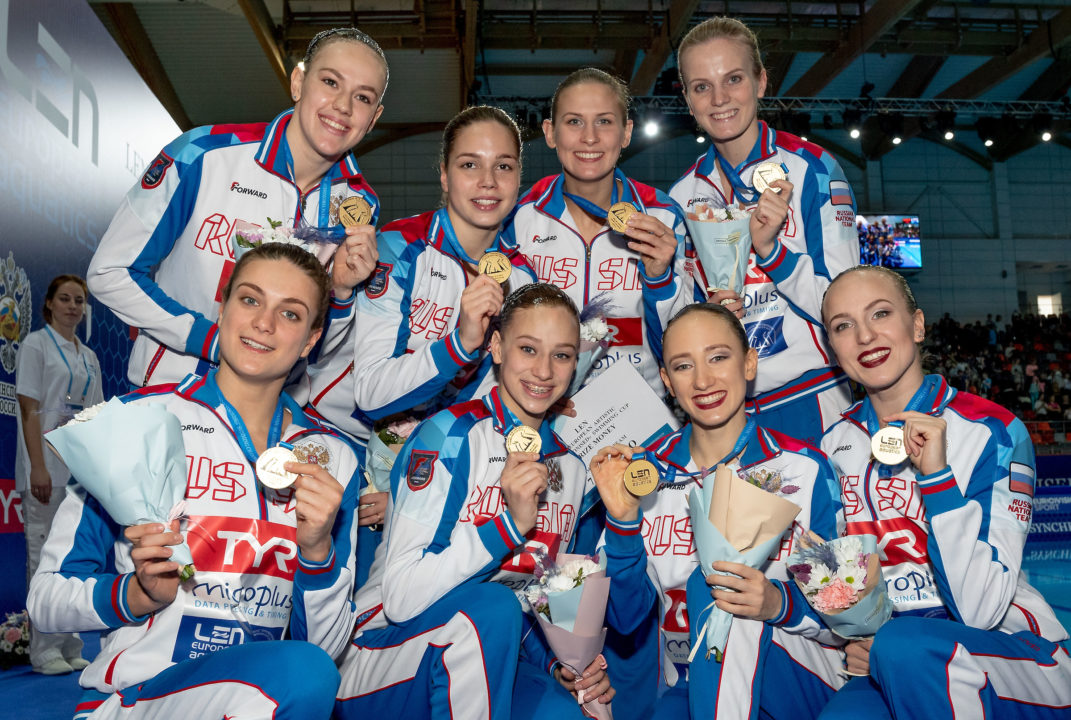 Russia was the first to ‘arrive’ to Tokyo among the European synchro swimmers by winning the team event at the LEN Artistic (Synchronised) Swimming Champions Cup in St. Petersburg. Current photo via Giorgio Scala/Deepbluemedia

The Big Ten recognized a total of 2,055 students competing in spring and at-large sports who have been named to the Academic All-Conference team.

5-time Olympic gold medalist Svetlana Romashina (right) was among the hosts of a global dryland session with some of the world’s best synchronized swimmers.

Russia was the first to ‘arrive’ to Tokyo among the European synchro swimmers by winning the team event at the LEN Artistic (Synchronized) Swimming Champions Cup in St. Petersburg. Since this feat secured an automatic Olympic berth for their duet too, the silver medalist Ukrainian pair also qualified for 2020. The last day saw another golden triple for the hosts.

Despite the morning start, the stands were filled once more in St. Petersburg and the local fans were cheering loudly right at the beginning when the Russian team, starting first, offered another majestic show.

The judges were thrilled too, 9.7s and 9.8s were flying all over the place, even a perfect 10 flashed on the scoreboard. However, soon we could witness in the mixed zone one of the drives behind the Russian successes. The head coach – and chief magician in the center of their golden age – Tatiana Pokrovskaya was all but happy. She seemed to care less of the marks, rather believed to her eyes and she was not really satisfied what she saw from the girls, so further improvements are due before the World Championships this summer, for sure.

Still, the quality of the current performance was more than enough to secure another gold as well as to book their spot at the 2020 Olympics in Tokyo. Spain came second with a truly outstanding and impressive choreography while the Greeks edged out the Italians for the bronze by 0.1 points.

The afternoon session produced the highest mark of the meet with all the good reasons as Svetlana Kolesnichenko and Svetlana Romashina offered a breath-taking performance. At times it seemed they had come from a different universe – despite no 10s this time, they still accumulated 97.4667 points, a visible sign of Romashina’s return to the pool after three years.

The 5-time Olympic, 18-time world and 10-time European champion, who was on ‘maternity leave’ since 2016, was in upbeat mood after the final. “I’m quite happy with this result and the way we performed” she said. “I thought it was going to be harder but it felt really good. Of course, we face a long road but it’s awesome to return to the competitions.”

With the Russian team having already been qualified, according to the rules it secured an automatic berth for their duet too, so the race for the second place was also important. At the end, the second Olympic spot went to the Ukrainians, they bettered the Spaniards by 1.6 points for the silver.

The outcome of the mixed duet free final sealed a golden finish for the Russians, their young duet clinched this title too, ahead of the Spaniards and the Italians.

The Championship Trophy remained in the hands of the hosts and the crowd was also delighted to see Svetlana Kolesnichenko receiving the LEN Award for her 2018 merits.