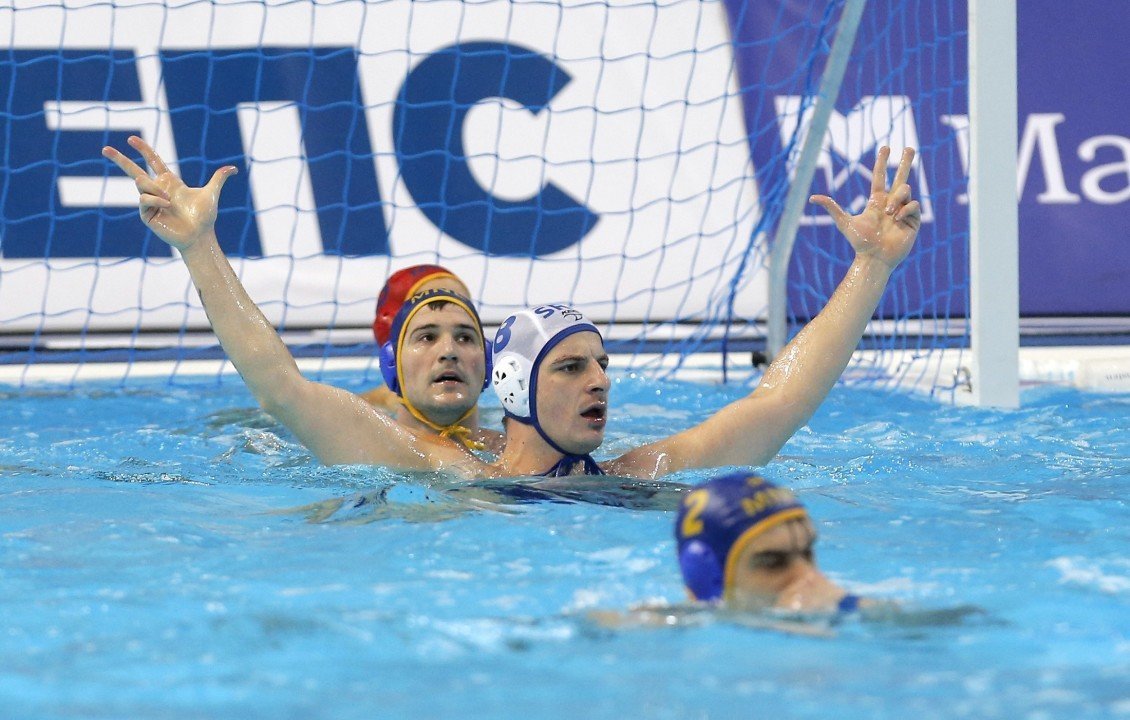 A Serbia-Hungary tie highlighted yesterday's water polo competition, along with a victory for Croatia over the American men. Current photo via Dusan Zivkovic/Belgrade2016

With just four seconds to go, gold medal favorites and defending world champions Serbia scored a goal to end their game in a tie. At the half, Hungary had an early lead 9-6, but Serbia played a strong second half, led by Filip Filipovic, who scored four goals. Norbert Hosnyánszky had three goals for Hungary. Serbia will play Greece at 8:00 am ET on Monday, and Hungary will play Australia Monday at 12:00 pm ET.

Team USA showrunner Tony Azevedo scored the first goal of the game halfway through the first quarter, but by the end of the first half, the teams were tied 3-3. At that point, the American team exchanged goalie Merrill Moses (who blocked seven shots in the first half) for McQuin Baron. Croatia saw real offensive success in the second half, scoring another four goals. Croatia’s Maro Jokovic and Andelo Setka led the scoring for Croatia with two goals each, while Azevedo had two goals for the US. The U.S. will play Spain next on Monday at 10:40 am ET, while Croatia plays Montenegro at 7:50 pm ET Monday.

Italy had an incredible comeback yesterday, scoring three unanswered goals to make up a two-point deficit in the last four minutes of the game. Italy’s goalkeeper Marco Del Lungo saved a shot from Spain in the last 30 seconds that could have brought the score up to a tie. Both teams play next on Monday, with Italy taking on France at 9:20 am ET and Spain playing the US at 10:40 am ET.

The Japanese team is playing in the Olympics for their first time in over three decades, but the Greece team shut down their hopes for an Olympic game victory. With 38 seconds left on the clock, Greece’s Emmanouil Mylonakis scored the winning goal. Angelos Vlachopoulos was the top Greek scorer with three goals, while Arai Atushi, Koji Takei, and Keigo Okawa scored two apiece for Japan.

For the full first half, Montenegro scored unanswered, ending up with 5-0 lead going into halftime. It was too much for France to come back from. Montenegro’s Radovic Aleksander led the scorers, going 3-3 with his shots. Montenegro will take on Croatia on Monday at 7:50 pm ET and France plays Italy Monday at 9:20 am ET.

Brazil put on a show for their hometown crowd, taking the lead in the first two minutes and never losing it. Goalkeeper Slobodan Soro saved a full 13 shots. Monday, Brazil will take on Japan at 6:30 pm ET and Australia will take on Hungary at 12 pm ET.