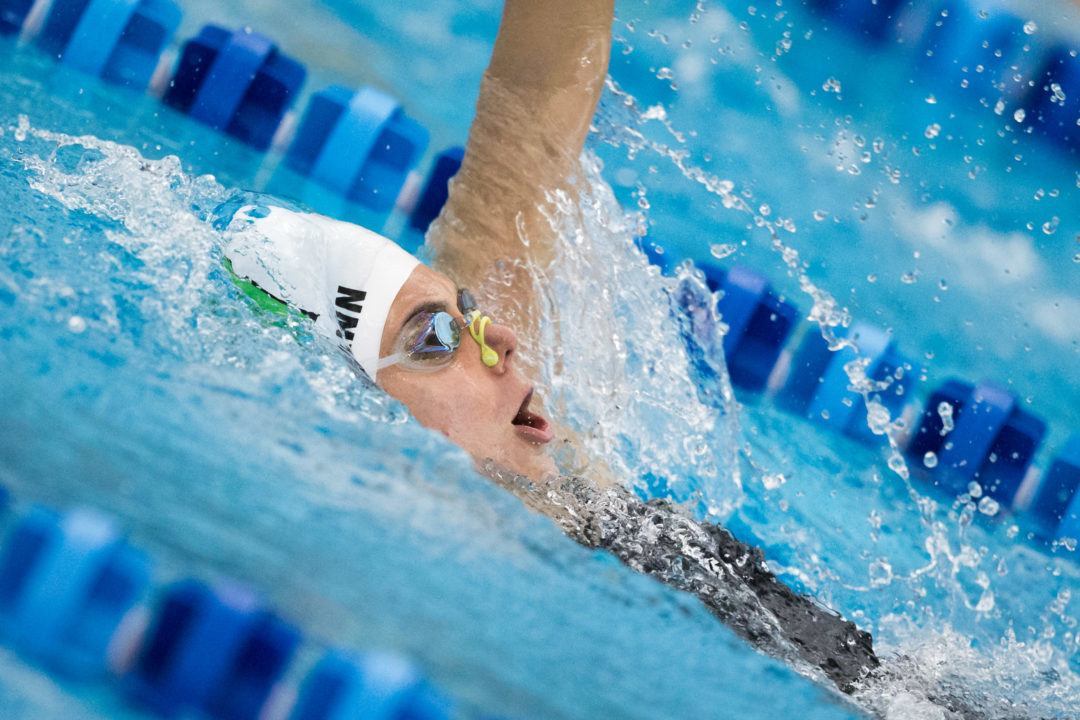 Lucie Nordmann (above) will be joined by younger sister Lilian at this year's Texas 6A State Championship meet. Archive photo via Tim Binning/TheSwimPictures.com

Call-up lists for the public school Texas High School State Championship meets have been released, and a showdown of epic proportions on both sides of the pool.

Ever since the University Interscholastic League (UIL) that governs most of the high school swimming in the state announced their realignments in the offseason, new alignments have given rise to new excitement for this year’s state championship meet. Besides trending 6A powerhouses from Westlake High School, the Woodlands High School, and Southlake Carroll High School, defending Texas 5A (smaller schools) boys’ state champions Austin Vandegrift are now in 6A.

On the girls’ side of the 6A (big schools) meet, The Woodlands High School and the starring Nodrmann sisters will look to overcome the defending champions from Westlake. The Woodlands didn’t graduate a single swimmer from their roster last year, and with the younger Lilian Nordmann entering the meet as the 4th seed in the 200 free and 3rd seed in the 100 fly as just a freshman, they’ve got the power to make up the 48-point deficit from last year. That’s especially so with Westlake High senior Victoria Edwards, a Texas commit, sitting out this year’s high school swimming season. She scored 36 points individually at last year’s state meet, including a title in the 100 fly, and was a part of two state-title winning relays.

In Class 5A, the battle is wide-open on the boys’ side. With 2 of the top 3 teams from last year’s meet (Vandegrift and Stratford) off to 6A, and the runners-up from Frisco being devastated by graduations, there’s no clear-cut favorites at this year’s meet – though a veteran team from Grapevine High near Dallas looks strong, as does a deep Kingwood Park High School.

On the girls, side, Magnolia High School has emerged as heavy favorites to win this year’s title. They’re the top-seeded team in all 3 relays led by another Texas A&M commit, 19th-ranked recruit Joy Field, leading the way. Magnolia is fed by the same rising Magnolia Aquatic Club that the Nordmann sisters of the Woodlands High School in 6A train for – close neighbors to the more historic Woodlands Swim Team.

Texas is unique from most states in the country in that they still hand out invites to the state championship meet via direct placement qualification from regional meets, rather than a time standard. The top 6 swimmers in each district qualify to one of 16 regional championships (8 in 5A, 8 in 6A). Then, the top 2 finishers in each region, plus the next 8-best regional A-finals swims overall, The A-final portion is important, because in one region, the fastest 100 breaststroke swim came from the B-final, causing some confusion among parents and coaches.

The UIL posts state qualifiers in two lists: the 16 automatic qualifiers (top 2 in each region), and then a separate list for “call ups.”

See all the lists here.

Class of 18 will be very impressive.

In the same vein as wanting to see the what if Bolles relay, It’d be cool to see a medley relay of Noah Henry, Matthew Willembring, Jack LeVant, and Clayton Bobo.

Actually, Henry, willenbring, and LeVant were all on the same club team at age 14 and set numerous Texas swimming records and even a NAG.

So much great talent in TX and an exciting group to watch, from the many talented freshmen qualifying to the seniors!
Good luck swimmers & teams!!