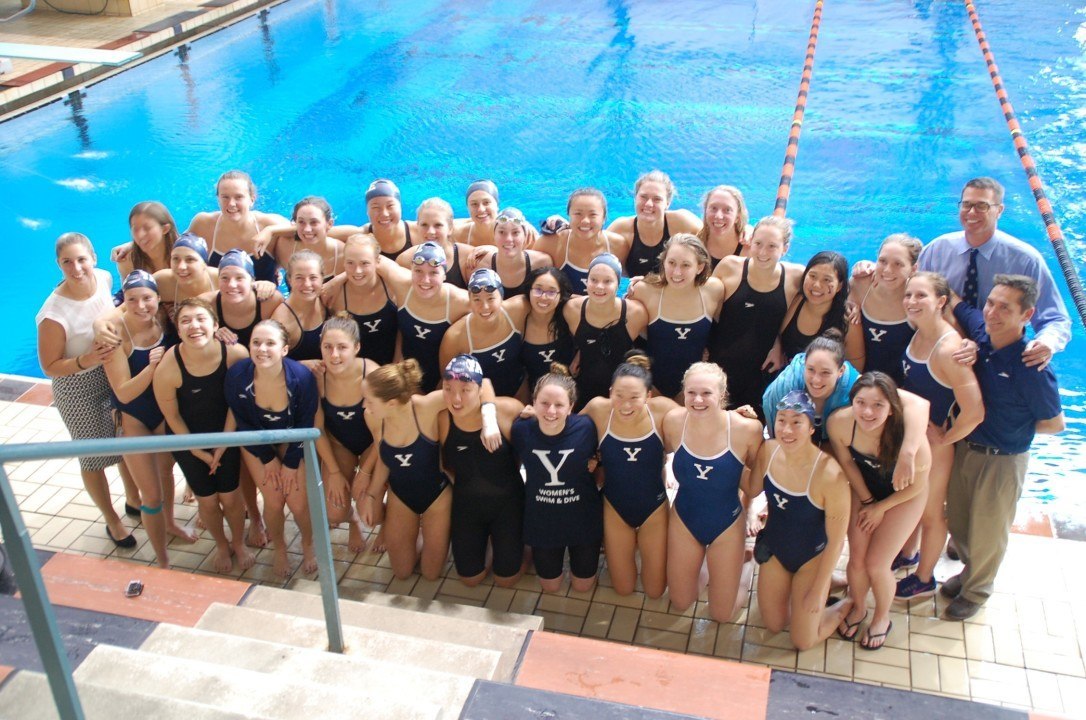 The Yale women completed an undefeated dual meet season with a pair of wins in a 2-day meet against Ivy League rivals Harvard and Princeton. Archive photo via Anne Lepesant

HARVARD VS. PRINCETON VS. YALE

The Yale women completed an undefeated dual meet season with a pair of wins in a 2-day meet against Ivy League rivals Harvard and Princeton. The Bulldogs now have a season record of 16-0 and an Ivy League record of 7-0.

Yale’s Danielle Liu was one of the top performers over the course of the meet, picking up 3 individual event victories. Her first win came in the 1000 free after she built a 2 seond lead over teammate Cailley Silbert (9:58.04) to win in a quick 9:56.08. Liu then completed the distance sweep with a 4:50.94 in the 500 free, holding off a late charge in a close race with teammate Isla Hutchinson-Maddox (4:51.30). Her final win came in the 200 IM, where she was within a second of the Pool Record with her winning time of 2:02.54.

NEW HAVEN, Conn.–The Yale women’s swimming and diving team built on their successes from day one to emerge victorious after day two of HYP competition. The Bulldogs defeated Harvard, 223.60-76.50 and defeated Princeton, 230-70.  This leaves the Bulldogs with an undefeated regular season record, 16-0 and 7-0 in the Ivy League.

Robert J.H. Kiphuth Head Coach of Women’s Swimming, Jim Henry, said that the victory required contributions from every team member and that the two wins get the team closer to their remaining end-of-season goals at the Ivy League Championships and NCAA Championships.  He added, “I will forever be grateful for this senior class for placing confidence in a vision and making it happen.”

Day two started off with a 1-2 finish by Talbott Paulsen and Lilybet MacRae in the 1-meter diving event with scores of 302.35 and 274.55 points, respectively.  McKenna Tennant took seventh with a score of 259.40 points.

The Bulldogs grabbed another 1-2 finish in the 500-yard freestyle, led by Danielle Liu in 4:50.94. Senior Isla Hutchinson-Maddox capped off her Yale swimming career with a second-place finish with a final time of 4:51.30.  Cailley Silbert and Kendall Brent pulled in a few extra points by finishing in fourth and sixth places, respectively.

In the 100-yard butterfly, Lili Margitai bested the field by more than half a second to win the event in 54.84.  Maddy Zimmerman tied for second with a Harvard competitor in 55.41.

The Bulldogs finished the meet on a strong note, with a victory and a new pool record in the 400-yard freestyle relay.  The “A” squad of Margitai, Hindley, Jameson and Zhou finished in 3:21.61, nearly four seconds ahead of their Harvard competitors.  The “B” and “C” squads took fourth and fifth places.

Now the team will return to training and preparing for the upcoming Ivy League Championships, which will be held in Providence, R.I., Feb. 15-18.

NEW HAVEN, Conn. – The Harvard women’s swimming and diving team closed the Ivy League portion of the regular season Saturday afternoon at the H-Y-P meet, defeating Princeton, but falling to Yale. Harvard took down Princeton by a tally of 187-113, but lost to Yale, 223.5-76.5.

“It was a fantastic meet,” said Stephanie Wriede Morawski ’92, The Costin Family Head Coach for Harvard Women’s Swimming & Diving. “The women swam and dove well. For where we want to be in the season, we’re right on. Everyone is excited for their taper for the Ivy Championships when it will all be even.”

Day two of H-Y-P began with the one-meter dive with Mikaela Thompson and Alisha Mah each earning top-five scores. Thompson claimed third with a 273.50, less than a point off second, while Mah was fourth with a 271.70.

Swimming events started with the 100 freestyle and another 3-4 finish for Harvard competitors. Freshman Miki Dahlke clocked in at 50.87, good for third, with Victoria Chan finishing right behind her. The 200 backstroke followed with junior Kristina Li grabbing a runner-up finish with a time of 2:00.50.

The distance freestyle event at 500 yards was extremely competitive, as sophomore Claire Pinson touched the wall in third at 4:52.54. Harvard placed a pair of student-athletes in the top five in the 100 butterfly, led by sophomore Brittany Usinger in second with a mark of 55.41. Mei Lynn Colby took fourth. Freshman Jerrica Li was the top Crimson finisher in the 200 IM, coming in third with her time of 2:05.81.

The meet wrapped up with the 400 free relay where the Crimson earned runner-up honors. Chan, Daniela Johnson, Gabby Simms and Dahlke stopped the clock in 3:25.10.

Harvard has a quick turnaround, hosting Northeastern at Blodgett Pool Sunday at 11 a.m. After that meet, the Crimson will have less than two weeks to prep for the Ivy League Championship, hosted by Brown, Feb. 15-18.

The Princeton women’s swimming and diving team completed its 2016-17 regular season Saturday with losses against both Yale and Harvard during the annual H-Y-P showdown weekend. However, head coach Susan Teeter knows that her squad, which had a handful of strong performances over the two-day meet, understands that the biggest goal still lies ahead.

“Our athletes swam and dove great,” said Teeter, who announced her retirement at the end of this, her 33rd season, in December. “I’m really proud of their fight. It’s never easy to have half of a team rested for their final competition of the year, while the other half is preparing for two weeks from now. We did a great job handling that, and we are excited to move forward for Ivies.”

The host Yale Bulldogs claimed the Ivy League dual meet title with victories of 230-70 over Princeton and 223.5-76.5 over Harvard. The Crimson claimed a 187-113 win over the Tigers to complete the weekend.

Sophomore Kathryn Didion posted one of Princeton’s best early performances, as she took second in the 100 breast in 1:04.50. Classmate Joanna Curry followed with a third-place finish in the 200 fly in 2:01.54, while junior tri-captain Maddy Veith took fourth in the 50 free in 23.47.

Freshman Natasha MacManus had the top diving showing for Princeton over the weekend, as she took fifth on the 1-meter board with 266.55 points.

Princeton is now off until Feb. 15, when the Ivy League Championships begin in Providence, R.I. The meet begins with a pair of relays on Wednesday night, the first time the league championship meet will extend over four days. Check back with GoPrincetonTigers.com over the next two weeks for complete coverage of the lead up to Ivies.