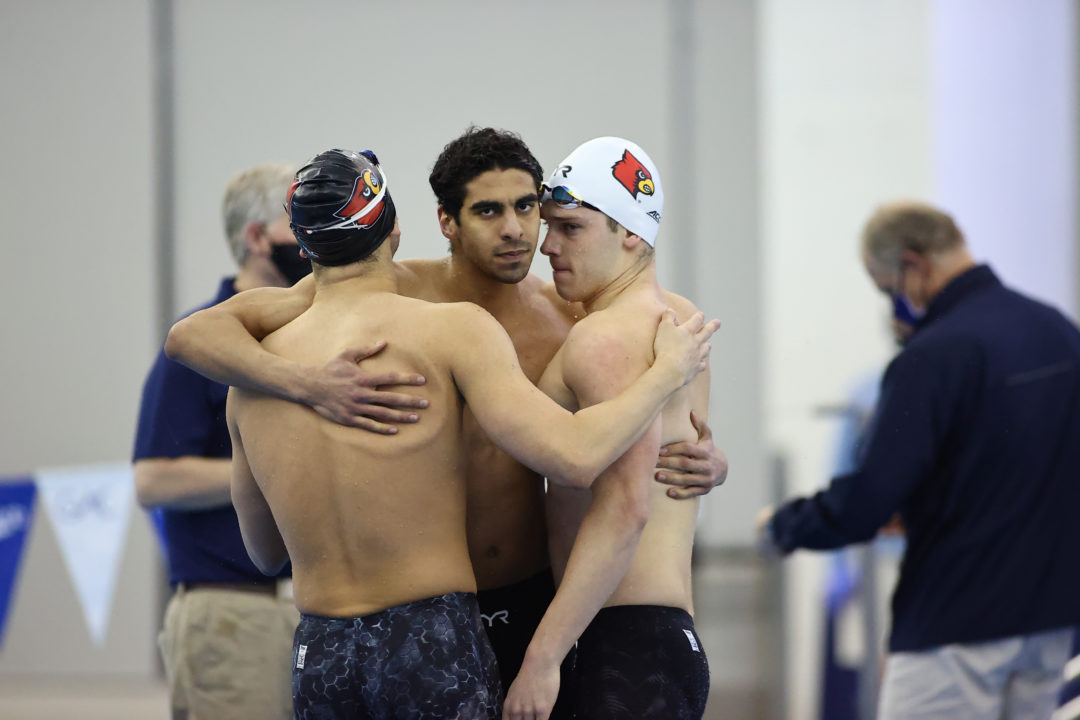 Louisville outperformed their projected finish by 14 points in the men's 800 free relay on Day 1 at 2021 NCAA Division I Men's Championships. Archive photo via Jaylynn Nash, the ACC

We are excited to be back at NCAAs after a year hiatus and Day One gave us a peek of the excitement to come.

Seven of the top eight seeds finished among the first eight; three of them exactly where they were seeded. Texas, Florida, and NC State held their psych sheet seedings of 1st, 4th, and 5th. Cal moved up one spot to 2nd, switching places with Texas A&M who moved to 3rd. Georgia jumped 2 places to finish 6th ahead of Stanford, who dropped to 7th. The biggest move came from Louisville, who came into the meet seeded 13th and blasted to 8th. Michigan, originally seed 8th, finished 11th.

Louisville had the most eye-popping performance, outswimming their ACC performance by 2.89 seconds. With the exception of Nicolas Albiero, who led off with the same time, to the hundredth, all legs went between .8-1.0 faster.

This comes a week after the Louisville women placed 13th with 108 points at the 2021 NCAA Women’s Swimming and Diving Championship and exceeded their seed by a whopping 53.5 points. That means they nearly doubled their seeded swimming points.

The Louisville men were seeded to score the 6th-most points this season with 252.5. While it seems a longshot that they’ll double that like the women did (that would give the men an emphatic NCAA title win), they’re well-on-their-way to improving that seed number as well.

Indiana and Virginia both improved 6 points in the standings, dropping 1.44 and 1.45 seconds, respectively.

At the other end of the spectrum, Michigan, Ohio State, and USC lost ground from their seedings. The Wolverines added 2.54 seconds from their Big Ten performance, which saw them win the conference title by 1.5 seconds over Ohio State. Patrick Callan was a tick faster than his B1G leadoff time (1:32.63 vs 1:32.67) and leg 3, but Jake Mitchell, Danny Berlitz, and Wyatt Davis were flat.

Similarly, Ohio State’s leadoff, Paul Delakis, was within a couple hundredths of his leadoff from the conference meet (1:31.93 vs 1:31.90 at B1Gs), but Hunter Armstrong, Shaw Satterfield, and Thomas Watkins were each between .5 and .9 off.

USC’s Alexei Sancov went 1:31.82 to lead off the Trojans’ 800 free relay tonight, which was .9 faster than he’d been on the relay at Pac-12s. The other three –Dominic Margarino, Max Saunders, and Harry Homans– varied between going 1.2 seconds and 1.6 seconds slower than at the conference meet.

Cal improved their time from seed more than Louisville, right? 3.3 seconds to 2.89 for Louisville. Still not as big of a scoring improvement as Louisville.

I mean, Kelsey Worrel Dahlia and Mallory Comerford both swam at Louisville.

Well at least those RatCoon Skin Hatted barfeeted boy VOLS did not finish last!! They whooped up on FSU. Lets go divers….please!!!

They got beat by Navy…..