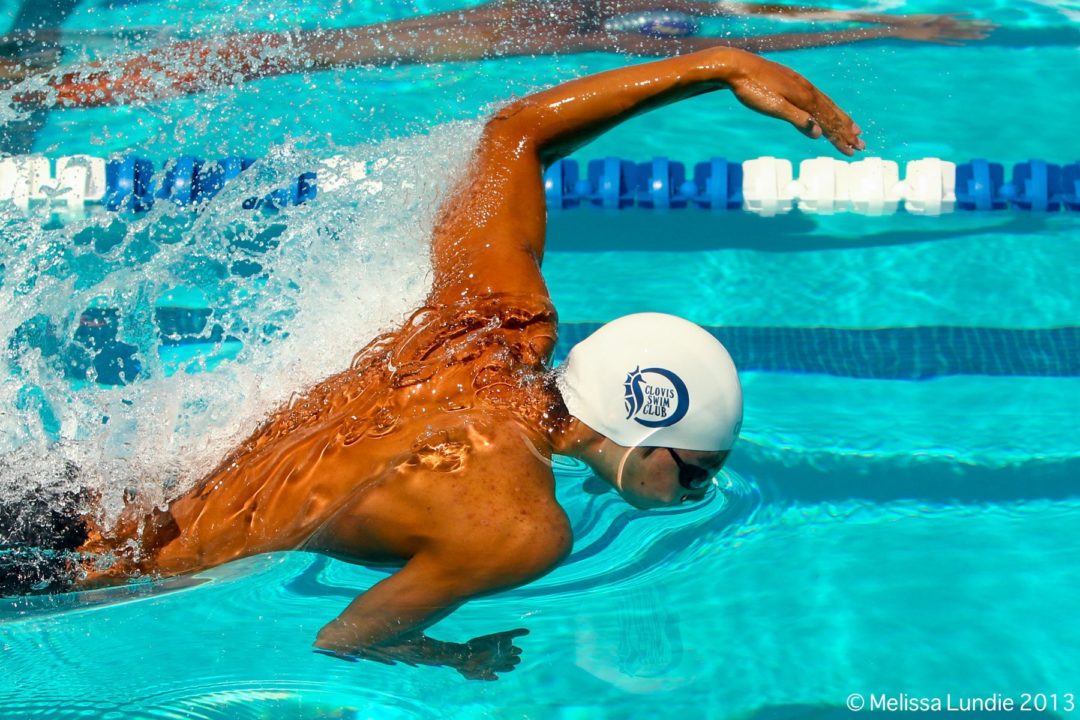 Connor Hoppe might miss a shot at a National High School Record after violating a newly-altered rule in the Sac-Joaquin Section. Archive photo via Melissa Lundie, melissalundie.com

Star swimmer Connor Hoppe, a commit to the defending NCAA Champions from Cal, has been ruled ineligible for the Sac Joaquin Section Championship meet, which is the highest championship meet for high school swimmers in his area, according to the Modesto Bee. Hoppe is the defending section champion in the 100 breaststroke, and had a chance at getting the National high School Record.

The rule that got Hoppe is a notorious one in California. He raced at the 2014 NCSA Junior Nationals representing the Clovis Swim Club, which coming in mid-March was after the start of the CIF swimming season.

The Sac Joaquin Section has a rule that during the high school season, swimmers can not compete for their club teams. They can still race at USA Swimming meets, but must do so unattached.

According to the Bee, Hoppe thought he would be okay given that he hadn’t started racing for Golden Valley High School yet. His understanding was that he just couldn’t compete for both teams at the same time, and that since he skipped his high school team’s first two dual meets, he was still in the clear to represent the Clovis Swim Club.

According to bylaw 2600.10 b in the section constitution “Once the official start date for the Section is determined (February 10), individuals FROM THAT POINT, must compete unattached in outside competitions.”

“I don’t think I have an option; it’s a clear violation,” Sac-Joaquin commissioner Pete Saco said to the Bee. “That rule has been around since 1981. It’s a violation.”

Hoppe and his brother Cameron have both been ruled ineligible to compete at the Sac Joaquin Section meet. What really makes this situation unique is that in other sections, the rule has remained the same: namely, if a swimmer has not yet competed for their high school team, they can still swim for their club team, regardless of the official start of the season. The majority of the swimmers who train with Clovis swim in a different section, meaning that they were unaffected by this new rule that is specific to Sac-Joaquin, which could have led to the confusion about what is, and isn’t, allowed.

This rule, and others in other sections, are in place in an effort by CIF federations to maintain some sanctity of high school athletics. The goal is to force swimmers to put at least some focus on their high school teams during the high school season.

Hoppe, while he says he did the same thing last year and knows many others who have done the same without any issue, is taking the high road.

“It’s disappointing, but at the same time it’s good motivation to get better,” Connor Hoppe said. “We still have an appeal on Monday and hopefully the decision will be overturned. All my coaches were unaware of the rule. The Sac-Joaquin Section is the only one that has this rule. It’s not like I was trying to break it. I had no idea.”

Were Hoppe’s appeal to be unsuccessful, it could be a missed shot at a potential High School National Record. He swam a 53.12 at NCSA’s, which is faster than the currently-recognized record of 53.24 done by Andrew Seliskar of Thomas Jefferson High School in Virginia in February. The overall National High School Record is 52.92, belonging to Jacob Molacek.

Hoppe would have simply had to come close to his best time at the Section meet to break the National Record.

Hoppe was a late-comer to swimming, switching over from basketball. He was a 1:02 as a freshman, a :57 as a sophomore, and a :54 as a junior to break the section record.

“In previous years, kids were allowed to swim attached up until the start of their high school meets, but in 2014, they quietly changed it to Feb 10th, regardless of HS schedule,” a local swim parent said of the new rule. “You would not have known it unless you read the CIF rules carefully. My son’s club almost made the same mistake. Most club coaches do not keep updated with CIF rule changes year to year. High school coaches may know the rule change but don’t have any control over how kids sign up for their club meets. Most of the time the parents or swimmers have to be on their toes. Makes no sense to make it so difficult. Time to change the rule or abolish it all together.”

In Wisconsin a similar rule is even more restrictive. During HS season an athlete can’t do ANYTHING related to their sport. This has been interpreted to prevent swimmers from entering triathlons because of the swimming leg, and track athletes from participating in charity “fun runs” if those occur during the HS season. Competing in a USA swimming event of any kind, even unattached, would be instant disqualification.

There are some byzantian rules for limited exceptions for national and international competitions, i.e. the Olympic Trials or the Olympics, but they are really narrow.

Every year we see a number of talented swimmers forgo HS swimming so they can stay with their club coach year round.

Clovis Swim Club and his coaches feel terrible about this situation. We all want what is best for Connor. We took 12 athletes to Orlando. 11 of them are eligible for their Section Championship. We were surprised to learn that each CIF section determines their own eligiblity rules. The issue at hand is that Sections may define their season of sport differently. Most people don’t realize the sacrifice that Connor, Cameron, and Charis have made to be a part of program. They commute an hour one way to be a part of our program. Connor and Cameron resides in a different CIF section than the rest of our athletes. CIF allows an exemption for USA Swimming National events which is… Read more »

If Connor’s appeal is denied, please ask the Section to allow him in the Trials on Friday. That way he can at least get a shot at the record. As a Central Californian, I’d be proud to see Connor’s name in the national record.

What a diplomatic post. Clovis sounds like a class act! Good luck to Connor! Hope this works and best of luck making Olympic Trials.

Interesting about Polo. We don’t have much of that in the east!

The top two recruits in the country for the Class of 2016 (girls; source: collegeswimming.com) are both from Wisconsin, and both swim high school. A number of other high-performing swimmers now in college (Drew TeDuits, NCAA champion; Ivy Martin, Big 10 record-holder and champion; Derek Toomey, Big 10 champion) also swam for their high schools in Wisconsin.

The vast majority of Wisconsin’s best high-school aged talent swim for their high schools. Only a few don’t.

I believe it is a noteworthy mention that the high school coach who called him on this rule, waited until he had already competed in 6 high school competitions after returning from NCSA Juniors. If the infraction was brought to the section’s attention earlier, a possible suspension from the next competition would have been a likely punishment. Instead, he doesn’t report it until CIF is the only meet left on the schedule and the ruling is ineligible for CIF.
Yes, a rule was broken, but it’s unfortunate that there seems to be malicious intent behind the coach who reported the violation.

Al, I agree with you 100%. The only reason CIF learned about Conner’s mistake is some coach reported him in the hopes of eliminating the best competition. I do not believe CIF routinely checks on every swimmer for rule violations. There are way too many swimmers to check. Obviously this coach does not want to beat Conner fair and square.

public high schools are becoming more like prisons every day…..

oh cuz we know homeschooling is the best option for everyone, right?? haha get outta here