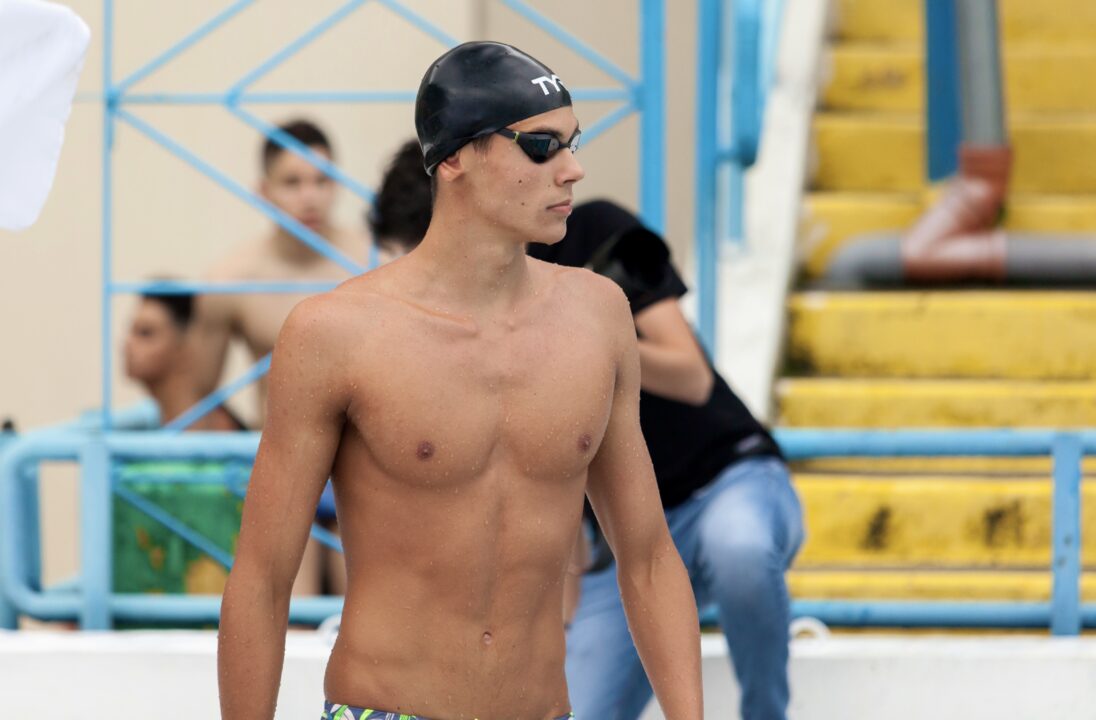 Day 2 of the European Junior Championships is set to feature David Popovici in the men’s 100 freestyle, where he will chase his own WJR. Current photo via Tudor Pirvu

There were no scratches for day 2 prelims at the 2021 European Junior Championships, which will consist of the men’s 100 freestyle, women’s 100 backstroke, men’s 100 breaststroke, women’s 200 butterfly, mixed 4×100 freestyle relay, and men’s 1500 freestyle.

After breaking the World Junior Record leading off the 4×100 freestyle relay, Romanian standout David Popovici will enter the men’s 100 freestyle as the heavy gold medal favorite. Popovici is entered in the event with a time of 48.08, placing him a second ahead of the field. However, he has already been as fast as 47.56 this week with his record breaking swim, which he will attempt to lower in the individual race.

The women’s 100 backstroke will be a much closer race, with 5 swimmers seeded under 1:01.50. Currently, Spain’s Carmen Weiler Sastre holds the top seed in the event with her time of 1:00.66, with Italian Erika Gaetani close behind with her entry time of 1:01.03. Although both swimmers still have time to drop, there is a chance someone could dip under the 1:00 barrier during the competition.

Swimmers will also be chasing the 1:00 barrier in the men’s 100 breaststroke, where Ukrainian Volodymyr Lisovets currently holds the top seed by over a half second in a time of 1:00.42. Lisovets’ Ukrainian teammate Maksym Tkachuk is currently seeded third overall with his entry time of 1:01.50, giving them the chance to sweep the podium.

In the women’s 200 butterfly, Hungarian Reka Nyiradi holds the top seed, looking to uphold her country’s strong reputation in the event. Nyiradi’s seed time of 2:10.64 falls only .3 ahead of Russian Anastasiia Markova, who is entered with a time of 2:10.87.

Turkey currently holds the top two seeds in the men’s 200 IM, with Sanberk Yigit Oktar leading the way with his seed time of 2:00.94. Oktar’s teammate Berke Saka holds the second seed in a time of 2:01.58. Both men will be chasing the 2:00 barrier in the event.

After winning the men’s 4×100 freestyle relay, Russia will look to pick up their second relay medal of the week in the mixed 4×100 medley relay. Other teams to keep an eye on in the event include Italy, Hungary, and Poland. Out of the three countries, Poland looks to have the most momentum after collecting bronze in the men’s 4×100 freestyle relay. Notably, Romania is not entered in the relay, meaning the aforementioned Popovici will not contest the event.

The morning will wrap up with the men’s 1500 freestyle, where Italy’s Luca De Tullio and Turkey’s Mert Kilavus are expected to contest for the gold medal. The two swimmers are currently seeded 5 seconds ahead of the rest of the field with times of 15:05.31 and 15:06.42, respectively.

I don’t know if this was the easiest 49.50 I’ve ever seen (a classic lol), but certainly that swum with the nicest and most relaxed style.

There will come a day when nobody will beat him again & that day is coming soon. Saw the video of him going 1:46 low a few weeks ago. The pool was a bathtub. His start is just ok, his turns are abysmal & his underwaters are nonexistent. And he went 1:46 low.

His stroke is high art. Shades of Popov. He is incredible.

All of this is true. So much improvement just to be made with turns and SDK

He breathed straight out of every turn on that 1:46

His turn looked pretty good on this 47.5 he was just too close

It will be outstanding if he’s the one to win gold in Tokyo .. his back half seems incredibly fast .. but let’s see how he goes individually first

Incredible performance. But has he peaked too early for the games? It hardly matters since he has a very long and successful career ahead of him anyway

Can someone explain to me about pre-workout like I am 5 years old. People talk about Dressel having a lot? How much is a lot? Is it a powder?

I don’t get all the Dressel preworkout references either. I would think a lot of preworkouts would probably contain banned substances.

Probably very high doses of caffeine. Whatever he’s taking he looks like he’s on m-eth in some of his post-race interviews.

With any other swimmer I would agree, but the kid is 16 so maybe this isn’t his peak.

I had thought he already had his best swim for the year at 48.0. I was thinking he would go a tad slower at the Olympics. I was just so impressed with 48 low. Now he goes this fast?! Wow…