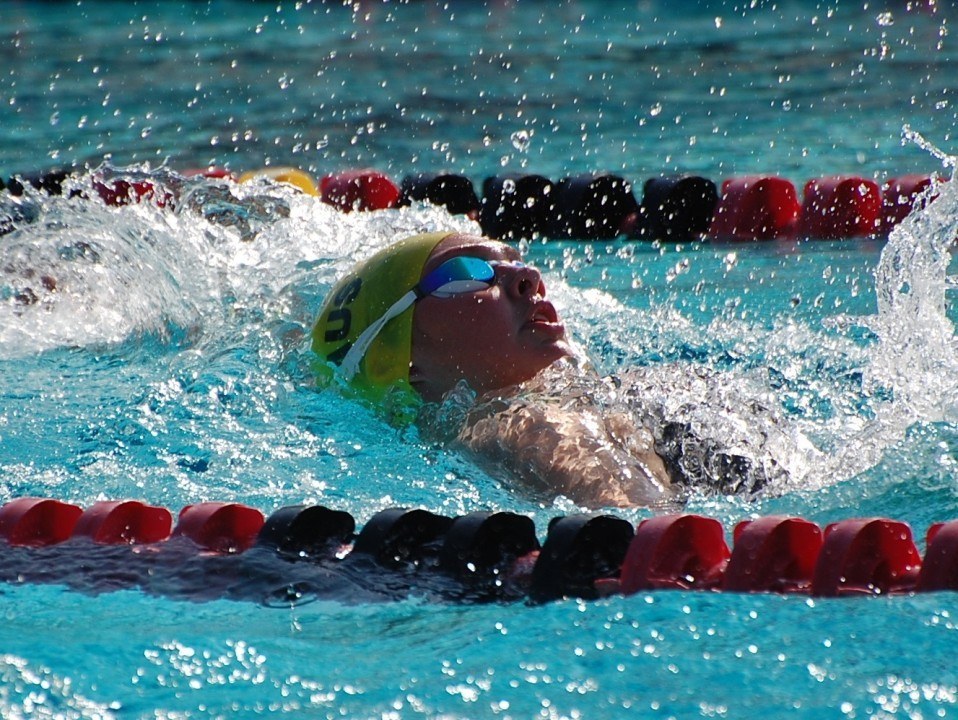 Maddison Elliott (above) has been classified as an S9 after her early-week review, and could be moved to that new group pending the outcome of her race observation on Friday. Archive photo via Anne Lepesant

Australian Paralympic champions Maddison Elliott and Tiffany Thomas Kane have both been reclassified after this week’s classification reviews in Indianapolis. The final step of cementing their new classifications will be a race observation during this weekend’s World Para Swimming World Series meet. Officials choose from the events that the swimmer was already entered in on the first day, and make final observations in a racing environment to validate the controlled testing done earlier in the week.

The 18-year old Elliott, who was a late addition to this week’s classification docket, has won 9 Paralympic medals, including 4 golds, while compete in the S8 classification, but with the release of Friday morning’s meet program, she is now listed as swimming in the S9 and SB9 classes in her first two events, the 400 free and 100 breaststroke. Elliott has bench and water tested as an S9 before, however, and still wound up in class S8, so the results of her race observation will be crucial.

Likewise, Tiffany Thomas Kane, who made shockwaves in 2015 when she broke the SB6 World Record in the 100 breaststroke at just 13 years old, has been reclassified in the SB7 category for her first event, that same 100 breaststroke. Thomas Kane, who is still only 15 years old, is of short stature, which usually means athletes are classified in the S6 or S7 categories based on height.

American Leanne Smith, one of the more controversial classifications of 2017 so far, is back to the SB3 class. She swam as an S3 at the World Series stop in Copenhagen and broke the World Record in the 50 fly by 3 seconds. She was then moved to the S4 classification in finals and dropped another 4 seconds to break that World Record by almost 3 seconds as well. She set an American Record in prelims of the S3 100 free by 41 seconds in that meet as well.

Other results, based on Friday morning’s programs, from this week’s classifications:

If Elliott has bench tested 3 times as an S9, and sand bags another observation swim in order to be classed back to an 8, again for the 3rd time, she should be banned from the sport. Her usual is to add significant time to her observation swim, get placed back down as an 8 for finals and set a new record. What a blessing to be a stronger and more able athlete with CP at the age of 18, than when you started swimming and racing. Patterson’s whole act is just beyond comprehension.

The same could be said for Konkoly from the US. She should voluntarily be reclassified. She is a stronger better version of herself now, in comparison… Read more »

I would suggest to Dr Peter van de Vliet that he gets on a plane to Indianapolis and that he personally examine Lakeisha Patterson for the tell tale clinical signs of an upper motor neurone lesion. I am sure he would be familiar with these signs of a central nervous system injury. In my opinion it is highly likely that these signs would be absent. She provides comical but offensive entertainment.

Sadly it is a utter disgrace what is going on with Lakeisha Patterson, she smashed 20 seconds of the 400m freestyle at RIO, she drives a car, dances at discos on the Sunshine coast, uses a surf-ski in the surf at Maroochydore beach with-out any problems. She is also a former martial arts Champion from Victoria. WHAT IS GOING ON PEOPLE?

Cheating at its best and the sad thing is the Ipc have seen all this and can not comment on , because she could have underlying issues that might just tip her to be lower class ,
The eveidemce apparently is not hard eveidemce
Ipc are well aware of a few Aussie and British swimmers they are being monitored???
Yeah and I believe in Santa Claus
These people will be cheating for a long time yet and word is out that Maddison Elliot will be going back to an s8 as Australia is going to protest , hummmm let’s watch this space eh ……

Lakeisha Patterson is making a complete fool of the Paralympic movement including classifiers, her genuinely disabled competitors and herself. She needs to be banned, gone and those who fascilitated it. Crazy that she retained S8 given the available evidence. This only proves beyond doubt that the classification system is absolutely not fit for purpose and Australia are teaching and encouraging swimmers to cheat. It is heads out of bums time Xavier Gonzalez and Peter van de Vliet. You seriously need to explain to the rest of us who have not fallen down the rabbit hole why the heck Lakeisha Patterson is still involved in Para sport!

I think they are both mentally ill. I won’t engage them anymore as I think they harm the sport

That’s a bit rude to say don’t you think TAA?

That’s ok. She can go ask god for forgiveness

This was what was said in Bonn by the head , he said now it had gone professional there is money around , and he is well aware of cheating going on but it is proving it with hard eveidemce and people evoking forward , they promised to protect whistle blower ( his words ) nut mother have come forward with the help yet they know it is happening , he also said let’s not forget on medical letters that there could be underlying issues , as well as someone disability , ……..
but that’s the trouble swimmers diaability are private and confidential, so you could be saying anything to become a lower class , Ipc are
Very… Read more »