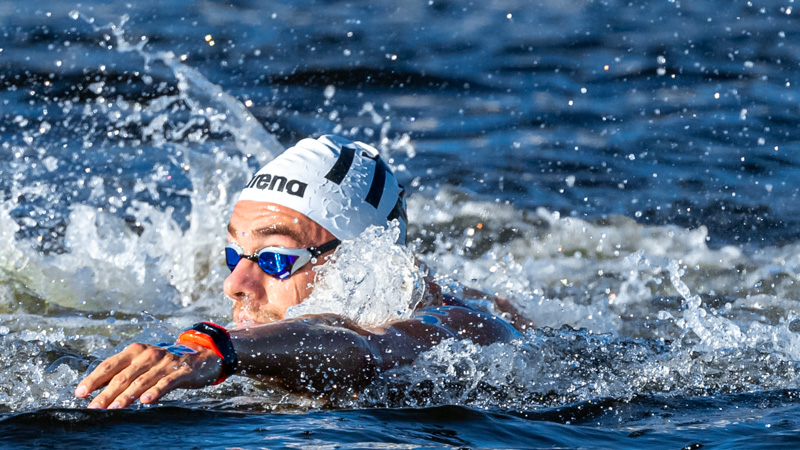 European title-holder Gregorio Paltrinieri of Italy claimed its first win in the 2022 edition of the LEN Open Water Cup after two bronze medal finish in the previous legs. The women’s race ended in a stunning way as Hungary’s Mira Szimcsak out-touched the favourites to land her first big win in her career.

With most of his foreign arch-rivals skipping this leg staged at the shores of Sardinia, Gregorio Paltrinieri faced only ‘in-house’ challenges this time and just as in Eilat, Domenico Acerenza proved to be his toughest rival.

While his youngster managed to pass him to claim silver in the opening race, this time the Olympic medallist withstood the pressure and hit the panel 0.8 sec ahead of his team-mate. Last October he also won here.

It was an all-Italian affair at the end as Piombino runner-up Marcello Guidi came third, ahead of two other teammates. The highest-ranked foreigners behind them were the two surprise Olympic heroes, Israeli Matan Roditi (4th in Tokyo, 6th here) and Greek Athanasios Kyginakis (5th in Tokyo, 7th here).

The women’s competition produced an unexpected outcome. Hungary’s 18-year-old prodigy Mira Szimcsak, who had a 5km gold from the 2018 junior Europeans and a couple of relay-medals from other age-group meets, held on with the seniors and in an extremely tight finish she out-touched Brazil’s regular World Champs participant Vivian Jungblut and Italy’s 9-time European champion Rachele Bruni. It was a real thriller as only 0.1sec separated the three medallists! Giulia Gabbrielleschi, who was third a week ago in Piombino behind Bruni, came fourth this time.

The series shall resume after the FINA World Championships, the next leg is due in Belgrade on 10 July.