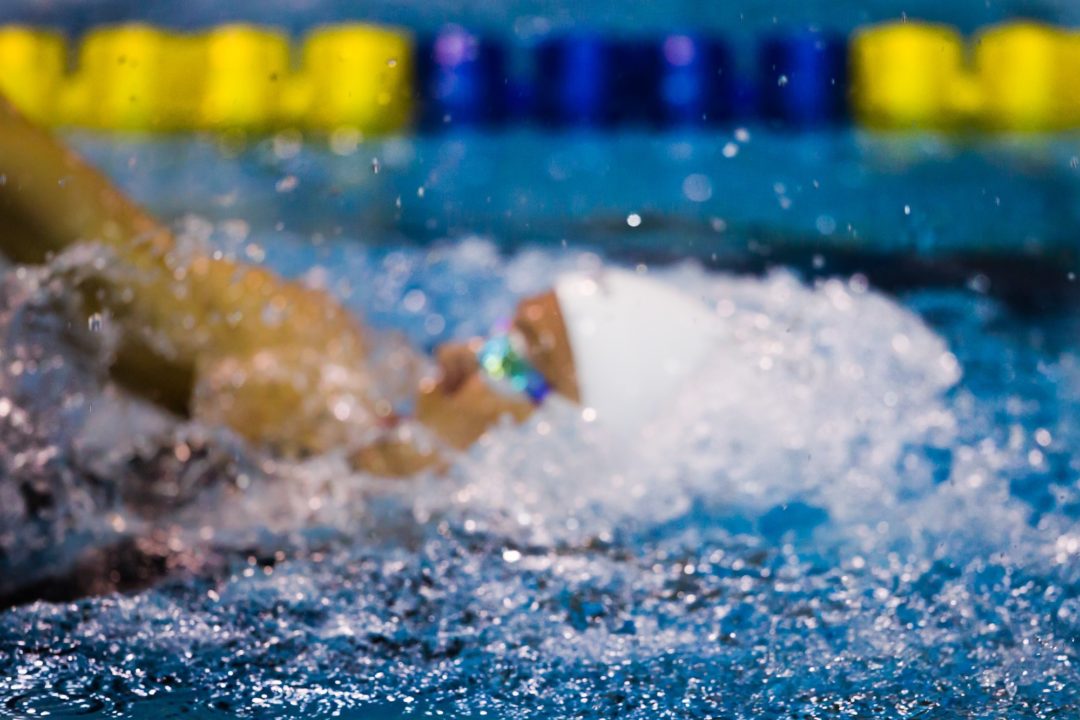 The Ottawa native is one of several top recruits at the National Swim Centre – Vancouver, where she’s training under coach Tom Johnson and studying at the University of British Columbia. Current photo via Tim Binning/TheSwimPictures.com

Erika Seltenreich-Hodgson has no problem hitting the books.

The Ottawa native is one of several top recruits at the National Swim Centre – Vancouver, where she’s training under coach Tom Johnson and studying at the University of British Columbia.

It’s no surprise to those who know her that she’s taking English courses in the Faculty of Arts. If there’s anything the 18-year-old loves more than swimming, it’s reading. And when she’s not at one of her nine practices a week in the pool or doing dry-land training, she can often be found with her nose in a book.

“It’s my favourite thing to do,” says Seltenreich-Hodgson, who lists the Harry Potter series as her all-time favourite.

She also enjoys writing, especially poetry. Sometimes she has to be careful reading doesn’t get in the way of her training schedule.

“I’ll end up going to bed slightly later than I should because I like to read before bed and I end up getting so absorbed I don’t know what time it is,” she says with a laugh. “I have pulled some dumb all-nighters because of it. During busy swim season I don’t buy new books. I won’t sleep.”

Reading obviously hasn’t slowed her down too much. Seltenreich-Hodgson won two medals at the 2012 Junior Pan Pacific Championships in Hawaii, including a gold in the 200-metre individual medley. She followed up by making her first senior national team earlier this year, when she represented Canada at the FINA World Championships in Barcelona.

Moving halfway across the country has been a big adjustment so far as she learns to live on her own and balance her coursework at UBC with training.

“You can make your (class) schedule around swim practice, so my timing fits and everything and I have some nap time during the day,” she says. “ I’ve been having a really good time. The training is super duper intense and so is the dry-land. That’s fun and hard and good and bad all at the same time. I know I’m getting a lot out of it. It’s more intense than I’ve ever been used to.”

Seltenreich-Hodgson didn’t think she would end up staying in Canada for her post-secondary studies, but her mind was changed when she saw everything the Vancouver option had to offer.

“I was 95 per cent certain I would choose a school in the States. I didn’t pick a favourite, but I was on the fence about Texas A&M or Georgia. I was really certain I was going to go one of those two places,” she recalls. “I was not thinking I was going to go (to UBC), then I went on the recruiting trip and completely changed my mind.”

Like many teenagers, Seltenreich-Hodgson was looking for a new experience away from home, a good education and a chance to broaden her horizons by meeting new people. UBC and the National Swim Centre provided the best of both worlds.

“I came here and realized that knowing some (other swimmers training at UBC) I had a support group of people I’ve known so many years, which is really great,” she says. “I actually felt at home here, I think that was one of the major (factors). And I’ve met so many different cool people here. I knew 15 or 20 people on the swimming team, but there’s thousands of people at school so I completely get the best of both worlds.”

Now that she has her first senior world championships out of the way, Seltenreich-Hodgson is looking to improve her standing on the world stage. She advanced to a semifinal in the 200-metre individual medley with a time of 2:13.84. A debut to be proud of no doubt, but she admits she wished for better in the semifinal, where she finished 16th in 2:16.12.

“I was really happy with my morning swim because I’m not generally a great morning swimmer. For (semis) it was packed, all these people are screaming, there’s spotlights. It’s exciting but at the same time so nerve-wracking because I’d never been in that situation before. On the blocks I was so absorbed in what was happening that I didn’t even think about my race,” she says.

Seltenreich-Hodgson, who also finished 19th in the 400-m IM (4:46.11) says she has rarely had problems with nerves at past meets.

“I swam my 200 IM but was not in the correct mind-space for that,” she says. “Next time since I’ve been in that kind of experience before I won’t have the same kind of nerves. It will be different and I’ll be able to focus on more of the positive aspect.”

She hopes to have another chance to shine next summer at the Commonwealth Games in Glasgow, Scotland and the Pan Pacific Championships in Gold Coast, Australia.

The only thing she might wish for as much as a senior international medal? A new Harry Potter book.

“I would die of excitement.”