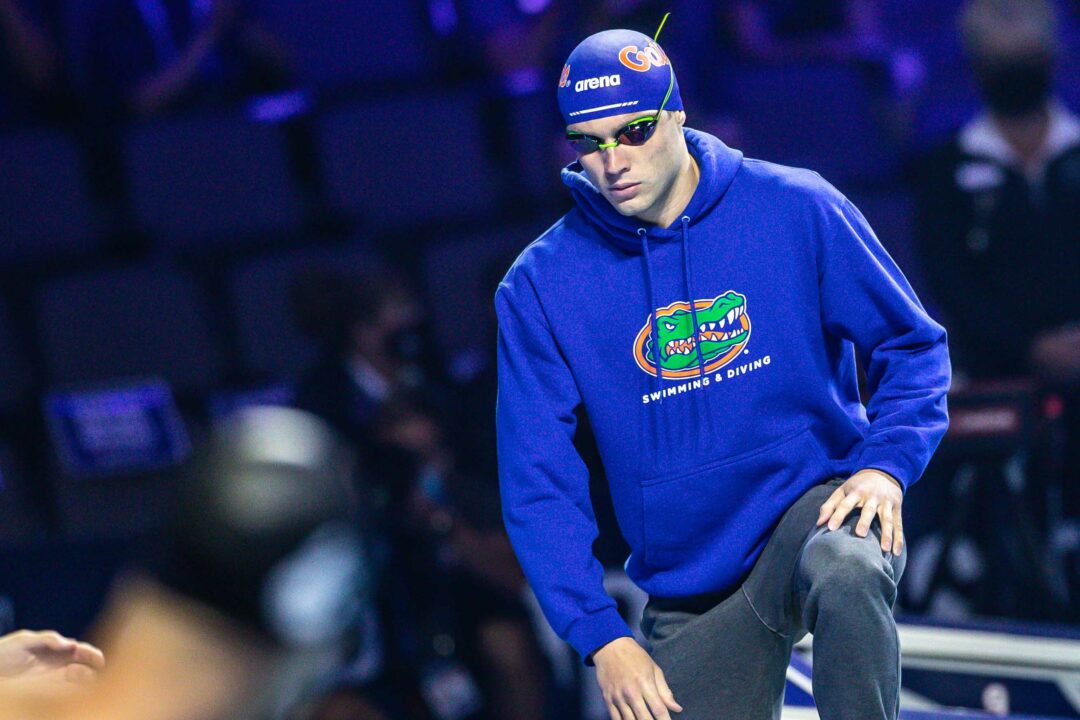 Bobby Finke (above) won the 800 and 1500 free at the Tokyo 2020 Summer Olympics. He and Kieran Smith both picked up wins for Florida on Saturday. Archive photo via Jack Spitser/Spitser Photography

Both the University of Florida and Florida Atlantic kicked off their 2021-2022 intercollegiate swimming season on Saturday, with the Gators heading south and coming back with a pair of victories.

The Gators were without their famous new volunteer assistant Katie Ledecky for the meet. She was back home in Washington, D.C., where besides media appearances, she spoke at an event at George Washington University, had a reunion at Stone Ridge High School, and on Sunday was in the Washington Nationals clubhouse (presumably to throw out a first pitch).

This was, however, the debut of Anthony Nesty as the head coach of the Florida women’s team. Nesty has served as the men’s team head coach for the last 3 seasons, but this is his first leading the co-ed program.

“Today was a good start to the season,” Florida head coach Anthony Nesty said. “This gives us a baseline that we needed to work from. We have a lot of work ahead of us and we will continue to focus on our team objectives daily. This meet gave the freshmen their first opportunity to travel and experience competition on the road. On Monday, we will be back to work. Many thanks to our dedicated staff who remain committed and focused on team goals. Thank you also to our Administration who greatly support our program with passion.”

Five Florida Gators picked up their first wins for the program in the meet. Freshmen Raphael Rached Windmuller, Anna Auld, Olivia Peoples, and Joaquin Gonzalez Pinero all got their first collegiate wins, while University of Arkansas diving transfer Maha Amer won the 3-meter event for her first win as a Gator.

Florida’s two NCAA champions and Olympians kicked off their season with victories on Saturday.

Smith has had most of his recent success as a middle-distance freestyler: he’s is the American and NCAA Record holder in the 500 free, the 2021 NCAA Champion in the 200 free, and won an Olympic bronze medal over the summer in the 400 free. Coming out of high school, though, he was as much a backstroker as anything. His 22.51 leadoff on Florida’s “B” medley relay was the team’s fastest result, .05 seconds better than sophomore Adam Chaney, who led off the team’s runner-up 200 medley relay at last year’s NCAA Championship meet.

With Smith on the team’s other four relays at NCAAs, Chaney is still the odds-on favorite to lead off that group again this year, but Smith’s Saturday swims at least give head coach Nesty something to think about going forward.

Bobby Finke, meanwhile, picked up his first win of the season in an “off-event” as well, the 200 backstroke. There he swam 1:46.88 to lead the field by almost 8 seconds. His best time in that event is 1:44.00 from a November dual meet last season.

Finke is the defending NCAA Champion in the 400 IM, so he’s capable in all four strokes. He is also the defending champion in the 1650 free, and the NCAA, American, and U.S. Open Record holder in that event. Over the summer, Finke surprised to win both the 800 and the 1500 meter freestyles at the Tokyo 2020 Olympic Games.

Florida’s Adam Chaney had one of the best sprint seasons last year that we’ve seen by an American sprinter since Caeleb Dressel, placing 3rd at the NCAA Championships in the 50 free, 9th in the 100 back (with the 3rd best time overall, racing out of the B final), and 25th in the 100 free.

He swam the event once last season, later in the year in a mid-season prelims/finals dual against Auburn, where he went 1:39.26. His best time is a 1:35.99 from his junior year of high school.

Senior Vanessa Pearl didn’t race at the meet, but Florida’s other top returning NCAA scorers on the women’s side did, and they focused more on primary events than the men.

That 50 free swim for her is faster than she led off her sophomore season, the most recent comparable season pre-COVID.

Meanwhile, junior Tylor Mathieu kicked off her year with wins in the 200 free (1:49.32) and 200 breast (2:14.58). Primarily a middle distance freestyler, she was 11th at NCAAs last year in the 500 and 37th in the 200. She hasn’t swum the 200 free much early in the season in previous college seasons, so it’s hard to get a full read on her time, but she does tend to improve on this race throughout the season. Last year, she swam it first at the team’s “mid-season dual” against Auburn, swam a best time, and then proceeded to swim another best time in January, even before the NCAA Championshisp.

Florida Atlantic junior Rateb Hussein, a native of Cairo, Egypt, picked up his team’s only win on the day. He won the 100 fly in 48.92, beating out Florida’s Jace Crawford, who was 2nd in 49.13.

Hussein’s winning time in that event is just 1.6 seconds away from his own school record.

The Gators do return All-American Eric Friese in that event this season, who swam and won two other races (100 free, 100 breast) on Saturday, but butterfly and breaststroke depth are the biggest holes in their swimming lineup this season.

The Gators will be back in action at the end of the month when they host a dual meet against Georgia to open their SEC schedule. FAU will next race at the FIU Fall Classic meet, hosted by their cross-town rivals Florida International, this coming weekend.

i suppose Bobby Fink can do a great 2free LC too?

I think Smith, Finke, and Chaney are in store for some jaw-dropping swims this year.

There’s a chance Florida wins every free event this year, which I don’t remember happening in recent memory

Stanford women did it with Ledecky and Manuel.

Bobby Finke comin’ ’round for some victory laps

If she is, that’s news to us. She’s still listed on Florida’s roster.