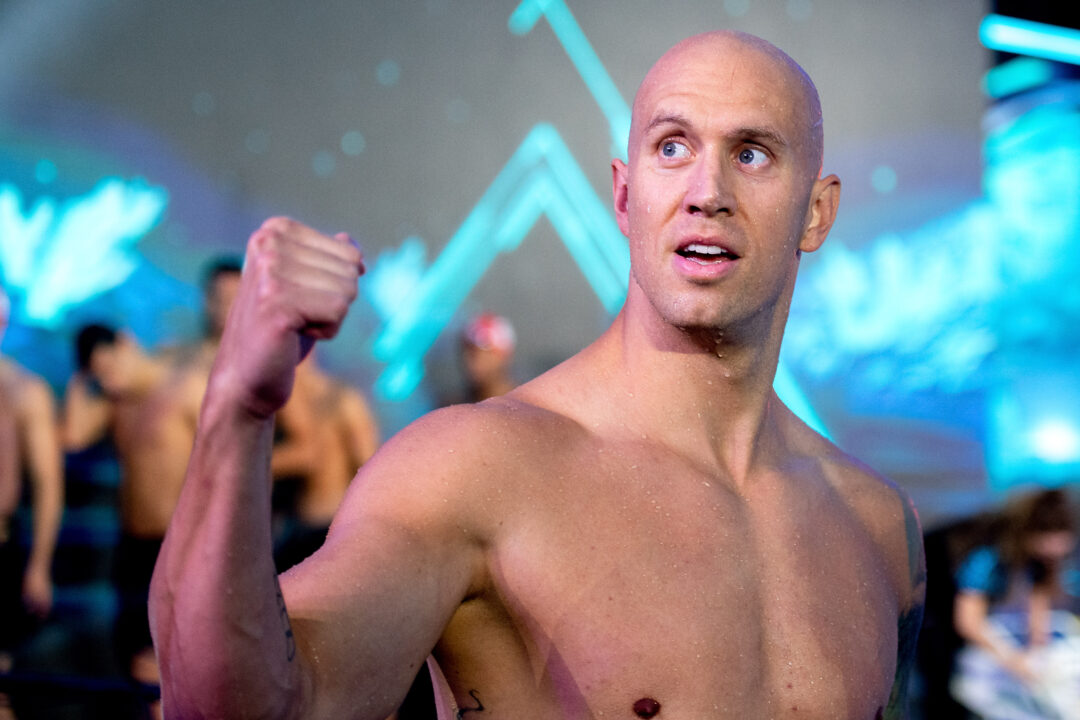 After making a comeback to the sport following an 8-year long retirement, Olympic bronze medalist Brent Hayden has confirmed that he is still training and even teased a potential big for the Paris 2024 Games. Hayden posted on Instagram saying that he’s “not done yet.”

Hayden said that despite his successes and failures in the pool throughout his career, he still feels as though he has more in him. That career dates back to more than two decades ago when Hayden began swimming. It was in 2002 when Hayden won his first senior international medals when he won bronze in both the 4×100 freestyle and 4×100 medley relays at the Commonwealth Games in Manchester, England.

Hayden raced for Canada consistently for a decade following those Games, including performances at several Olympic Games, World Championships, and Pan Pacific Championships. In 2006 he won Pan Pac gold in the 100 freestyle and followed that up a year later with his first World Championships title in the same event.

At the 2007 World Championships in Melbourne, Australia he and Italy’s Filippo Magnini shared the crown with a 48.43 to defeat a host of sprint legends including Eamon Sullivan, César Cielo, Jason Lezak, Pieter van den Hoogenband, and Roland Schoeman.

At the London, 2012 Olympics Hayden got onto the podium again in the 100 freestyle with a 47.80 for bronze behind Nathan Adrian (47.52) and James Magnussen (47.53). After London, Hayden retired from the sport and didn’t compete for roughly 8 years until February 2020. He returned to the sport in a big way, posting a 49.91 at a meet in Calgary, Alberta, positioning himself as a potential contender to the 2020 Canadian Olympic squad.

When the Tokyo Games got delayed by a year a few weeks after his comeback, Hayden decided to continue pursuing a 4th Olympic appearance, ultimately qualifying for the meet. Hayden won the 50 freestyle at Canadian Olympic Trials with a 21.82 but withdrew from the 100 freestyle final due to back pain.

In Tokyo, Hayden was the highest finishing man, individually, when he placed 9th overall in the 50 freestyle with a 21.82. He and Kliment Kolesnikov tied for 9th event during semi-finals and were just 0.04 seconds slower than 8th place finisher Thom de Boer.

Hayden also raced for Canada on the 4×100 freestyle relay, blasting a 47.99 opening split, which, at age 37, made him the oldest man in history to swim under 48 seconds. Canada went on to place 4th overall in that event, missing the podium by just 0.60 seconds. For his performance in Tokyo, Hayden was named Male Athlete of the Year by Aquatics Canada.

Hayden’s back pain didn’t prevent him from racing at the Olympic Games but did return a few months later as he was racing for the Toronto Titans in the International Swimming League. After racing in the first few meets for his team, Hayden announced that he would withdraw from the remainder of the season. The Toronto Titans finished 7th overall in the league during their debut 2020 season, but improved during 2021, ultimately placing 5th overall in 2021. After a strong string of performances early on in 2021, the Toronto Titans wound up losing a number of athletes at different points due to injury including Hayden, Jay Lelliott, Blake Pieroni, and Cole Pratt.

Now that he’s back in the pool, if Hayden can get back to where he was this summer, he should have no trouble continuing to represent Team Canada internationally. Hayden’s 50 freestyle time of 21.82, which he produced both at Olympic Trials and the Olympic Games in 2021 is the second-fastest time in Canadian history, behind only his own 2009 swim of 21.73. The next fastest man (other than Santo Condorelli, who no longer represents Canada) is Josh Liendo with a 21.90 from Olympic Trials. Hayden and Liendo are the only active Canadian men who have been under 22 seconds with Yuri Kisil following with a 22.02 from 2018.

Considering that Hayden is still atop the Canadian field in the 50 freestyle and recent Short Course Worlds medalist Josh Liendo is the only one approaching, it remains possible that Hayden could qualify for the upcoming long course World Championships in May 2021. With only two and a half years to go until the Paris 2024 Games, a 5th Olympic bid does not seem out of reach for the evergreen Canadian sprinter.

The best part of statements like this is how un-fake-able the walk the walk part is.

He’ll either throw down the times or not. I’m certainly rooting for him.

I don’t know a whole lot about this but my only major concern for Hayden is that he could have a back spasm during a major meet like LC worlds (even though it happened this year) and have to pull out of the rest of the meet. I just wished his back wasn’t a major issue for him.

In my dreams, Condorelli comes back to Canada in shape at 47.00 relay split… that would be a MEAN relay. Would precisely tie the World Record at 3:08.24, in fact.

And those of you who know anything about Men’s Canadian swimming know a good men’s relay would be quite a sight to behold lol.

I changed my whole comment because even with his 47.90 split from the prelims, Santo would help Canada to get the 4th place. I’d love to see him as a part of the Italian’s final relay and not just prelims

Have you seen his Instagram? He’s an animal in the gym looks in good shape now

He put on too much muscle for Tokyo and was just too heavy in the water. Looked like he was 200+, and was visibly much slimmer in Rio. His stories indicate that he’s cutting weight, and he posted a photo on his story that showed he was in the 180-range. I heard he was taking the year off from competing, so we’ll probably have to wait until later this year to see how he looks.

I don’t follow this comment(s)…?
He just went 21.8 and 47.9 at 38 years old…at the Olympics… It is/was remarkable. He’s at the strength and weight he should be, or as close as he could possibly get with hard work and intelligent training for a man his age.

They were talking about Santo Condorelli, not Brent Hayden.

My bad… Misread that… Fair assessment then.

Wonder who will coach him with Tom retiring