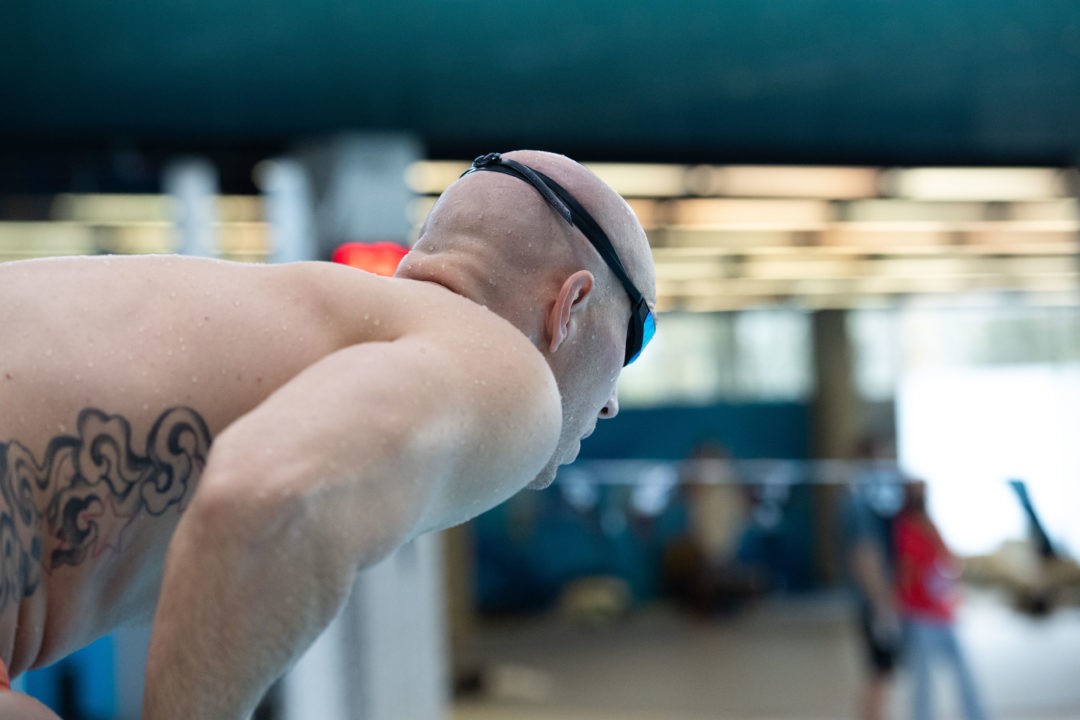 After qualifying for the Olympic team in the 50 freestyle on night 3, Brent Hayden has decided not to swim the 100 freestyle final. Archive photo via Mike Lewis/Ola Vista Photography

After qualifying for the Tokyo 2020 Olympics in the 50 freestyle on day 3 of the Canadian Olympic Swimming Trials, Brent Hayden has scratched from the 100 freestyle final, forgoing the opportunity to qualify individually for the event in which he won a bronze medal at the 2012 Olympics.

Hayden swam a 50.09 during the prelims for 8th overall and posted on Twitter that his “body and particularly [his] back are just not particularly feeling it.”

Sometimes the right decisions are the ones that hurt the most. Thank you everyone for all the love you have sent me over the last 24 hours. I am sorry I can't give you one more swim tonight. pic.twitter.com/cxDplnh7kT

While Hayden was only 8th in the prelims, he would have likely been a contedner for the title if he was in full form, having posted a 48.47 just last month which is under the FINA A of 48.57 and would have given him second place in the prelims behind Yuri Kisil‘s 48.43. Hayden is also the Canadian record holder in the event, holding a 47.27 from the 2009 World Championships in Rome.

Despite Hayden dropping out of the final, we can still expect an exciting race for the 2 individual spots and 4 relay spots that are up for grabs and in the event.

Yuri Kisil and Ruslan Gaziev came back hunting in the men’s 100 freestyle during day 4 prelims at the 2021 Canadian Olympic Swimming Trials. Kisil and Gaziev represented the only 2 sub-49 swims of the session as Kisil posted a 48.43 for the top finish and Gaziev followed with a 48.92 for second.

Gaziev on the other hand was a little bit over the FINA A standard but managed to hit a new PB, improving upon his previous 48.38 from back in 2019. That swim was Gaziev’s first time under 49 seconds in the event and ties him for the 6th fastest Canadian man in history.

Both of them will be fighting to get on the Canadian Olympic team during the finals session, having both missed qualification in the 50 freestyle on day 3.

Gaziev on the other hand was a little further off and swam a 23.08 for 12th, missing the final altogether. Gaziev’s 2017 best time of 22.46 would have placed 4th behind Kisil in the final.

As Kisil and Gaziev fight for redemption in the 100 freestyle final, they won’t be without fierce competition. Olympic-qualified swimmers Josh Liendo and Markus Thormeyer will be coming into the final with a 49.24 and 49.34, respectively.

Both Liendo and Thormeyer have been quicker than that and are the 8th and 5th Canadian men, respectively. In addition to his 50 freestyle qualification, Liendo added his name to the Olympic roster in the 100 butterfly on day 1 while Thormeyer has qualified to swim the 100 and 200 backstrokes.

Another 2 races that will go down during day 4 finals are the men’s and women’s 200 butterflies. During the heats, Canadian record holder Mack Darragh took top seed for the men with a 1:59.11 while Mabel Zavaros notched a 2:11.31 to lead the women’s field.

I hope they can get him healed up for the Olympics in just over a month. The good thing is that since he already qualified yesterday, they can use him on the 4×100 if he’s good to go.

Welcoming Brent Hayden and Simone Manuel to the class of 2021

I’m guessing since he has made the FINA A cut previously, if noone else gets under tonight he could be slotted into the second spot at the Olympics if he is healthy enough in Tokyo

Hopefully 2 gents go under the A standard tonight! Barring that then if Kisil is the winner, both he and Brent should get 100 Ind spots based on SNCs 5th criteria using times from the Q period, including Hayden’s time trial last month and Kisil today. Of course Brent may decide his best course of action is the 50 only and relay duty if needed.

Well… we ALMOST had 4 Canadian guys go 48.xx in one race for the first time in history. Who knows, could still happen if Thormeyer and Liendo step up tonight. Still, one hopes that Hayden will still swim in the Tokyo relay given that he has the FINA A cut for this year.

There’s a good chance it’ll happen tonight. Thormeyer and Liendo were very conservative on the first 50 this morning with 24.3 and 24.1.

wAs HiS BaCk ReAlLy HuRtInG hIm? ExCuSeS….

He already struggled with back pain during his precedent carreer

ShUt the F uP anD gO hOmE…. and he’s 37… not may 37 yr olds can accomplish a multi day multi event schedule at the best of times….

I think canada will add him on the relay anyway