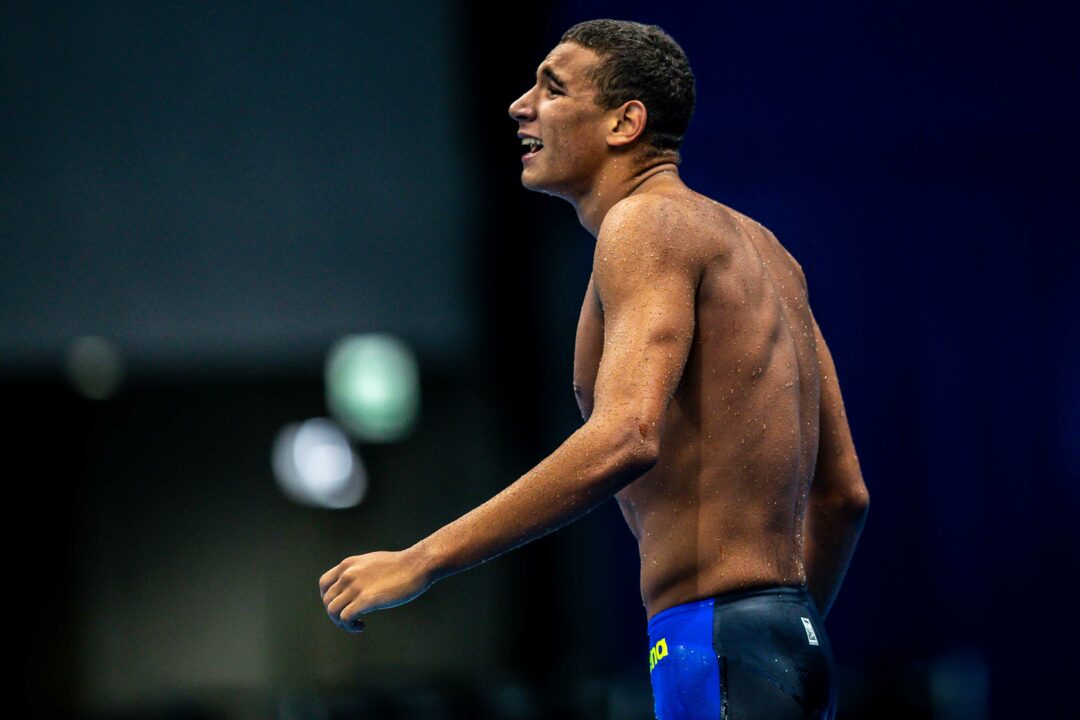 The last time Hafnaoui raced at Short Course Worlds, he placed 19th overall in the men's 400 freestyle and 17th in the 1500. Archive photo via Jack Spitser/Spitser Photography

As countries continue to reveal their respective rosters for the upcoming 2021 Short Course World Swimming Championships, another big name has been added to the field in the form of Olympic gold medalist Ahmed Hafnaoui. Arab News reported recently that Hafnaoui will race at the meet, which will be held in the United Arab Emirates from December 16 – 21.

Hafnaoui recently rose to international swimming stardom at the Tokyo 2020 Olympic Games where he delivered a 3:43.36 to earn a gold medal. Hafnaoui pulled off one of the biggest upsets of the meet, having been entered in 16th place in the 400 freestyle with a 3:46.16 and qualifying for the final by only 0.14 seconds. He was 8th in the prelims with a 3:45.68, just ahead of Switzerland’s Antonio Djakovic who notched a 3:45.82.

In the final, Hafnaoui dropped more than 2 seconds from lane 8 to beat out silver medalist Jack McLoughlin (3:43.52) and bronze medalist Kieran Smith (3:43.94).

This meet will represent Hafnaoui’s first high-level meet since the Olympics and will give him an opportunity to improve upon his results from his last short course Worlds performance. Back in 2018, Hafnaoui raced for Tunisia in Hangzhou, China where he placed 19th overall in the 400 freestyle and 17th in the 1500 freestyle. Notably, his time in the short course 400 freestyle of 3:45.98 back in 2018 is slower than both his prelims and finals swim in the long course version of the event at the Olympics.

In the wake of his Olympic success, 18-year-old Hafnaoui announced that he will be making the move to the United States to begin his collegiate career at Indiana University. He is expected to make the move for the Fall 2022 semester. While he will likely make an immediate impact for Indiana based on his long course performances, his swims at Short Course Worlds will give a better indication of how competitive he will be in a short course pool.

Excited to see him swim, one of the biggest surprises from these Olympics but also one of the best

Big catch for the Hoosiers

still scratching my head what happened to Elijah Winnington in that Olympic race ..

My only guess would be that his second taper didn’t go as well as he hoped it would, because let’s make things clear, if there is one country that I can confidently say you need a full taper to even have a shot at a spot is Australia in the men’s 400, for God sake, they left a 3:43 at home, that’s just unheard of anywhere else except for the US during the Phelps and lochte era

Both Winnington and Mitch Larkin underperformed to me .. taper issues for both perhaps

Pretty sure Larkin has moved clubs since olympics or plans too. Could be issues in prep?

He’s pretty quiet on social media compared to some others .. both coached by Boxall I think

he moved to chandler as per results central

Interesting. That’s what I heard.

Mitch Larkin and “underperforms” is not exactly unusual.

A few world championships and silver medal at the Olympics is not too bad.

I was just stating what Seebohm told me.

Morozov and Proud have both won world championships.

Morozov only won short course worlds. Larkin won two golds in long course in 2015.
Morozov and Proud have no individual Olympic medals, while Larkin has one.

The difference is Larkin actually had the LCM talent to win multiple Olympic golds and be the backstroke star of his generation. He just didn’t have the stones to do it.

What makes you think I wasn’t calm?

1
0
Reply
"I was watching Squid Game"

I think he’ll do really well

1
-29
Reply
DMacNCheez
Reply to  "I was watching Squid Game"

Did you get a massive cramp writing him off so quickly?