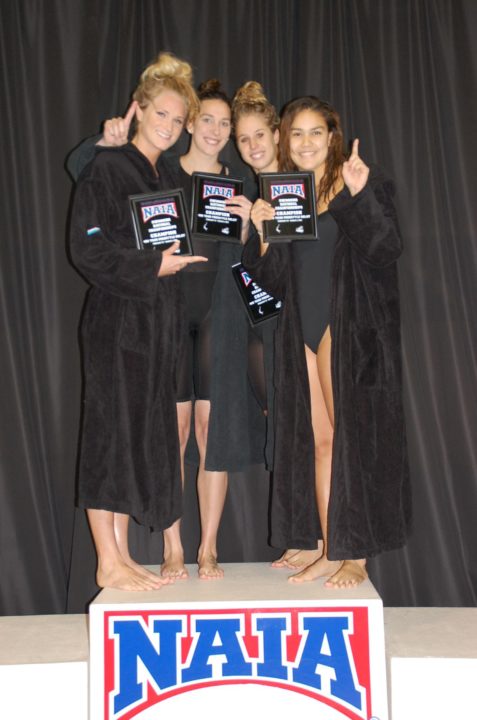 The women of Oklahoma Baptist finished a great meet with a win in the 400 free relay. (Photo Courtesy: Anne Lepesant)

Many, many thanks one more time to Anne Lepesant for covering NAIA Nationals for us all week in Oklahoma City. Her tireless efforts have shone a positive light on a very important section of our sport.

The last session of the NAIA National Swim & Dive Championship in Oklahoma City promised excitement and did not disappoint.

The evening began with a parade of athletes and senior tribute that turned into a massive Harlem Shake, getting everyone–swimmers and fans alike– ready for the excitement to come.

SCAD Savannah dominated the women’s individual swims with three wins and three second-place finishes in the five events. Oklahoma Baptist took the other two golds and had two bronzes. The rest of the podium steps were filled by athletes from Biola, Brenau, Concordia, Cumberlands and Olivet Nazarene.

Top-seeded SCAD freshman Caroline Lepesant turned first at the 50 and never looked back. Her teammate, defending champion in the event, Heather Librizzi was right on her shoulder through the 1000, when Lepesant began to pull away. The pair finished 1-2, touching in 17:05.79 and 17:12.81, slightly off their respective season best times. Cumberlands’ Grace Van Ryckeghem finished third in 17:22.15.

Olivet Nazarene’s Andrew Fischer, another freshman, made it a clean sweep of the distance events by winning the mile. Fischer bettered his seed time (which had been Olivet’s school record) by 37 seconds, clocking a 15:44.71. Second place went to Biola’s Eric Sirjord, another freshman with an impressive drop: his 15:57.42 finals swim was 29 seconds faster than his season best, and good enough for his school record as well. Connor Wilson of Oklahoma Baptist placed third in 16:08.88. He trailed Asbury’s Daniel Bowman the entire race but finished with a smoking fast bell lap to end up with the bronze. Who knew the mile could be so exciting?

Excitement continued to build in the crowd as SCAD’s freshman Hannah Legg, who had won the 400 IM the previous night, took to the pool to claim her second win of the meet. Teammate Kelsey Bobzien in lane 5 was out first and led by .16 at the 150. The pair turned together at the 125 wall and the crowd was on their feet. In the end Legg prevailed with an impressive charge to the wall. She took her second national title in 2:01.67. Bobzien went 2:01.89 to claim second, and Ines Remersaro of OBU was third in 2:03.03. Both Legg and Bobzien were under the SCAD record, previously set by Bobzien.

The men’s race was no less exciting, but no photo finish was necessary to determine the winner. Defending champ and national record-holder, SCAD’s Ryan Searles, broke away from the pack at the 100 and built his lead to cruise to a 1:47.84 finish for the national title. Andrew Nelson of OBU and Zach Johnson of Cumberlands were second and third, 1:50.05 to 1:50.46. Johnson’s swim lowered the Cumberlands record by 2.1 seconds.

There were no real surprises in the night’s sprint freestyle, just a slight reshuffling of the deck. OBU’s Lady Bison were seeded 1-2-4-5 after prelims and finished 1-3-4-5 in finals. Laura Galarza won her third national title, having also swept the 50 and 200 frees, in 50.29, only .13 off the meet record. It was an impressive end to a great meet for Galarza. SCAD freshman Haley Thompson moved up a spot from her prelim finish and took silver in 52.08. OBU’s Emma Forbes-Milne rounded out the podium in 52.32.

Daniel Ramirez of OBU stepped up to the blocks ready for business. With two victories (100 back, 200 IM) and a meet record (100 back) under his belt already, he was fired up to break another meet record en route to his third title. With the crowd on its feet cheering him on, Ramirez made it a hat trick and got his record with a 43.42 finish. That erased David Hibberd of Simon Fraser’s 43.94 set in 2011. Nick Shuttinger of OBU, who had broken the 50 free record earlier in the meet, finished second in 44.42. Biola’s Chris Stutzman was third in 44.76, and in the process lowered his own school record by four-tenths.

100 breast champion Kerryn Mullin of OBU won her second event of the meet, way ahead of the field in 2:19.67. Concordia’s Kylie Fortier was second in 2:23.34 and Sydney Harris of Olivet Nazarene came in third at 2:25.08. Harris’s swim absolutely smashed the ONU school record.

Vitor da Franca, OBU’s breaststroke specialist who had previously won the 100, prevailed in a much tighter contest than the women’s race. It was exciting from start to finish, with the middle four lanes very tightly bunched. In the end da Franca touched first in 2:00.98, followed by Union’s Luis Ambrosio Filho with 2:01.31 and OBU’s Greg Penny with 2:02.69. Ambrosio Filho’s swim lowered his own school record by nearly 2 seconds.

In one of the most exciting races of the night –perhaps second only to the 200 back– Hannah Legg of SCAD eked out her third national title in characteristically dramatic fashion. Biola’s Christine Tixier, the NAIA 100 fly record-holder and winner of that event the previous night, took it out quickly, setting the pace. Tixier led at the 50, the 100, and the 150. For the second time that night, the crowd was on its feet to cheer on the excitement playing out in the last 25 yards. Once again, Legg reached down deep and got herself to the wall first in 2:03.33, setting yet another SCAD record. Tixier swam a tough race but wound up second in 2:03.43, lowering her own school record. Hannah Boudreaux of Brenau made her third trip of the meet to the podium, picking up a bronze this time with her 2:04.04 finish. She, too, lowered her own school record with that swim.

There was a lot less drama in the men’s race, as Maximiliano Abreu of OBU cruised to an easy victory in 1:47.26, avenging his third-place finish in the 100 fly. Just behind him, Aaron Buchanan of Olivet Nazarene and Mark Shvartsman of SCAD were neck and neck fighting for second. Buchanan’s strong final 50 gave him the edge, and he finished with the silver in 1:50.36 with SCAD’s Shvartsman just behind in 1:50.85. Shvartsman’s swim was still fast enough to better his own SCAD record, while Buchanan’s lowered his school record by six seconds!

All eyes were on the Oklahoma Baptist women’s and men’s 4×100 free relays as they were both gunning for meet records. Given their individual swimmers’ performance in the meet’s sprint events it was within reach, and the crowd was ready for it.

The Lady Bisons pulled off a stunning race, getting it done to the roar of the home crowd. OBU star sprinter Laura Galarza led off with 51.07, and Emma Forbes-Milne (51.67), Lisa MacManus (50.94), and Nicole Wilson (51.95) each increased the lead on the field as the fans got louder with anticipation. When Wilson touched the wall all eyes turned to the scoreboard. The Lady Bisons’ 3:25.63 erased Fresno Pacific’s 2012 mark by .18. SCAD’s Haley Thompson, Fanny Varga, Kelsey Bobzien and Heather Partlow took second in 3:21.22, a full 8.4 seconds under SCAD’s previous record. In third place were Hannah Boudreaux, Meredith Barrington, Mary Katherine Jabbia, and Michelle Billeaud of Brenau. Their 3:33.77 lowered their school record by 1.8 seconds.

With one meet record down and one to go, the Oklahoma Baptist men stepped up to the blocks. They were way out front the entire race and the entire pool was on its feet. Just like in the women’s race, all eyes turned to the board at the touch. But this time there was a big D. OBU would be denied its last meet record. In a very tight finish, Concordia took the gold in 3:03.87 with Kevin Donnelly (45.93), Lucas Spencer (46.37), Parker Simmons (45.17) and Cody Ditsler (46.40). Olivet Nazarene’s Andrew Fischer, Kasey Foley, Calvin Price and Simon Pheasant were second in 3:04.12, destroying their school record with a 7-second drop. Biola broke a record of their own, with Nick Steadman, Austin Sarna, Brandon Hughes, and Chris Stutzman’s 3:04.49 third-place finish.

Men’s Coach of the Year – Eric Skelly of the Cumberlands.

Women’s Coach of the Year – Chris Conlon of SCAD

Men’s Swimmer of the Year – Daniel Ramirez of Oklahoma Baptist

Women’s Swimmer of the Year – Laura Galarza of Oklahoma Baptist

Men’s Diver of the Meet – Ian McNair of Illinois Tech

Women’s Diver of the Meet – Kristen Brimage of Oklahoma Baptist

Men’s Swim of the Meet – 100 back, Daniel Ramirez of Oklahoma Baptist

Women’s Swim of the Meet – 100 back, Lisa MacManus of Oklahoma Baptist

The NAIA Championship has been around since 1957 for the men and 1981 for the women. It is growing in depth and speed every year, and provides a wonderful opportunity for hundreds of athletes to continue to compete in college. For more information, read “A Coach’s Perspective” by SCAD coach Chris Conlon. http://www.naia.org/ViewArticle.dbml?DB_OEM_ID=27900&ATCLID=205364578