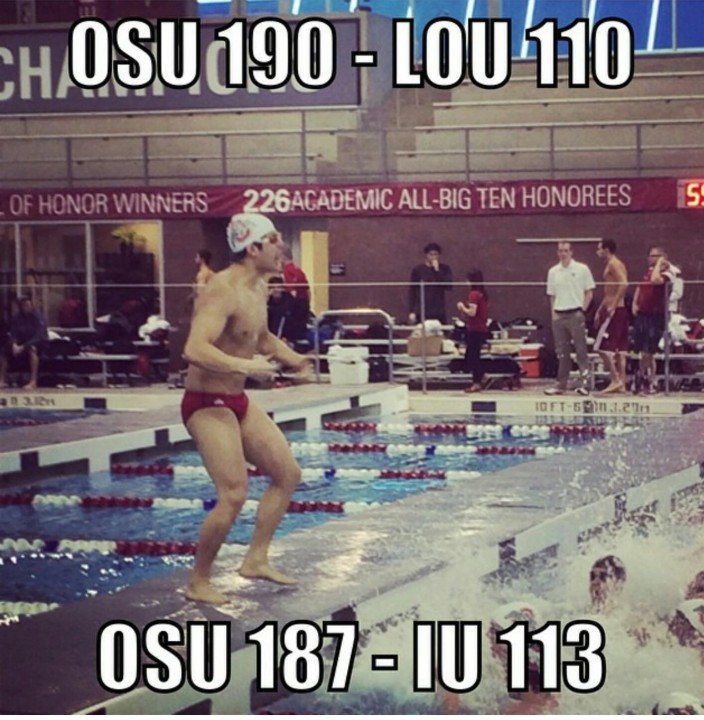 The Ohio State men's squad celebrates as they take down the #4 and #9 ranked teams in the country. Current photo via Courtesy of Ohio State Men's Swimming Instagram

With the University of Louisville’s (men) recent fourth place CSCAA ranking, along with Indiana University’s (men) ninth position in that same poll, it would not have surprised anyone for both to teams to travel to Ohio State University’s McCorkle Aquatic Pavilion and pull out team victories against the Buckeyes.  However, from the first event, it was clear Ohio State certainly had plans of their own to celebrate their team’s Senior Day, as the Buckeyes stunned both the Cardinals and Hoosiers, pulling off the unlikely upset on both accounts.

OSU bookended the meet by raking in major team points with wins in both the 200y medley and 400y free relays, while earning ten individual swimming event victories in between.  The Buckeyes were simply able to capitalize on their depth and put it to work against the key powerhouse swimmers stacked on both visiting teams.

The Buckeyes were able to top Louisville ace Grigory Tarasevich in both backstroke distances, with Matt McHugh claiming the 100y victory (47.71) and Steve Zimmerman stepping up to top the field in the 200y event (1:45.49).  Ohio State’s Ching Lim was also able to pull off the win in the 200y IM, battling Louisville’s Nolan Tesone and out-touching him by just three tenths – 1:48.44 for Lim, 1:48.77 for Tesone.

OSU’s McHugh also carried the win in the 100y butterfly, touching the wall half a second ahead of the field in a swift 47.84; a time not too far off his season bestof 47.49 from October. Teammate Tamas Gercsak then had his turn on top of the scoreboard for the Buckeyes, winning the 200y butterfly in a time of 1:47.21.
Ohio State sprinting star Josh Fleagle was able to shut down Louisville’s primary fast-twitch weapon, Caryle Blondell, in both the 50y and 100y freestyle distances, winning in 20.08 and 44.24, respectively.

Ohio State’s distance sensation Brayden Seal also kept the team’s momentum going by pulling off the win the 500y freestyle (4:26.99), after having been overtaken earlier on the last length in the 1000y race by Louisville’s Marcelo Acosta who won that event in 9:06.89.  Acosta now holds the 1000y freestyle pool record for his efforts.

The Louisville breaststroking fortress, typically sweeping that discipline’s events in a single meet, was not as dominant today.  Senior Thomas Dahlia was able to walk away with the win in the 100y breaststroke (54.46), but the usual suspects to surround him – Addison Bray, Carlos Claverie – were found a bit further down in the finish list in fifth and sixth place, respectively.  The 200y looked a bit better for the Cardinals with Dahlia clocking a 1:59.92 for the win with Claverie clearing up in third in 2:01.86.  But, it was OSU’s DJ Macdonald in between them in second place (2:00.61) to earn some important points.

Indiana’s only individual win came in the form of Blake Pieroni’s 200y freestyle victory (1:36.33) to narrowly finish ahead of charging Louisville talent Trevor Carroll (1:36.79). Michael DiSalle raked in a few points as the top finisher for OSU with a third place time of 1:37.81.

The Hoosiers were able to make up some point deficits with their outstanding diving contingent of Michael Hixon and James Connor, who finished first and second in both the 1 meter and 3 meter diving events to help keep the meet close with Louisville.

Thank you for the heads up! At the time of publication (and still) Meet Mobile only includes first heat and the online results at the time were stagnate on psych sheet. With full results now available, the article has been corrected.