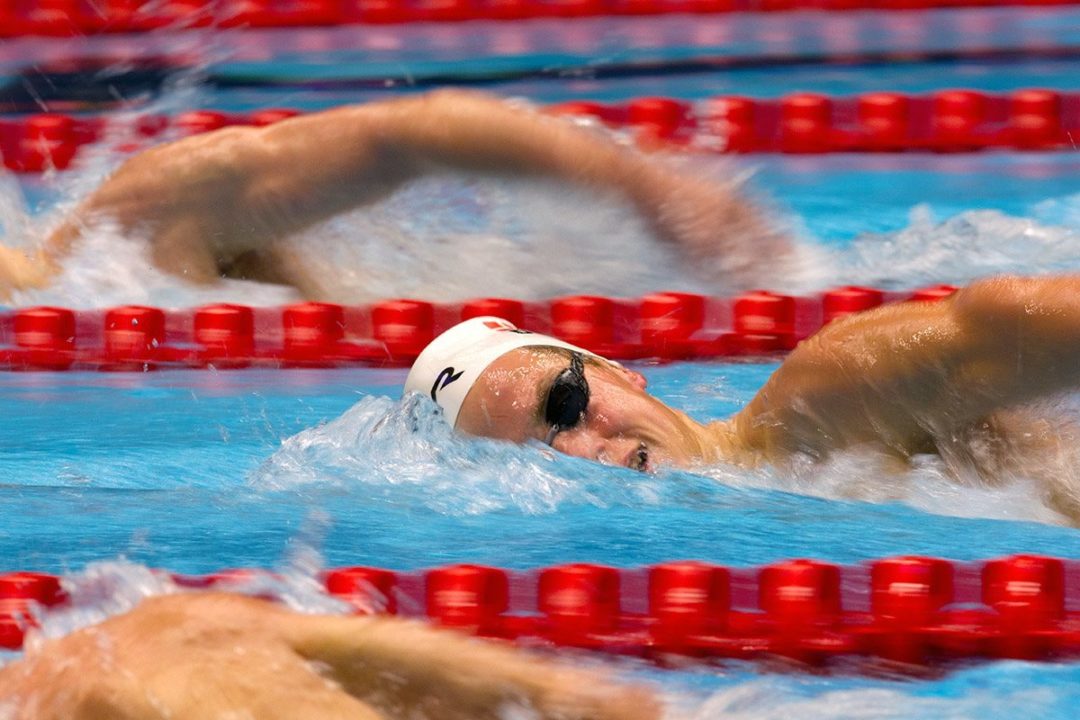 North Carolina, a team who is coming off of a dominant win over the Virginia men and a big upset of the then-#6 UVA women, split their dual with in-state opponents NC State. The #5 Tar Heel women rolled on, taking down #12 NC State 155.5-144.5, as the #8 Wolfpack men dismantled #18 UNC with a final score of 180-118. The NC State men cap off their dual meet season UNDEFEATED.

The Wolfpack snatched a win away from the Tar Heels in the opening medley relay, as Riki Bonnema ran down UNC’s Ally Hardesty, 22.17 to 22.70, to win in 1:40.49, just ahead of UNC (1:40.53). Hellen Moffitt had an excellent lead off for the Tar Heels, touching in 25.01, although it was not enough, as the Wolfpack edged UNC on the next three relay legs.

The Tar Heels struck back, however, taking the next three events. First it was Emma Nunn in the 1000 free, touching over three seconds ahead of NC State’s Rachel Muller with a winning time of 9:54.49. Muller finished under ten minutes also, clocking a 9:58.09.

This was a close meet however, and NC State matched the Tar Heels with wins in the sprint freestyles and breaststroke events. Bonnema and Lauren Poli snagged 1st and 2nd rapid-fire, touching in 22.97 and 22.98, respectively. Labonge, who touched 2nd in the 200 free, won the 100 free (50.46) as Hardesty of UNC and Bonnema of NC State managed to tie for 2nd in 50.61. Kayla Brumbaum flew past the field in the 100 (1:01.88) and 200 breaststroke (2:15.87) without anyone coming threateningly close in either. She broke the pool record in the 100 breaststroke.

Addisynn Bursch took the 200 IM (2:01.44) for NC State (with a pool record), which carried momentum into the 400 free relay, as they toppled UNC, 3:19.37 to 3:22.29. Unfortunately for the Wolfpack, that marked the end of the meet, and North Carolina came away with another big win. NC State did, however, shatter another pool record in this event. Diver Rachel Mumma won the 1 meter diving with a score of 322.32 to break the pool record and her own school record.

“It was a great battle, and even though our women came up short it was a great competition all around. We knew our women had a chance win today, but despite the loss we still had some big performances today and we look forward to continuing to progress and move into ACCs and NCAAs.” –Head Coach Braden Holloway

The NC State men were absolutely relentless against North Carolina. Not only did they win all but one event, but the Wolfpack went 1-2 in 5 individual events and 1-2-3 in an additional 2 individual events.

The highlight of the meet was Anton Ipsen‘s school record breaking 1000 free after NC State dominated the 200 medley relay with a pool record. Ipsen, who broke his personal best as well as the Casey Aquatic Center pool record last weekend against Minnesota in this event, shaved off more than three seconds to break his personal, pool, and the school records all in one fell swoop. He touched at 8:55.70, and is now the 2nd fastest 1000 freestyler in the country this season behind Tennessee’s Evan Pinion. Ipsen continued to impress with a 4:19.97 to win the 500 free by just over nine seconds and (you guessed it) broke the pool record.

Held, who was 20.02 in the 50 and 43.70 in the 100, nearly hit a lifetime best in the latter event, which is fairly uncommon for sprinters, ESPECIALLY in dual meet season. Held looks to contribute big time to the renowned Wolfpack relays as they head into championship season.

In the 400 free relay, no NC State swimmer on the A relay swam above a 43.8, which is pretty mind-boggling for a meet in January. The highlight of the relay was Bilis, who popped a 42.53 on the 2nd leg. The Wolfpack won in 2:53.73, nearly five seconds ahead of UNC, taking down yet another pool record.

The Tar Heels didn’t have a bad meet, necessarily, but they simply could not match the ferocity of the Wolfpack. UNC’s Sam Lewis, who had the fastest fly split in the 200 medley relay (20.81), took the 100 fly in 47.44, holding off a charging Soeren Dahl (47.51) and putting up the sole swimming win for the Tar Heels.

“For our men it was a good team victory and great team effort. They came into today ready to go and were hungry to take on the Tar Heels. UNC’s a good team and our men were able to get ahead of them early and capitalize on our lead.” –Holloway

This meet marks the final dual meet for both teams, as they head into championship season, beginning with the women’s ACC Championships starting Wednesday, February 18th.

Man, NC State has been impressive. I think their 400 free relay can place seriously high at NCAAs

mmmhhh… they were 3rd last year!

Or…. they could win

Now that NC State has rested for a couple of meets it will be interesting to see how they taper for ACC.

I don’t know about ‘rested’. The coaching staff at NC State know what they are doing! Take a look at their results from last year.

As UNC fan, it was hard to watch NC State men dominated our men. But kudos to Braden Holloway and the staff!

Not sure why you think they’re rested. They pretty much swim through the dual meet season unlike a lot of teams that do the whole taper, shave and suit thing in December. There was one State swimmer in a suit yesterday (200 back,Coetzer I think, coulda been Camper), maybe 1 or 2 Heels in suits, the rest of both teams were in regular speedos. They will be rested for the ACC and NCAA meets.

SWIM DUDE, I watched the NC State vs. UNC swim meet. NCState was not shaved or rested. All the guys had beards and hair and as someone has said here (in so many words) already, the coaching staff is excellent and would not sacrifice a small dual meet victory for a conference championship or high finish at NCAAs.

Ryan Held is on his way to greatness in this sport. Olympic greatness.

Held’s start is absolutely amazing, at least it was on Saturday and the other time I saw him swim at Y nationals.

Oops! Yay Addyson, not Allison. Sorry for the typo.

If you’re unfamiliar with Casey Aquatic Center’s pool, it’s built perpendicular to what might make sense. Meaning, that instead of being shallow at the turn end, it’s shallow in lane 1 and deep in lane 8. Ipsen swam his 8:55 in lane 3 in about 4 feet of water!

Yea, great point Eddie! I was thinking the same thing–that Ipsen swam that 8:55 in 4 feet of water! Scary what he’ll go in ideal conditions.

NC STATE both boys and girls team did a great job!!!!!
These kids have worked very hard!!!!