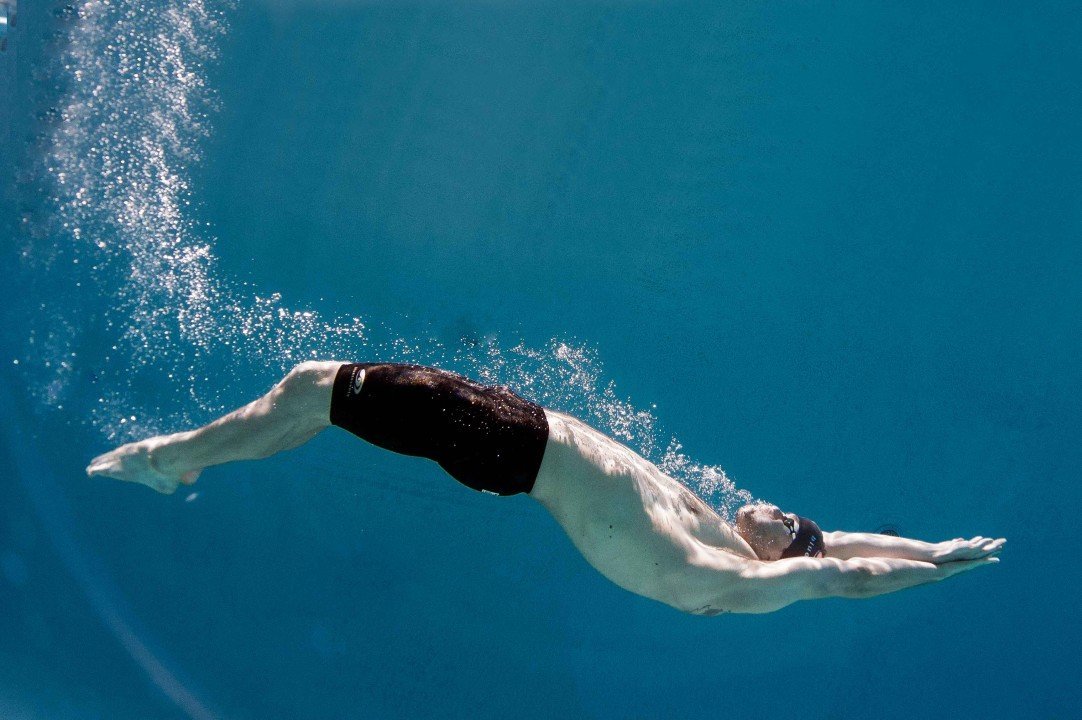 A written interpretation of the rule was distributed to officials at last week's FINA World Junior Championships, giving some insights into what the exact language of the new interpretation will look like when it is submitted later this year. Stock photo via Mike Lewis/Ola Vista Photography

FINA has made it clear it plans to officially clarify the interpretation of underwater kicking rules within IM races, and we’ve got a blueprint for what the new interpretation might look like.

SwimSwam has learned that a written interpretation of the rule was distributed to officials at last week’s FINA World Junior Championships, giving some insights into what the exact language of the new interpretation will look like when it is submitted later this year.

Some background: U.S. star Ryan Lochte began using a new underwater kicking technique this summer, staying on his back for all of his underwater kickouts on both backstroke and freestyle.

But at the FINA World Championships, rumblings began that Lochte could be disqualified for his new technique in IM races, if officials interpreted underwater kicking on one’s back as technically “backstroke” – swimming backstroke on the freestyle portion of an IM is illegal.

Lochte won the 200 IM without a DQ, but said after the race he believed the rule would soon be changed.

According to SW 9.1 each of the strokes must cover one quarter (1/4) of the distance.

Being on the back when leaving the wall for the Freestyle portion of the Ind. Medley is covering more than one quarter of the distance in the style of Backstroke and is, therefore, a disqualification.

Backstroke swimming is only defined as being on the back.

“except that in individual medley or medley relay events, freestyle means any style other than backstroke, breaststroke or butterfly.”

There are specific stroke and kick requirements.

There are specific stroke and kick requirements.

I told my son about the rule and as a swimmer,he told me there will be potentially more injuries if we don’t figure out an alternative way to do the flip turn. Like Swimfl said above, as you complete the breast or other strokes, his preferred way for the flip turn is toes up. If the swimmer has the toes up and try to turn and twist the body on to stomach, it will take a lot of work and pain to turn the body. If not careful, you can easily hurt your back. Frankly it may be better to get the DQ than not able to swim in my opinion! I hope FINA will seriouly consider all the inputs… Read more »

Just wait until someone kicks really fast on his/her side and FINA will change the rules again. Then everyone will have to kick on their stomach for free and fly / back for backstroke only.

I understand the legalities of underwater on your back in an IM. Does it apply to a straight freestyle race as well where turns are involved? May you do the underwater work on your back?

But still no news on tightening up the rules so breaststrokers can’t take 3 dolphin kicks off the start and still not be DQ’ed?

Most of the comments made here are about the rule itself. Has anyone TRIED to NOT be “past vertical toward the back” off of a freestyle flip turn when flipping straight over (not leaning legs to one side). I tried it this morning. I’m a USA stroke and turn official and I disqualified myself 100% of the time because the instant that my toes leave the wall, my shoulder was past vertical toward the back. At the end of the workout, I tried to lean, but that turn felt outrageously slow and basically I was turning myself prior to my feet hitting the wall. I hope someone our stroke and turn officials stay as oblivious to this minor detail as… Read more »

SwimFL – this brings up the overlooked question of the whole thing – how does this apply to the middle turn on the 400 IM? Because remember that in the 200 IM, there’s not a flipturn from breaststroke to freestyle, and this interpretation is ONLY relevant in the IM.

And not long before that (OK well quite a while 🙂 ) swimmers used to have to stay on their backs for backstroke throughout the race. At the time I thought it was pretty bonkers to be able to turn onto your front during a backstroke race in order to perform your turn. Given that you can be on your front during a backstroke race it defies logic that you can’t be on your back at all (or presumably even towards your back) when swimming freestyle albeit during the freestyle section of a medley.

I rember during the era before phelps when underwater dolphin kick was a novel concept and ‘less was more’ when it came to suits using summer league to experiment with new racing techniques. One such technique was Dolphin kicking on my back in freestyle. I got dq’ed for this but my mother, the head official over turned this dq. She told me that based on her understanding of the rules freesyle was whatever you wanted except in the IM where it was anything not definitely as butterfly backstroke or breaststroke. She also told me the rules of IM turns were Basically finish like the finish of that stroke start like the start of the following stroke, and despite using that… Read more »