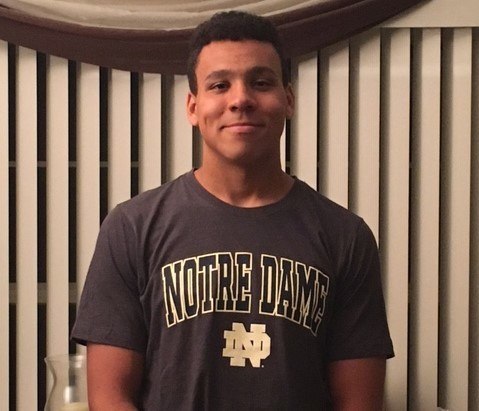 Cason Wilburn (above) won the 100 fly and 200 free for the Notre Dame men as both the men and women swept Pitt and Cleveland State. Current photo via Cassondre Wilburn

Following two weeks of tumult shrouded in mystery following the abrupt resignation of head coach Mike Litzinger and associate head coach Aaron Bell on October 4th and the cancellation of their season opening-dual meet, Notre Dame finally opened their season by welcoming Pitt and Cleveland State to South Bend for a double dual. Notre Dame swept the meet on both the men’s and women’s side, while Pitt won both the men’s and women’s meet against Cleveland State.

Notre Dame has declined to comment to multiple requests from SwimSwam regarding their plan for naming an interim head coach or the status of finding Litzinger’s successor. The Notre Dame team website currently lists Joe Brinkman, Mitch Dansky and Becca Weiland as assistant coaches and Mark Bradshaw as head diving coach, with Brinkman having been listed as this weekend’s meet director.

Notre Dame dominated the men’s meet from the start with a 1-2 finish in the 200 free relay. Notre Dame’s A squad of Chris Giuliano, Cason Wilburn, Luke Uttley and Alec DeLong touched first in 1:21.89, topping Notre Dame’s B team by just .01.

NCAA qualifier Cason Wilburn was one of the stars on the day for Notre Dame, winning all five events that he swam. In addition to winning the 200 free relay, Wilburn also posted the fastest split on Notre Dame’s winning 400 free relay and swam the fly on Notre Dame’s winning 400 medley relay. The Chesapeake, Virginia native also won both of his individual events handily, winning the 100 fly in 47.58 and the 200 free in 1:37.39.

Pitt was led by sophomore backstroker Marcin Goraj, who swept both the 100 and 200 back. The Krakow, Poland native posted a very quick 1:46.60 to win the 200 back early in the meet, going nearly 3 seconds faster than just a week ago at the FIU TYR classic. Goraj later returned to narrowly win the 100 back in 48.97, touching just two tenths ahead of Notre Dame’s Kaden Smesko. Goraj is off to a great start to the season, as his 200 back was less than 2 seconds off what he swam at last year’s ACC Championships, where he qualified for the C final.

Pitt and Notre Dame split the breaststroke races, but both teams posted very fast early season times. In the 100 breast, Notre Dame senior Josh Bottelberghe used a quick opening split to take the win in 53.82, touching just a tenth ahead Pitt junior Jerry Chen. In the 200, however, Chen, a local product from nearby Warrendale, got revenge over the Notre Dame All American, winning going away in 1:58.31.

Notre Dame was dominant in the women’s meet, with All American Coleen Gillilan and high-impact freshman Madelyn Christman leading the way with two individual wins apiece.

Gillilan, a former versatile blue-chip recruit from Fort Collins, Colorado, swept both fly races. She started her meet off by winning the 100 fly by a second and a half in a strong 53.94. She later returned to win the 200 fly in 2:00.76, just barely out touching teammate Emma Gleason by a tenth.

Gillilan has been an All American in both fly events in her first two seasons for the Fighting Irish, but marks a bit of a slower start than in previous seasons. In her freshman year she opened her college career with a 53.32 in the 100 fly, while at last year’s first dual meet she threw down a massive 52.07 and 1:58.93 in the 200 fly, so her results this weekend were slower than either of those openers.

Also starring for the Irish was freshman Madelyn Christman, who won the 200 back and 200 IM. Christman, who swam for the Indiana high school and club powerhouse Carmel, announced her arrival in South Bend in a big way by posting a 1:56.80 in the 200 back. Her best time came in December of 2020 with a 1:54.85. Christman later returned to win the 200 IM in 2:04.22 to sweep her events at her collegiate debut.

Pitt’s lone victory on the day came in the 400 IM, as Daisy Anderson dominated from start to finish to win by over five seconds in 4:20.29. Anderson, a junior from England who represented Great Britain at the 2018 European Juniors, was a B finalist at last year’s ACC Championships in the 400 IM. Her best time came from that swim in 4:15.46.

Notre Dame welcomes in-state rival Purdue to South Bend on Friday for a dual meet, while Cleveland State will host Youngstown State for a dual in Cleveland on Friday. Pitt will take the next couple of weeks off from racing before welcoming George Washington to Pittsburgh on November 6th.

Well done to certified big boi Jerry Chen – his improvement curve has been insane coming out of high school!