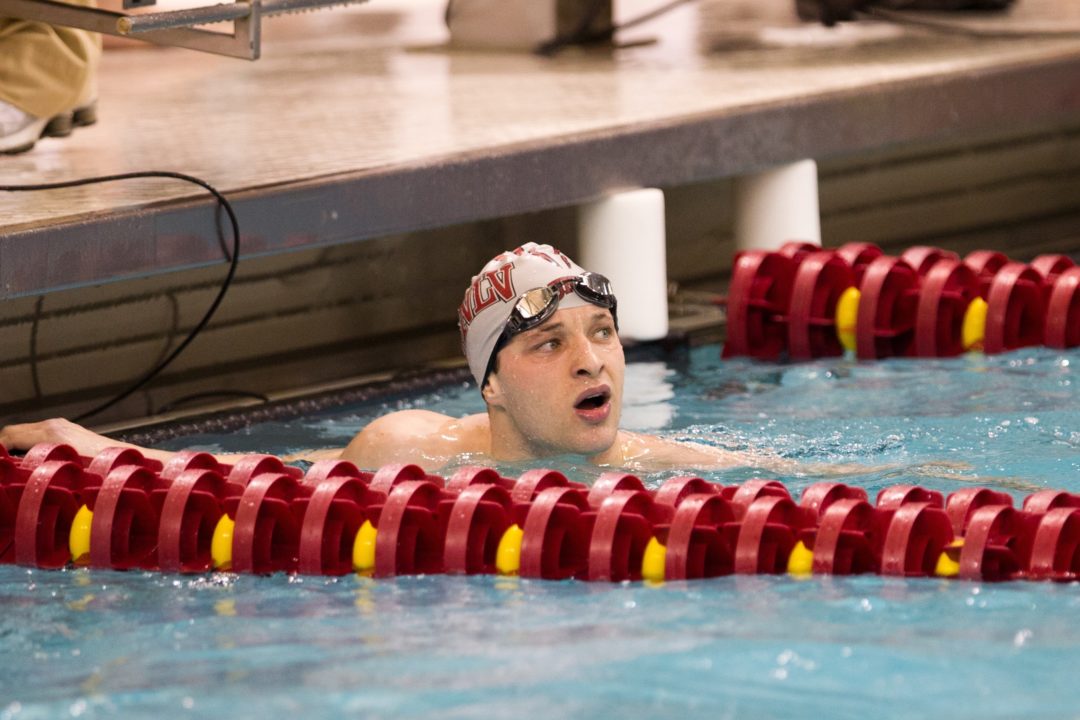 This report was contributed by Mike Thompson, a Canadian swim coach and journalist, who is one of the leading voices in Canadian swimming. Check out his blog at CoachMikeSwim.Blogspot.com, and his weekly Canadian-themed podcast here.
Day 1 of Canadian Summer Nationals and one thing is immediately apparent: The Canadian field at this meet is significantly younger than at the Olympic Trials in Late March. A great deal of the A and B finals were made up of significantly younger swimmers. I believe that due to Olympic Trials in March, many older swimmers that did not make the team took early vacation and/or retirement, which is making room for many youngsters to prove themselves. It also helps that this is serving as the Canadian Junior Pan Pac trials.
Kier Maitland of Edmonton Keyano won the mens 800FR (8:04.15) followed by the Island Swimming combo of Eric Heldin (8:08.32) and Will Brothers (8:09.86). These were significantly ahead of the rest of the field, with Sean Penhale of Cascade in 4th in a time of 8:17.41. Brothers, being 17, will likely be selected for the Junior PanPac Team with that swim.
16-year old Noemie Thomas of Vancouver pulled double duty coming 2nd to Sandrine Mainville in 50 fly by .01 (26.96-26.97) and winning 200 fly in 2:12.59. Thomas looked much stronger in the final 25m than the rest of the field (although dropping by 2 seconds in her final 50 – this may have been only relative). That’s a very strong swim for the high schooler and the 6th fastest time in that age group in Canadian History.
18-Year old Mack Darragh, trained in the United States at Missouri, won the men’s 200 fly in a time of 2:00.30.
The women’s 200 free was won by Brittney Harley of Vancouver (2:02.37), while the mens 200 free was won by Hassaan Abdel-Khalik of Etobicoke (1:49.82), who was followed by Chad Bobrosky and Jeremy Bagshaw (both 1:50’s). Hassaan was challenged by his 17-year old brother Aly, who finished 5th in a time of (1:50.47).
Abdel-Khalik was at the center of a controversy that erupted after the Canadian Olympic Team was announced, with an 800 free relay but without their number three and four finishers from Trials in the 200 free. For him, that nearly matched his time from March’s Olympic qualifying meet. As for Bagshaw, he was hoping for a bit better, in his own words, but that was his first best time in the race since 2009, so a step back in the right direction.
Another face-off between brothers was a race between Jeffery (18) and Matthew (21) Swanston of Newmarket, ON who finished 2nd and 3rd, respectively in the 100BK. Jeffery (55.76), took off almost a full second in his 100BK to finish second to Jake Tapp (55.75), with big brother Matthew finishing 3rd in a time of 55.98. Matthew was 2nd in Olympic Trials in this event. “It was fun having both boys in the final side by side,” said Alan Swanston, the duo’s coach and father, “having both of them come from behind at the end and end up on the podium was great.” They will face off again tomorrow in the 50 back..
Dominique Bouchard of North Bay (and another at the University of Missouri) won the women’s 100 back (1:01.53), followed by Genevieve Cantin (1:01.78) and Lauren Lavigna (1:02.44). It was a tight finish for the women which mostly came down to the final 25 meters.
Full, Live results can be found here: http://results.teamunify.com/cseksc/summernationals2012/