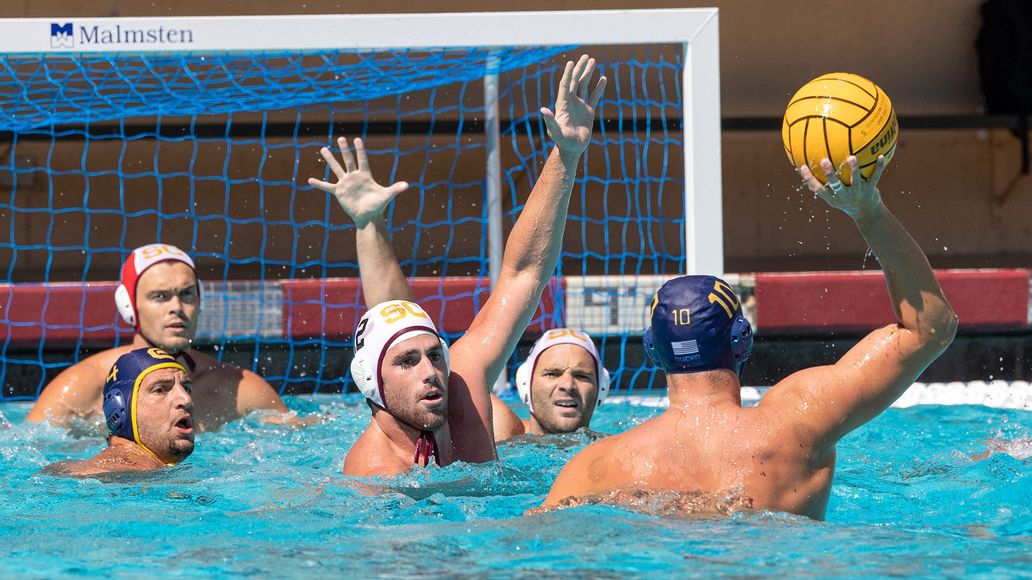 The Bears opened the 2022 MPSF Championships with a big win, defeating Penn State Behrend 22-3 to advance to the semifinal round of the conference tournament. Archive photo via Stewart McGuire

LOS ANGELES, Calif. – The No. 1 California men’s water polo team opened the 2022 MPSF Championships with a big win, defeating Penn State Behrend 22-3 to advance to the semifinal round of the conference tournament.
“It’s a good way to start the tournament,” head coach Kirk Everist said. “It was a good opportunity for our guys to get into the weekend, get used to the environment and get the ball rolling.”Cal’s offense jumped out to an explosive start, scoring four goals in just the first two minutes of play. Sophomore center George Avakian tied the MPSF conference season-high and set a personal career-high of seven goals, adding one block and one steal in the effort. Senior utility player Jack Deely scored a goal and assisted on three for four points, also adding a steal.Junior goalie Adrian Weinberg recorded 12 saves in the game, anchoring a defense that combined for 12 steals and held the Lions to three goals, the fewest of any Cal opponent this season.The Bears will face No. 4 Stanford in the semifinal game tomorrow at 1 p.m. The two teams played in the annual Big Splash last week, and Cal came out on top, 18-12.No. 1 Cal 22, Penn State Behrend 3PSB 1 1 0 1
CAL 10 7 3 2PSB Goals: Jack Holl, Chase Cordon, Ryan KenneyCal Goals: George Avakian (7), Marton Szatmary (3), Jordi Gascon (3), Roberto Valera (2), Joe Molina (2), Jack Deely, Marko Valecic, Nikolaos Papanikolaou, Albert Ponferrada, Garrett DunnPSB Saves: Devin Loackard (3), Leytron Vrono (2)Cal Saves: Adrian Weinberg (12)

* The Lions return to action on tomorrow for their second game of the MPSF Championships, beginning at 12:30 p.m.