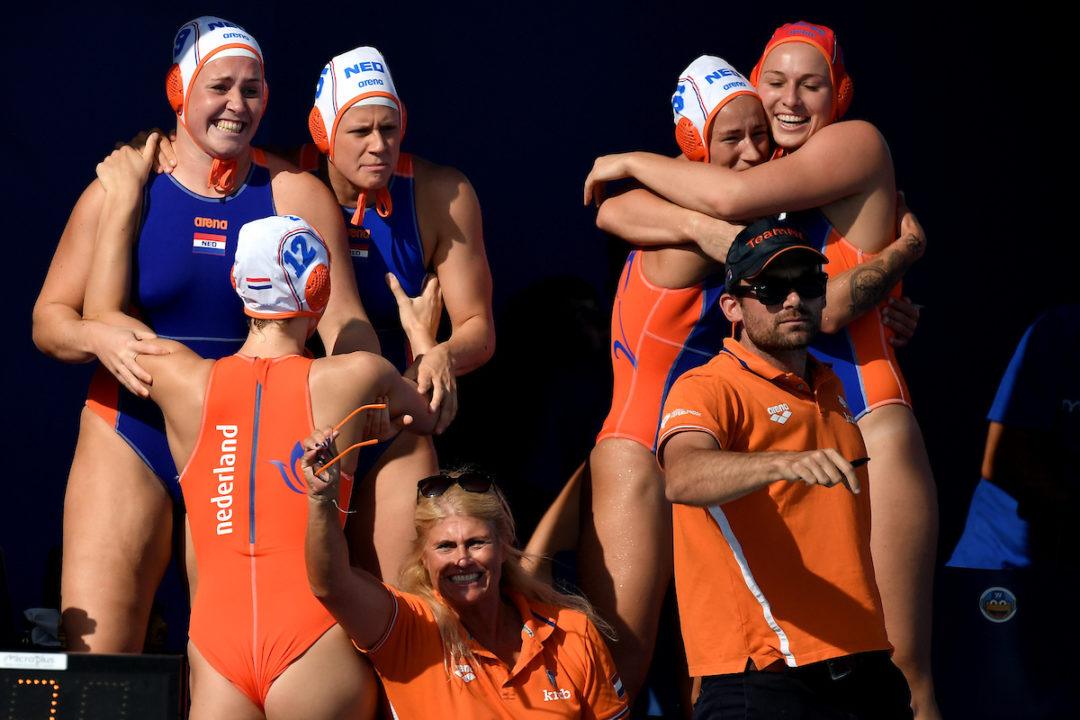 The Netherlands will play in the women’s final for the third time in a row, winning a nail biter against title-holder Hungary in the semi-finals at the European Water Polo Championships in Barcelona. Current photo via Deepbluemedia/ Andrea Staccioli

Recco, Barceloneta and Olympiacos all claimed big wins and enjoy a 10-point lead ahead of the teams sitting in the non-qualifying spots at the halfway mark.

The Netherlands will play in the women’s final for the third time in a row, winning a nail biter against title-holder Hungary in the semi-finals at the European Water Polo Championships in Barcelona. After two lost golden battles in 2014 and 2016 they face Greece, which managed to beat host Spain with some sparkling shotmaking. The Dutch would go for a record-tying 5th title but their first since 1993 while the Greeks are looking for their first ever gold at the Europeans.

The Netherlands made it again, for the third time in a row they reached the final and this time they didn’t even need penalties like in 2014 (against Italy) and in 2016 (against Spain). In the rematch of the Belgrade final, the Dutch kept the game under control, Hungary never led in the match, still, they had chances to force at least a shootout in the first semi-final. The Magyars came back once from 4-2 to 4-4 but the remaining 28 seconds in the second period was enough for the Dutch to retake the lead (5-4).

The Hungarians struggled to put away their 6 on 5s, they were 0 for 6 while the Dutch conversion worked, they netted 5 (three in the 22-24th second of the possession), and with a double in 30 seconds they went 7-4 up deep into the third. Hungary finally made an extra 15 seconds from time for 7-5, halting their scoring drought of 8:14 minutes. And early in the fourth they trailed by one and had another 6 on 5 to go even but Laura Aarts came up with another save and Maud Megens’ blast found the back of the net from an extra for 8-6, with 5:11 to go. The Dutch didn’t score more but the Hungarians pulled back only one and couldn’t add any more in the remaining 3:41 minutes.

The second semi featuring Greece and Spain began in stunning mood: the hosts – who had some minor struggles against France in the quarters – didn’t find the rhythm, the Greeks defended brilliantly around Spain’s most dangerous woman, the center-forward Maica Garcia, and they also withstood the pressure in man-downs. At the other end, even if the home defenders tried to take the ‘same care’ of the Greeks’ ‘lethal weapon’, Alexandra Asimaki, she netted a nice goal and the shots from outside did the damage: late into the second Greece was 1-5 up. At this stage the difference between the goalies was significant: Chrysoula Diamantopoulou had 4 saves on 5 shots, while Laura Ester was 0/5.

And even though Spain began with an action goal in the third, two Greek hits arrived as response in 41 seconds to make it 3-7. And the Greeks could hold on for quite a while as the first save arrived late in the third, by Maria Sanchez since Ester had to be substituted (she left the pool with 0/9).

It was too late and too few: even if the hosts got a bit closer as Beatriz Ortiz netted a man-up but the Greeks had the answers to keep the margin at three before the last three minutes commenced. Soon Ortiz netted a 6 on 4 (her 5th) for 11-9, then Greece gave away the ball in man-up and Spain had 97 seconds to do a miracle. They couldn’t, the Greek defense denied Garcia, then Diamantopoulou finished the match with two saves, she had 9, the Spaniards had 1 – that told the story.