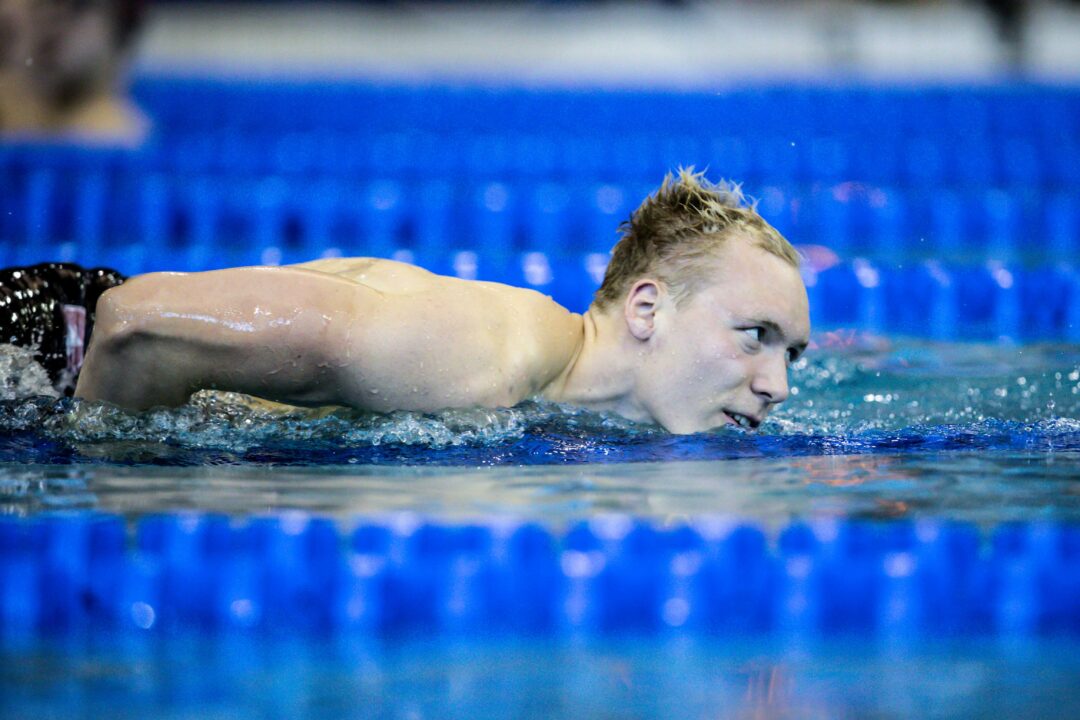 The George Haines International, a meet that was formerly a regular on the Pro Swim Series circuit, has attracted some of the top regional college swimmers. Archive photo via Jack Spitser/Spitser Photography

With the World Championships not an option this summer because of the FINA ban on Russian athletes competing, rising Stanford sophomore (athletics)/junior (academics) Andrei Minakov chose to stay in NorCal and train.

That includes competing this weekend in Santa Clara at the 2022 George Haines International Swim Meet, where he won the men’s 100 fly in 52.23.

That time is well-shy of his personal best of 50.83 in the event. Minakov has struggled to be on his normal form since March’s NCAA Championship meet, where he won the 100 yard butterfly. At the Speedo Grand Challenge Meet two weeks ago, he was only 53.33 in the 100 fly, though this result was better than that at least. The last time he was as slow as a 52 in the 100 fly was in October of 2020, in his first meets coming out of the COVID-19 lockdowns.

Finishing 2nd in that 100 fly was 19-year old Hunter Foehner of the University of Denver Hilltoppers. The Georgia Tech commit swam 54.42, which knocked eight-tenths of a second off his previous personal best in the race.

With the Yellow Jackets’ three best butterfliers from last season, including All-American Christian Ferrero, set to graduate, Foehner was already the front-runner to take over as the lead of that group next season in Atlanta. The team’s fastest returner in the event is Antonio Romero, who swam 48.69 in yards last season. Doehner’s yards best, from March, is 47.83, and his long course progress hints at better things to come.

Foehner’s time missed the qualifying standard for this summer’s National Championships by .03 seconds.

Two-time Olympic gold medalist Tom Shields was entered in this event, but wound up scratching prelims. Shields struggled to regain form this spring after dealing with a bad bout of pneumonia, among other related health issues, at the start of the year. Dare Rose, who was 4th in the 100 fly at the US World Championship Trials in April, also scratched both of his races on Friday, including the 100 fly.

The highlight of the women’s side of the meet through two days was a pair of wins by rising Stanford sophomore Lillie Nordmann. She won the 100 free in 55.41 and the 100 fly in 59.57.

Nordmann skipped the US International Team Trials earlier this year. In the 100 free on Friday, though, her time was a new best by four-tenths of a second. She hadn’t been a best time in that race since a relay leadoff of 55.83 at the 2019 Summer Junior Nationals.

Her swim from Friday ranks her 24th this season among all Americans and 8th among American teenagers.

Cal swimmers Eloise Riley (56.87) and Emma Davidson (56.92) finished 2nd and 3rd in the event. In spite of the disruption in training after their coach Teri McKeever was placed on administrative leave last month, Davidson’s swim was a new personal best.

The top-finishing junior was Bailey Hartman, a high school sophomore, in 57.20. That’s not quite a best time for her, but is a good marker heading into the week where her class can begin being contacted by college coaches.

Struggling or just in heavy training?

I wonder if minakov is targeting US nationals as his big meet this summer. Didn’t sound like he’s rested if at all.

I just checked. The meet where he swam 52 in October 2020 was Russian National Swimming Cup. That sounds like a much larger meet than Santa Clara Invites, especially cosidering that he perhaps didn’t have any other racing opportunity in that year.

And I don’t think there are many Invites in Russia, so we don’t know how he typically swims in season. According to swimranking.net, his sub-52 swims were all from either Russian Championships or international competition.

This has to be one of the slowest Santa Clara summer Invites in its history, which has been storied.

The great Santa Clara, and LA Invitational meets were the two best lead-up meets to the Summer Nationals and National Team selections and even drew some great out of towners and international competitors. The early team selections have opened up meets like these so younger talent can get more prelim-final big meet experience.
Think back to the great entries like Schollander, Burton, Meyer, Stamm, Atwood, Simmons, Shaw, Naber, Babashoff, the Furniss brothers, Hencken, Job, Meyer – the list goes on and on. Those were great meets……

“Andrei Minakov chose to stay in NorCal and train.”

Agree with other commenters – 52.2 is a great swim for Minakov right now.

You would think Lasco being 2:04 in the 200 back would be more worthy of some of the framing they gave a 52.2 100 Fly. Just to be clear I wouldn’t support that either, just saying it’s odd.

Minakov is Russian, Lasco is American

Meet looks small, gone are the glory days of the meet and club.

In its glory days, swimmers broke world records and US open records in Santa Clara

The days of the multiple Olympians at one club, yeah probably. But the current staff is bringing the team back to a respectable position, a good number of kids have left QSS and gone back already.

Santa Clara used to be an elite international meet with top swimmers from other countries competing, especially Australians. Cate Campbell broke 100free US open record swimming 53.3 as 15 yo, that was only broken 5 years ago by Sjostrom.

Oh I thought you were talking about the club. The meet was pretty packed until a few years ago, when Bitter got caught with the crap he was doing.

The club decline has been going on for years. I see not end to the bleeding.