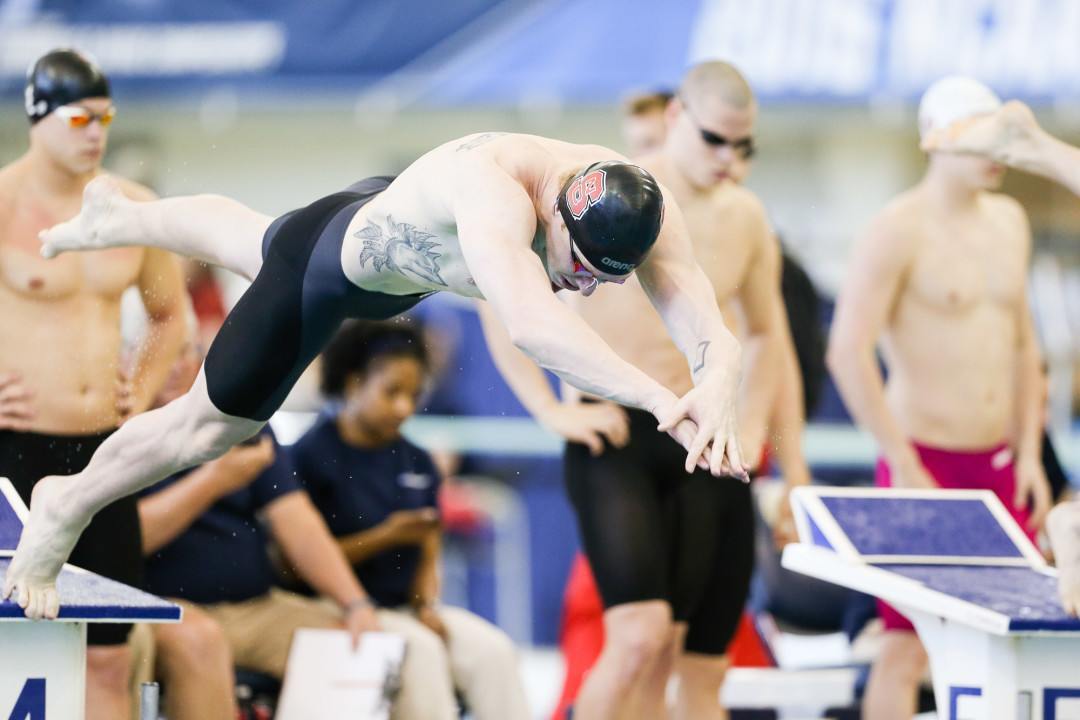 The team race intensifies as NC state slightly out swims Texas during the Thursday morning session of the 2016 NCAA DI Championships. Current photo via Tim Binning/TheSwimPictures.com

Texas Vs. NC State. Each team had three swimmers under 19 seconds and a fourth swimmer in the low 19’s.

California loaded up in this event, placing Josh Prenot, Ryan Murphy, and Andrew Seliskar into the A final and Jacob Pebley into the B final.

Caeleb Dressel may have rattled his own American record this morning, but it was NC State that really shined, putting Simonas Bilis and Ryan Held into the A final and then Andreas Schiellerup into the B final.

While the top four teams continued to separate themselves by earning two A final relay appearances, NC State managed to out swim the rest of the field during the prelim session, putting three swimmers up and four swimmers down. They also burned fewer swims than any of the other top 5 teams. Texas and Florida also had strong morning. The longhorns will have more swims tonight, but the Gators have an extra A final swim which will give them a boost.

NC State has 4 individuals down, I believe.

You are correct, thanks!

Divers Texas 1 up and 1 down

Good notes on the “burned swims” to support general understanding. However, the example provided on the 500 free was incorrect – Cal burned 5 (not 1) swim. And of course, being a Cal fan, I can’t avoid the following dig: Stanford is not in the top 12, so their burned swims are not calculated/tracked…so sorry Cardinal…

It’s also wrong when they said that Stanford had no one up in the 500 free.

AFAIK there are NO swimmers under 18 seconds, let alone the 6 reported on NC State and Texas.
Perhaps you meant 3 swimmers each under 19 seconds.

Texas will get points from divers 1up and Bowersox is locked in at 9th.

for the last time, GKOLOMEEV IS YOUR TEAM!!! when you take him off relays bad things happen.