NAIA Champion Thatcher Thanks SCAD For Support Before Mormon Mission 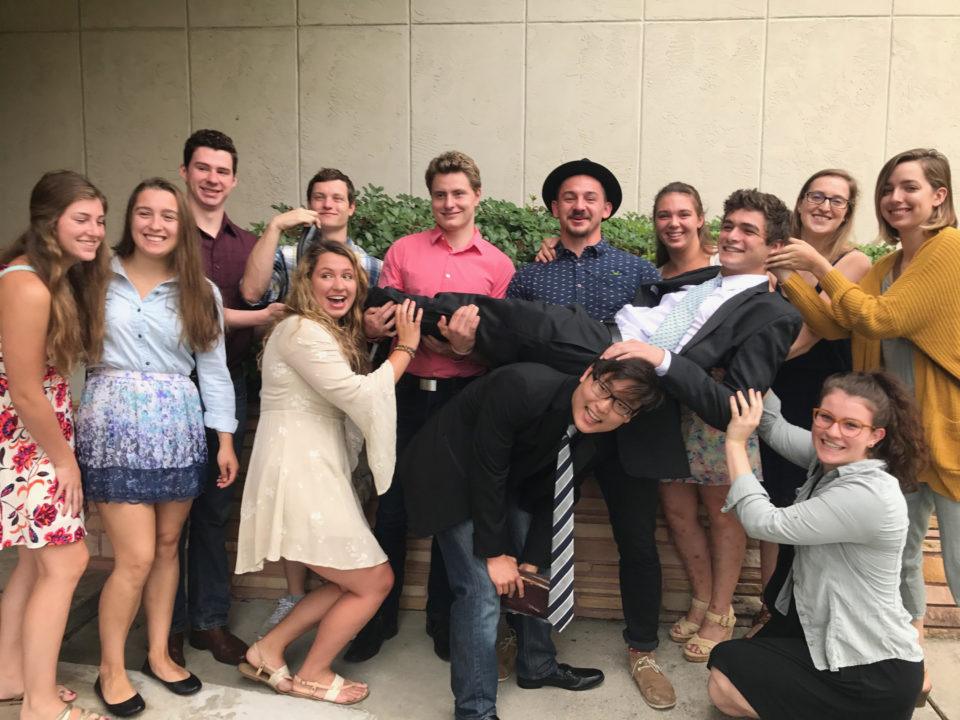 Author’s Note: After winning two record-breaking national championships his freshman season, SCAD’s Joel Thatcher will be leaving the team and swimming for two years to serve a Mormon Mission in Cusco, Peru. The following is excerpted from a “farewell address” to his local Savannah, Georgia, congregation of The Church of Jesus Christ of Latter-day Saints on Sunday, May 21. Fifteen of his SCAD teammates were in attendance and much of his talk was addressed to them.

I will be leaving on my mission to Cusco, Peru in just 23 days.

I want to start my talk today by sharing two of my favorite scriptures from the Book of Mormon. The first is a story of a great king named Benjamin. He lived in a time when the people were very close with God. Toward the end of his life, he gave a long and moving speech to his people. At the end of his speech, his people responded by saying, “Yea, we believe all the words which thou hast spoken unto us…because of the Spirit of the Lord…which has wrought a mighty change in us, or in our hearts.”

The next is the tale of a man named Alma. Early in his life, Alma spoke openly against the church, and criticized all those that believed. Much like Paul in the New Testament, he was visited by an angel who told him the error of his ways. After hearing the words of the angel, Alma experienced what he described as a “mighty change of heart.” This is how he described a changed heart: “A change of heart is like…waking out of a deep sleep; being filled with light; being freed from chains; having your soul expand; being born of God.”

The greatest thing about belief is its ability to change people…to make them better. And a mighty change does not have to only be about a church or spirituality. It can be about any aspect of our lives. I’d like to share an example of this from my life, and, of course, because it’s from me, it has to be a swimming story.

Now, I realize that you all have only known me as the type of swimmer that I am now. None of you have ever met “slow Joel.” This Joel existed around the end of my freshman year of high school.

To be honest, I just wasn’t enjoying swimming. I was training hard and just not getting any faster. Every practice just felt horrible. The training just kept adding up. I felt like I never had any recovery. I just was not enjoying the sport.

Then, in the middle of my Sophomore year, I was coming off one of the worst meets of my life. I just swam awful. The next week I was in a scripture study class at church when we came across the scriptures I just spoke about in the Book of Mormon. These were the exact words that I needed to hear at that moment in my life.

It was then that I took a step back and re-evaluated how I looked at swimming. I decided to stop worrying and stop thinking so much about the sport, but to just focus on the things that I loved about it. For, me this was racing. I turned practice into a game, I looked at every set as an opportunity to race my training partner. Instead of looking at a hard set and thinking about it all at once, I just looked at it one step at a time. I stopped thinking so much about everything and learned to trust my feelings instead. I began to have fun swimming again.

This was when my swimming turned around. Don’t get me wrong, there were still plenty of times when it was hard, or it hurt or I just didn’t really feel like it. But by having this “mighty change” in my heart of how I viewed swimming, it made these days much less common, and much more bearable when they did come around.

I felt like Alma in the Book of Mormon. He described this feeling of a “mighty change of heart” this way: “My soul hath been redeemed from the gall of bitterness. I was in the darkest abyss, but now I behold the marvelous light of God.”

I will also say this: It was not only in the pool that this changed benefited me. I found that in my everyday life I began to look at things much in the way that I began to view my swimming. I stopped worrying so much about everything and just began to roll with the punches.

Now, a change like this is not easy. Old habits sneak back. A Mormon leader by the name of Elder Dale G. Renlund, who is a heart surgeon, once talked about what happens when people change their heart quite literally.

“Left unchecked, the body’s natural response will reject the new heart, and the recipient will die. Medicines can suppress this natural response, but the medications must be taken daily and with exactness.”

“Surprisingly, some patients become casual with their transplanted hearts. They skip their medicines here and there and obtain the needed follow-up less frequently than they should. They think that because they feel good, all is well. Too often this shortsighted attitude puts the patients at risk and shortens their lives.”

This is true with a spiritual change of heart as well. Once you decide to change, you have to stick to it, otherwise, the desire for the change will fade and you will revert back your old habits.

As you sit here in this chapel and perhaps wonder why I am choosing to serve a mission where I’ll be serving the people of Peru and teaching them about Jesus Christ and the Book of Mormon, I’d like you to know that this mission is about changing hearts. In fact, let me share one more quote from one of our leaders. His name was Ezra Taft Benson and he was President of our Church just before I was born.

“Can human hearts be changed?” he asked. “Why, of course! It happens every day in the great missionary work of the Church. It is one of the most widespread of Christ’s modern miracles.”

And lastly, and hardest of all, I am choosing to say goodbye to my great coach, my great team and my amazing family for two years.

But, I know, that despite how much of a sacrifice this is, it is also a great blessing. I believe that the true purpose of a mission is to change hearts, both my own heart and the hearts of others. I believe that even if I am to only change one person’s heart over two years, that this sacrifice will be well worth it.

The Book of Mormon is the word of God. It testifies of Jesus Christ. The stories in it have the power to change people’s hearts, as they have changed my heart. I would challenge everyone here, even if you are not a member of this church, to read it for yourself. You can find it on the Gospel Library App for your phone or you can ask any Mormon missionary for a copy.

Lastly, and I’m talking especially to my swim team here today with us in this chapel, we have spent hours and hours together, both in and out of the pool. I will miss you all so much. And to you Coach Bill, you are the best swim coach I have ever had. Thank you for everything that you’ve done. Thank you for supporting me and my decision to serve.

Joel, I’m a distant Thatcher cousin from Utah. Thanks for your example and faith. I know the Lord will bless you while you serve Him.

Joel
This message is inspirational and I wish you all the best on your mission trip. May the Lord bless you and keep you safe on your journey.

Phenomenal article. I’ve known Joel for four plus years and have loved seeing his growth and maturity. You can see how the gospel of Jesus Christ is real and the impact he is already having around those he associates with. God’s speed brother!

Great swimmer and person, wish him the best of luck!!