Mixed Reactions From Spectators as Lia Thomas Wins the 500 Freestyle 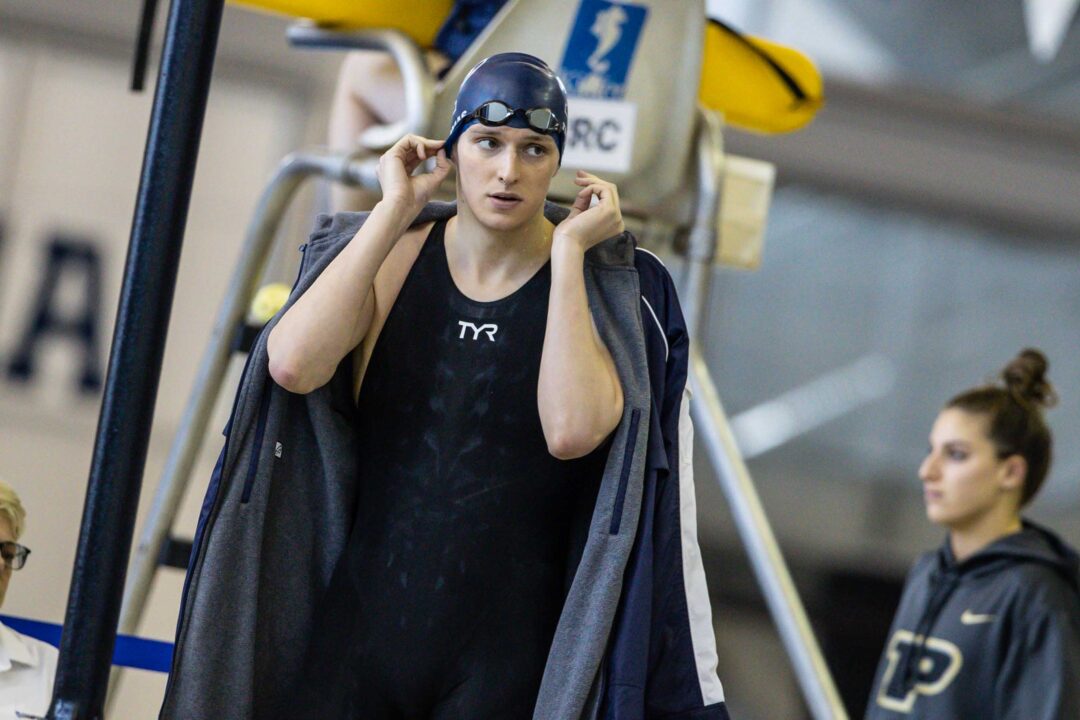 Lia Thomas became the first openly transgender swimmer to win an NCAA title. Thomas will race in the 200 and 100 freestyle later on in the meet. Current photo via Jack Spitser/Spitser Photography

In the first event of Thursday’s finals session at the Women’s NCAA Swimming & Diving Championships, Lia Thomas of the University of Pennsylvania won the 500 freestyle (4:33.24). Thomas is now the first openly transgender swimmer to win an NCAA title.

Prior to the race, there were no shouts from the stands. This morning, someone yelled “cheater” while Thomas was on the block. As Thomas raced, “Save Women’s Sports” founder Beth Stelzer entered the aquatics facility with a large black flag with text saying “Save Women’s Sports.” She attempted to hang the flag over the railing, but was asked to remove her flag by an event staff member. She was asked to move it because it was blocking the railing.

When Thomas finished, someone shouted from the crowd “He’s a man,” and a “protect girls sports” chant began from a few spectators. There were also a few underlying “boos.”

During the podium ceremony, the aquatics center erupted for 2nd place finisher Emma Weyant of Virginia (4:34.99). When Thomas was announced, there was polite clapping, including a group of parents of Virginia swimmers.

Thomas spoke during the on-deck post-race interview. However, Thomas declined to speak to the media in a press conference after her race. Per the NCAA media guidelines, “Champions of each individual event and relay are required to participate in a press conference in the interview room shortly after the conclusion of their event (following awards podium and optional warm-down swim).”

It is an NCAA Championships rule for the winner of each event to speak to the media at a brief press conference.

The NCAA Swimming and Diving Committee Chair declined to comment on Thomas declining to speak with the media. Thomas’s decision will be discussed at an upcoming committee meeting, which will not occur until a few weeks after this meet.

It is grossly unfair that we are not allowed to have concerns about the fairness of this issue without being labeled transphobic. The reality is that a swimmer had years and years of increased testosterone that effected her height, the size of her hands, the size of her feet, her lung capacity etc. if a cis female supplemented the same amount of hormones, she would be banned from competition.

I truly admire Lia and she should have the right to live her gender identity. But we can’t always have everything we want or need at the same time. I’m sure most trans individuals would tell you that they have made sacrifices in order to live their lives. And there… Read more »

Didn’t Forde come out publicly and welcome Lia to race her … looking forward to it, in fact? So you would think that the podium pic with Lia standing alone with the other 3 standing together on the third place step … why didn’t Forde stand with Lia since she was supportive?

You do know that pictures are an instant in time, right?

The 2-3-4 finishers were all Olympic teammates. They just wanted a picture of the three Olympians together. Two of the three people in that picture (Erica and Brooke) said they were fine with Lia competing.

That photo has been used to ascribe a certain emotion upon its participants, but the reality is that Lia wasn’t an Olympian and therefore wasn’t part of the Olympians photo.

Younger swimmers beat older swimmers ALL THE TIME. Did you see 15 year old Katie Ledecky swim in RIO?
What does your statement have to do with Lia Thomas?

So if someone like Tomoru Honda decided to transition, would y’all be as upset? He’s probably shorter than many of the athletes in the competition and likely has smaller hands. Are his lungs bigger? I’m sure we can dissect them after he’s dead but that doesn’t seem to be a major factor? Is he stronger? Maybe if strength was everything in swimming, people like Anthony Ervin would never have won anything and we’d have a lot more bodybuilders.

I remember hearing a lot of arguments in the past about black athletes who had too much muscle and that’s why they couldn’t swim fast or weren’t buoyant enough. So can we have too much muscle or does there have to… Read more »

How many women could actually get away with refusing to speak at a required press conference? Those of us around longer than a decade know that it is zero. So shameful that misogyny is in full force and so many endorse such lunacy. Shame on the NCAA, Penn, and even Lia who knows what she is doing wrong here.

The mention of Title IV has given me flashbacks to filling out a FAFSA and I’ll never forgive you for that reminder.

I think you are missing the part about fairness of competition. Just about everyone has the option of an extra year of eligibility. That doesn’t hurt the overall sport. Having transgender women compete against biological women absolutely has the ability to damage the fairness of competition in particular sports. And in this case, there is zero doubt that it did. Read Nancy Hogshead’s article on this — I think she brings a very valuable perspective to the issue.

doesn’t really work to compare the two – you’re comparing one that was born with completely different physical traits (that allow them to be bigger, faster, stronger) going to compete with people that were not born with those physical traits, to a 22 year old male competing against a 23 year old male (or 22 y/o female to 23 y/o female) Sure, 18 year old freshman also have to compete against 22 and 23 y/o’s, but we know that there isn’t a signficant difference, and in most cases no difference at all. I played college basketball and while I became a smarter player over my 4 year college career, I was no more athletic and still at a similar skill… Read more »