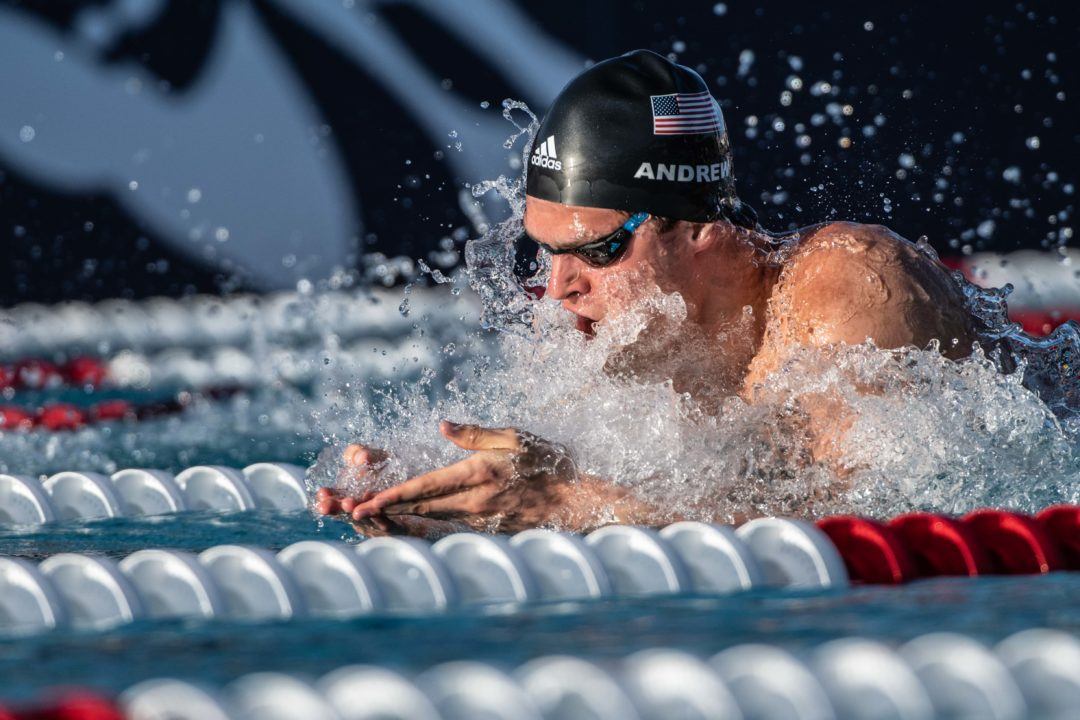 Missy Franklin had a further two races in day 2’s preliminary session at the 2018 Mare Nostrum Series in Canet, France. After swimming the 200 distances on Saturday, she swam the 100 free and the 100 back on Sunday morning.

In the 100 free, where she’s never won an individual medal internationally, she qualified for the B-Final 11th in 56.44. That put her two-and-a-half seconds behind the top qualifiers, which were a pair of 18-year olds Rikako Ikee from Japan in 53.89 and Taylor Ruck from Canada in 53.92.

France’s new National Record holder Charlotte Bonnet qualified 3rd in 54.31, and the 2nd Canadian Kayla Sanchez was 4th in 54.41 before the times dropped off.

Right you are! Fixed above.

Really cool to see Missy back. Swimming I think is somewhat of a love hate relationship – she seems to back to loving it again

These times in 100 back and free of Missy Franklin brings us back to her high school freshman or even pre high school era. It doesn’t matter actually unless it will be another book about her return. Whatever reason of her slowdown was it is irrelevant if she swims again and improves no matter how much. It’s a courage actually to comeback at so low level. More frequently we see swimmers are quitting under such circumstances. But there is some strange, or to put it differently, unusual thing in Franklin’s case. Typically when swimmers slow down because of aging, injuries or some other health issues they are leaning to compete in shorter distances. In contrast, Missy Franklin showing terrible times… Read more »

It’s much easier to criticize than actually do. She has said she is swimming for different reasons now considering all she has been through. Give the woman a break- just had double shoulder surgery, moved to Athens, and is going to school. That’s a lot of adjustment in my book. At this point in time, sure Jack is telling her not to judge progress by the clock. If she shouldn’t do that, no one else should either.

The problem is – she’s still raking in cash as a result of being a professional athlete. You want to sell books, tickets to your speaking tours, suits? There’s lots of women in this country battling with depression and injury. The difference with Franklin is that she’s a fast swimmer. We can’t pretend like that’s not part of it.

As soon as she stops collecting checks for being a fast swimmer, we’ll be ready to stop putting pressure and expectations on her swimming times.

There is a small handful of swimmers who have ever walked the earth who are more accomplished than Missy. A lot of people in sports, and business for that matter, get paid for past performance rather than future performance. Missy deserves every penny than she makes for being a fast swimmer, as well as a role model for young swimmers. I wouldn’t write her off based on a prelims session at her first meet back. Her splits to her feet in the 200s yesterday weren’t all that much slower than her 100 times this morning. I think that there is more in the tank for her now, and this is a stepping stone meet. She may or may not get… Read more »

As soon as she stops collecting checks for being a fast swimmer, we’ll be ready to stop putting pressure and expectations on her swimming times.

Unless you work for Speedo, are Missy, her parents, or her agent, you don’t know what Speedo’s expectations are in her sponsorship deal. I, for one, was thrilled to read a quote from Missy in the last couple days saying she simply does not care what other people’s expectations are, because she cannot control them. So: Get over yourself. You don’t own her, and she doesn’t care what you think.

Being a fast swimmer is not why she’s getting paid. When someone wins an event, that is getting paid for being a fast swimmer. When someone gets sponsorship checks that is marketability. A ton of retired athletes are still “raking in cash” as you put it. Fail to see why that’s a problem. Depressive episodes affect performance. Depressive episodes cause other bad things to happen too. RIP Anthony Boudain. You really should get educated.

I’m assuming you don’t follow baseball. The MLB is the best example of being paid for prior performance. Since all MLB players are paid terrible at the beginning of their careers, including through arbitration, It makes sense when they are overpaid afterwards. There’s a ton of examples, but a few are Mark Teixera, Jacob Ellsbury, Hanley Ramirez, Albert Pujols, Joe Mauer, Victor Martinez, Matt Kemp, Pablo Sandoval, . Since the majority of sports (Including swimming when the swimmer emerges during the NCAA) don’t pay out until you have done the majority of your performance, I think its fair to ‘objectively’ overpay later. Missy made NOTHING when she won 4 golds in the 2012 London Olympics and 6 golds in the… Read more »

Yozhik — I think you should ask yourself why you feel you need to put all this negativity out into the universe.

Before I ask myself this philosophical and not easy question can you help me by answering some practical question? Why is it so that there is so much excitement about pretty much ordinary case in the history of competitive swimming? The swimmer had six (not short period actually) years of successful career at elite level. That resulted in two individual Olympic gold medals and four individual world titles( in three world championships). Then as the consequence of most likely natural biological processes her performance began declining to the level of her high school meets. Absolutely nothing new. The world swimming and American swimming in particular have plenty of examples of much brighter swimming carriers that ended eventually. Sometimes prematurely. And… Read more »

I don’t worship at the altar of Missy. She’s just a person navigating her way through this life the best way she knows how. However, I’m a sucker for a good comeback story. Stop resenting her notoriety and enjoy the ride.

She’s attractive and charming and thus super marketable. Good for her. The instinct to hate on someone for that is kinda gross, tbh