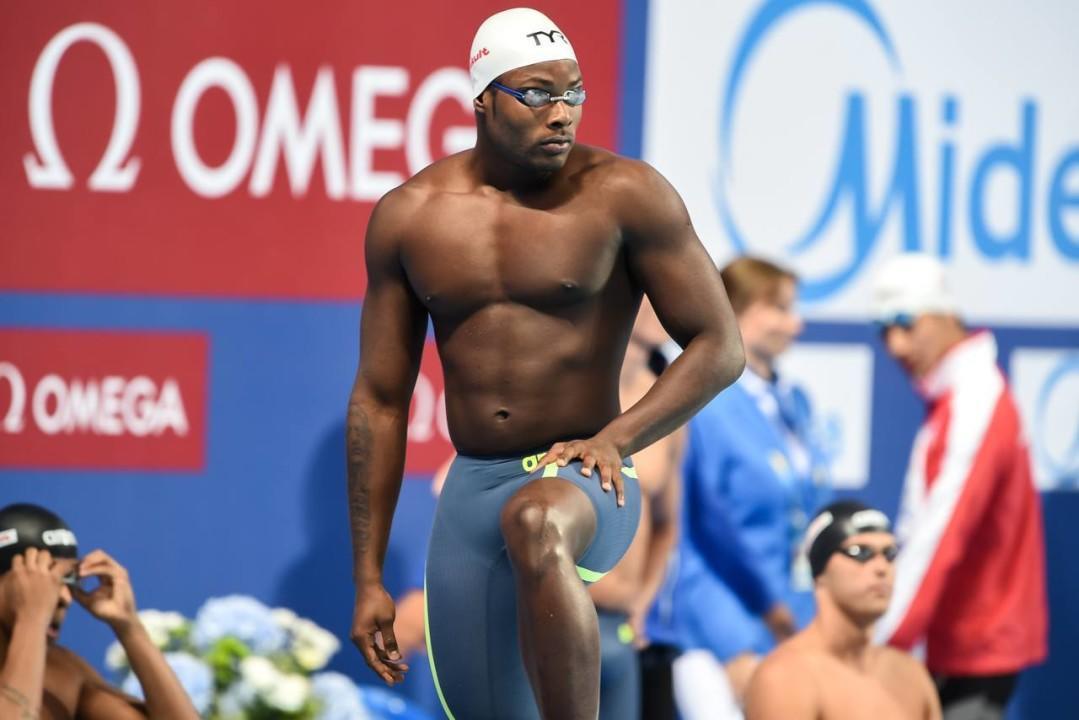 As expected, sprint standouts Mehdy Metella and Jérémy Stravius put on a show in the 50 fly. Archive photo via Peter Sukenik/www.petersukenik.com

The 2017 French Elite Long Course Nationals are underway, as Tuesday marked the first day of competition in Strasbourg. Swimmers gathered on day 1 to compete in the men’s 400 free, 50 fly, and 200 back, while the women competed in the 100 breast, 50 free, and 400 IM. Read on for highlights from day 1 finals.

As expected, sprint standouts Mehdy Metella and Jérémy Stravius put on a show in the 50 fly. The 2 swimmers battled closely into the wall with a nailbiter finish. In the end, it was Metella who got his hand on the wall for the gold, touching in 23.61. Stravius was just shy of his prelims time as he took silver in 23.71.

A 3-man battle in the men’s 400 free saw Jordan Pothain, Joris Bouchaut, and Damien Joly race neck-and-neck down the stretch. Pothain and Joly led the way through 300 meters, but Bouchaut made a huge move with a 57.03 final split to keep things interesting. At the finish, Pothain was able to hold him off, winning the race in 3:50.06. Bouchaut did, however, run down Joly for silver, as he posted a 3:50.65 to Joly’s 3:50.80.

On the women’s side, Anna Santamans lowered her season best by 2 tenths, winning the final with a speedy 24.71. With that, Santamans has cracked the world top 10, moving up from 12th with her prelims time to 9th with her time in tonight’s race. Behind her, Melanie Henique tied her lifetime best as she picked up silver in 25.11. Rounding out the podium was Texas A&M-based Béryl Gastaldello in 25.22.

Also qualifying for the 2017 FINA World Championships in Budapest was backstroker Geoffroy Mathieu, who cleared the qualifying mark in the 200 back after winning with a 1:57.04.

Additional event winners on day 1 included Fanny Deberghes, who captured gold in the women’s 100 breast, and Fantine Lesaffre, who won the 400 IM. Deberghes unleashed a 1:09.18, outpacing Charlotte Bonnet (1:09.57) and Solène Gallego (1:09.69) on the back half to take the 100 breast title.  In the women’s 400 IM, Lesaffre cleared the FINA A cut, winning the event with a 4:41.64, but didn’t qualify for Worlds based on the French Federation’s standards.

A lot of very average swims on that day 1. Biggest disappointment coming from Jordan Pothain in the 400 free. Bad time in 3.50. No qualification. Our best female breaststroker in 1.09. Nothing new.

What has happened to french swimming. They were great in 2012, then slowly declined, but in 2016 they just disappeared. It’s a shame

they had a era of great talent from 2008-2016. Now that talent is older or retired. Not every country has the resources, talent pool, and structure of the US that allows them to generate world level talent year after year. The NCAA system basically guarantees that the US will always be able to maintain great rosters. The decline happened to the Aussies after 2004 and now it’s happening to the French. Although the Aussies seem to have talent these days, but have trouble performing at the highest level

I would add that the French have never had great strength in depth. As you say, they simply don’t have the resources. As such they have tended to rely on a few stars, with perhaps the exception being the sprint free relay.

Added to that, the management hasn’t been great. One of the biggest disappointments of Rio for me was the inability to get their swimmers performing at their best on the day. Apart from Pothain’s 400 free, did anyone else even swim a PB? Certainly not many…

Not sure where the medals will come from in Budapest. The 4×100 free relay looks at least a man short. Lacourt in the 50 back? Metella? Stravius? Maybe Bonnet in 200 free?… Read more »

And Thomas, if you are French, welcome to swimswam. 🙂

Welcome to new commenters from all other nations too. 🙂
But sometimes coming from France I feel a little bit alone among all these Americans. 😆
And I’d like to see more French swim fans comment on swimswam.

Sort of French, with a bit of British, Australian, German and Irish thrown in. But more French than anything. Thanks for the welcome 🙂

I thought the FFN had set out their own qualifying times for the Worlds? Quite tough ones too, they’re mentioned in other articles about these champs. And the DTN has said they would stick rigorously to these (unlike say last year). Today, Santamans and Mathieu qualified, surprisingly in the latter’s case I think. Nobody else got that close to the QTs, though Metella and Stravius have stronger events coming up later on in the week, as does Bonnet. Pothain will also get another chance through the 200 free, and maybe as part of the 4×100 free relay.