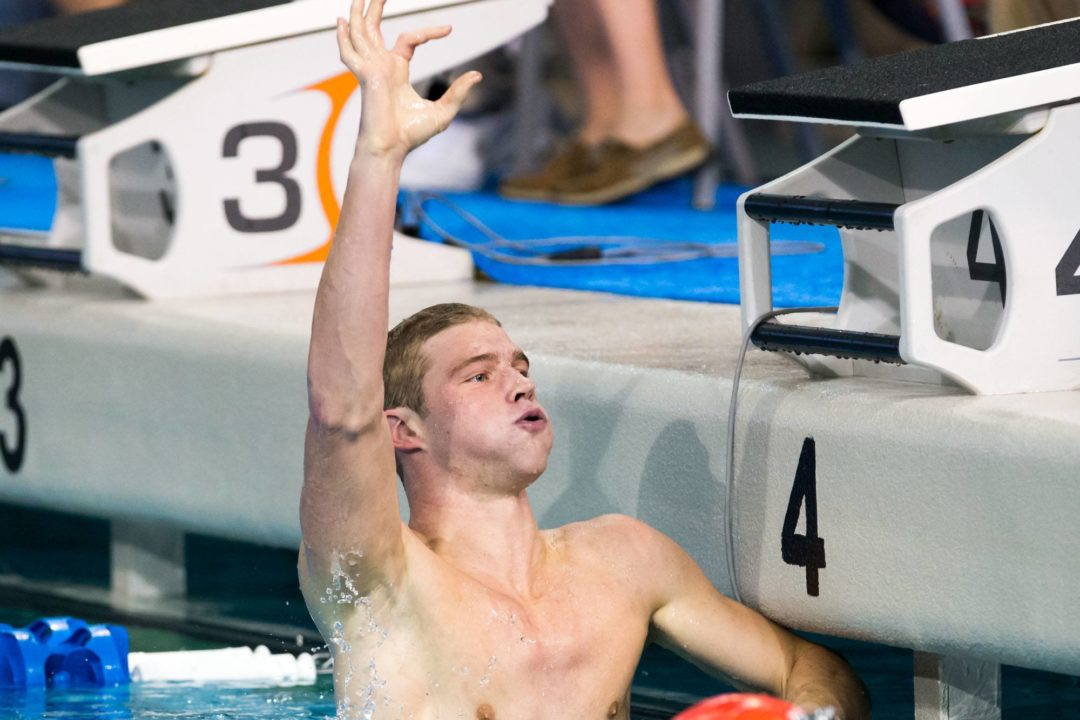 The big meets in 2014 will be critical for Kevin Cordes to establish himself on the world stage in the 100 meter breaststroke. In yards, there is no competition, Cordes is the man! In meters, however, he is good but not yet great. All eyes will be on him this year as he swims the 100 and the 200 breaststrokes. The US has been in search of a dominant breaststroker to fill the void left by Brendan Hansen, and Cordes may be their answer.

Cordes has done well on the international stage for his age, but there still have been a few hiccups in his international career including a relay dq at Worlds last year. Pan Pacs and another year of experience will help him as he looks towards the 2015 World Championships.

Last year, Cordes had the 6th fastest time in the world in this event with a time of 59.78. He and Nic Fink were the only two swimmers representing the United States to break the 1 minute barrier. A 59 high is not going to cut it for a podium this year, and it’s definitely not going to cut it next year at the World Championships. Eric Shanteau’s American record is set at 58.96 from the 2009 World Championships, and that should be the target to hit at nationals this year. Cordes has already been 1:00.91 this season, putting him within striking distance.

Nic Fink is my second pick this year. He is another younger male swimmer as he will be entering his senior year at the University of Georgia in the fall. He managed to qualify for the 2013 World Championship team and dropped to a 59.84 in Barcelona, which at the time was a surprise. He had the ninth fastest time in the world in 2013. He has been consistently dropping a little more than a second for the past few years, and I expect he may not drop over a second this year, but cutting a half second or so is a possibility.

Mike Alexandrov has the most domestic international experience on this list. He has competed in several international competitions representing Bulgaria and is now representing the United States athletically. He was a member of the 2013 World Championship team, and has shown year after year that he is a consistent performer. The fact that one Olympic Games makes him a “veteran” in this group shows just how long the U.S. has relied on Hansen. Take a look as Alexandrov’s 5 year progression in this event:

In addition to his international experience, Alexandrov races a lot domestically. He seems to show up and be competitive at nearly every big national and even regional-level meet, something not afforded to most of the contenders because of school schedules.

I believe Cordes and Fink will be closer to 58 rather than being 59 high again, but Alexanderov could fall in that 59 high range. History would suggest that he will be right at 1:00 again, but he has had a solid year and has already posted a 1:01.38 this season. That is the second fastest time this year from an American swimmer.

Bj Johnson, Brad Craig, and Cody Miller are all members of the US National Team in this event. I expect them to all finish right around the 1:00 minute mark, whether that be just under or just over.

Carsten Vissering is the youngest swimmer on this list, but don’t count him out because of that. This soon-to-be highschool senior has amazing short course yards breaststroke times and is a major contender in the long course pool as well. Just take a look at his 5 year time progression. Carsten Vissering is someone that you should not look over this year.

Josh Prenot is similar to Nic Fink, he is a talented collegiate swimmer for California that has shown consistent improvement over the last few years.

The Longshots: These are the swimmers that would have the crazy 50:1 odds if this was a horse race and gambling was allowed. They are not necessarily very likely to win, but they could really surprise some people.

Hard to argue with the top three here, although I wouldn’t be shocked if Vissering ends up there, or very close.

Yes I agree I think Vissering could surprise and make a run at making the Pan Pac team. Maybe a bit early but he can certainly compete for those top spots this year.

WOW at Austin Temple’s big gaps, he must be a very good taper swimmer or just improves loads every year…!!! Does anyone know?

Looking at his times and years, it seems like Temple simply started late compared to most elite swimmers.

Regarding Temple, pretty sure he didn’t start swimming club until high school, maybe as late as sophomore year. The Virginian-Pilot has done a few stories on him, if you want to search for those.