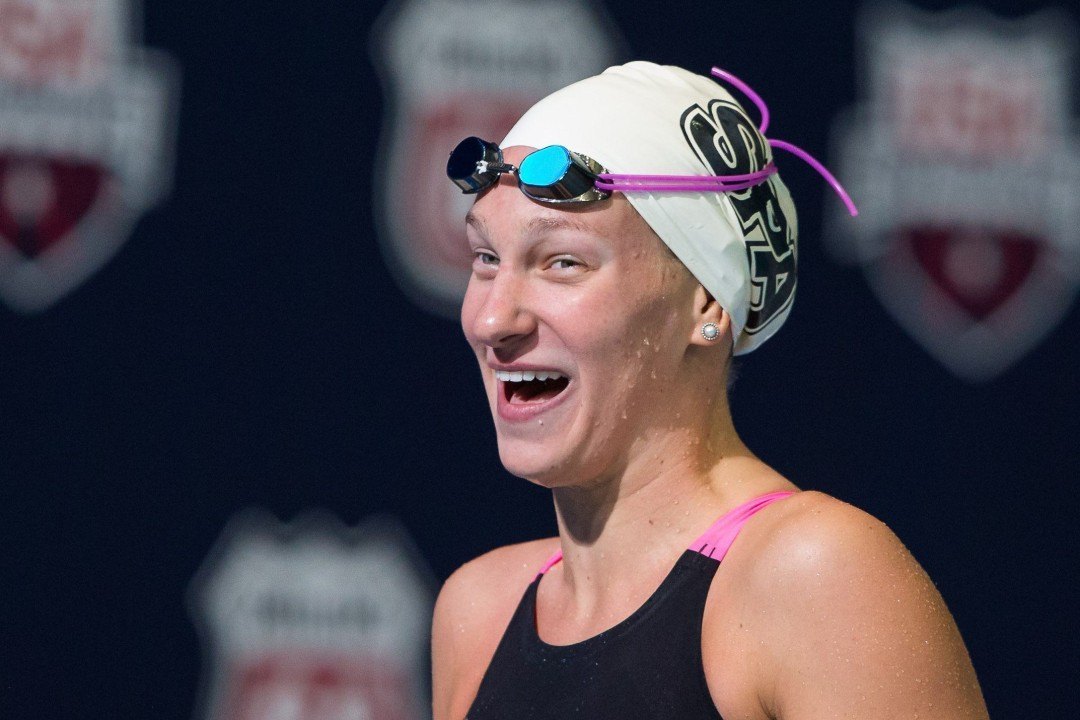 Melanie Margalis continued her run of dominance at the Speedo Sectionals in Athens, GA, winning her fourth gold of the meet so far in the 100 breast. Archive photo via Tim Binning/TheSwimPictures.com

Melanie Margalis continued her run of dominance at the Speedo Sectionals in Athens, GA, winning her fourth gold of the meet so far in the 100 breast.

That came in a big win over SwimMAC’s Micah Lawrence, the defending U.S. National champion. Most of Lawrence’s SwimMAC teammates headed home to Greensboro, NC before tonight’s session, but Lawrence stuck around to challenge Margalis.

Margalis, swimming the Georgia pool where she starred as a Bulldog in the NCAA, went 1:07.35 and did what few swimmers have – overtook Lawrence over the final 50 meters. Lawrence led by a tenth at the turn, but wound up second in 1:08.28.

A couple more Georgia Bulldogs had great showings on Saturday night. In the men’s 100 breast, U.S. National Teamer Nic Fink went 1:01.68 for the win, just beating out Auburn’s Michael Duderstadt. Duderstadt tied his lifetime-best with a 1:01.91 for second.

Matias Koski added to his win total for the weekend, going 3:50.97 to win the 400 free. That came after top morning seed Connor Jaeger was a scratch for the finals session. Dynamo’s Kevin Litherland, yet another Georgia Bulldog, was second in 3:51.14.

North Carolina Tar Heel Hellen Moffitt hit another lifetime-best, going 59.29 to win the women’s 100 fly. Moffitt already went a personal best in prelims, and cut .06 off that time in the final.

The men’s race went to Club Wolverine’s Goeff Cheah, who competes for Hong Kong internationally. Cheah was 53.38, eking out a win over his Wolverine teammate Aaron Whitaker (53.51). SwimMAC’s top-seeded Tim Phillips and Ryan Lochte scratched the event at finals.

The first event of the night went to Lakeside’s Leah Stevens, an incoming freshman with the Stanford Cardinal. With the deferral of Katie Ledecky in that Stanford recruiting class, Stevens will be one of the program’s top distance threats, and she went 4:13.82, only about a second off her lifetime-best.

Stevens also helped Lakeside win the 800 free relay, splitting 2:03.34 on the anchor leg. Asia Seidt was 2:02.52 on her leg – Seidt was recently ranked inside our top  20 recruits in the nation for the ongoing college recruiting season. Lakeside went 8:16.32 as a team.

The men’s relay went to Hilton Head Aquatics (at least according to Meet Mobile, which doesn’t list a time for the Club Wolverine relay). Hilton Head went 6:36.76 for the title.

Backstroke i would imagine. She has gone 2:10 several times last summer and this summer. She needs to get to the next level…..medaling at Worlds.